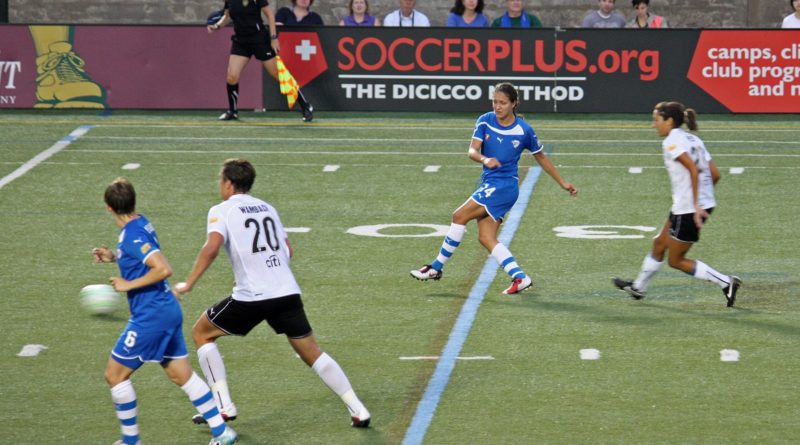 Stephanie Cox had been cut from the U.S. National Women’s Soccer Team in 2012 and began searching for a way to get back. So she reached out to a coach she trusted about her worries — what was she missing? What got her cut? How can she make sure it doesn’t happen again?

She’s used that since, writing it in her player journal after tough practices with the OL Reign FC, where the 35-year-old mother of two plays defender after helping the U.S. national team earn the gold medal in the 2008 Olympics.

Cox is back playing with the Reign after five seasons coaching the Gig Harbor High School girls soccer team, which included winning the 3A state championship, the school’s first, in 2018.

She stopped by SBLive’s The Preps Lab with TJ Cotterill to discuss how to teach work ethic, what has motivated her the best throughout her career to push herself, how she motivated her players in her time at Gig Harbor, as well as how she’s seen some of her teammates at the professional level, players such as Megan Rapinoe and Carli Lloyd, develop their work ethic.

Gonzaga Prep boys basketball coach Matty McIntyre joined to talk about building toughness in a program and getting players to buy in to being program- and team-first using his Defining Dozen. He also talks about how Dick and Tony Bennett influenced his Pack Line defense and how he’s continued to have success with it as more programs evolve into “modern” basketball strategies, playing with pace and space.  Statewide coverage of Washington high school sports: https://scorebooklive.com/washington/Follow host TJ Cotterill on Twitter: @TJCotterill  Download the SBLive Sports app on iPhone and Android, your national home for high school sports news and information.

1:45: How Stephanie Cox developed her own work ethic and motivation to get to where she is today

7:30: Getting the most out of conditioning withing skill development in practice and not using it as a form of punishment

17:40: How Cox’s coaches over the years motivated her

23:00: Using positive self-talk and positive affirmations to increase players’ joy of playing and motivation to push themselves

27:09: Why Carli Lloyd and Megan Rapinoe are the two athletes with the greatest work ethic Cox has ever played with

33:09: The greatest barriers and challenges in why players don’t push themselves as much as they should?

40:24: What were the most foundational elements for Cox in taking over at Gig Harbor for her first season and building that program into a state-title team?

45:39: Advice for athletes on how to improve their work ethic and what a great work ethic really looks like

Stephanie Cox: “I remember I was with the U.S. youth national team and they would send us workouts. I really don’t remember ever doing any of those, though, honestly. I think my first pure running workout was preseason my freshman year in college … my mom drove me to Portland in the middle of the night and we were running in a park for about 15 minutes without stopping. I was like, ‘OK, I was able to do that. I can do this.’ And then I came to the realization that that was just our warmup, and I was in for it!”

“Now being a professional, realizing the parts that feel like work, like lifting for an hour after an intense practice, you have to know and believe that those moments you are putting in, the grind, those things are going to pay off, they’re going to help you finish strong, finish a game and be the best teammate you can be.”

“One of my goals (coaching at Gig Harbor) was I didn’t want them to be scarred for life to work out. I wanted them to feel like it wasn’t an intimidating thing and they didn’t have to have a negative impression in their minds about running. Those of us who play team sports, we’re chasing a ball or something else. We’re not just running for the pure joy of running. But especially at the pro level and even in high school and college there is time to just run because we need to get fitness in. But we don’t want to make it a punishment so that it becomes negative. These athletes move on and get older and then what are they doing to stay healthy? Do they want to go run? Well, no, because it was punishment growing up … fitness should just feel like a natural part of the course of a week.”

“Early on, I would say almost unfortunately, I was able to get by on my talent and ability for so long. I remember my U19 coach had a sports psychologist video me. Just me. During a training session. I think now as a coach I can see what he was trying to get out of me. But I think it just totally flew over my head at the time. I was like, ‘What does he want? I’m doing everything he’s asking of me.’ But he probably knew there was a little more inside of me.”

“I think the motivation that was most impactful to me was experiencing adversity. I got cut multiple times from the U.S. team and finally in 2012 for the Olympic team … I met with Coach Randy Hanson, who I knew and really respected. We talked about me coming back and playing. Even though I got cut I was confident with where I was but I wanted to be honest with the things that really got me cut. One of those things was the beep test (a soccer conditioning test). We sat and … I remember he said, ‘Well you’re a hard worker.’ It just shook me. Like, ‘I am? You’re right – I am.’”

“That was very transformational for me to think of my identity as a hard worker. Then when I stepped on that beep test, I trained it, and I would tell myself, ‘I’m a hard worker. I can do this.’ Rather than, ‘Oh, I’m tired, my legs hurt, this is terrible, I can’t do this anymore, I have to stop.’ It was, ‘No, I can push through pain.’ It was a real belief in myself that I could do it and push through those things. I came back after my daughter was born, she was born in April and in January I was the last defender running in the beep test.”

“We had an intersquad scrimmage at the end of the week recently and I just wrote all these positive affirmations, for myself, in my soccer journal, my former coaching journal and now my playing journal, to focus on all these positives instead of the excuses we can have as players. This field isn’t ideal. We didn’t have as long of a preseason as I would have liked. Or this team is different. This injury I’m feeling. Instead, focusing on all the positive things: I love being out here, I love being able to play against another team, I’m strong, I’m fit, I’m healthy, I’m a hard worker. I really think that during the middle of a game when you’re tired you reflect on those things. Those short, positive affirmations can really make a difference.”

“Carli Lloyd and Megan Rapinoe, they probably had fixed mindsets at some point in their careers about something. They weren’t always the hardest working. Carli will tell you that in her early 20s a hard worker. She just relied on her abilities and when she really started working that’s when she had breakthroughs. Even for Megan, I remember she would never have her heart rate monitored, she wouldn’t send in information about her workouts, and now no one has to tell her what she has to do. She knows what she needs to do and she’s ready to go … sometimes you almost have to overcome skill to determine if you really want it. How much do you really want to be at your best and be at that level? It takes a lot of hard work to get there and almost even more work to stay there.”

“We had a player (the year Gig Harbor won state), our captain, our center mid who did everything for us, she tore her ACL in the quarterfinal game. Player had to move around and step up. I remember we had a meeting after she got injured and I said, ‘Hannah, are you OK with me talking about you in this meeting because I know she doesn’t like attention.’ She said, ‘Yeah, whatever is best for the team.’ So I talked about Hannah and the legacy she had left and how everyone needed to step up to fill in the gap for her. Sure enough, players did. They played unbelievable. Players who I didn’t know how to motivate were suddenly playing extremely well. A player who I had struggled coaching played so well the semifinal and final game. Lights out. I think both games we were down a goal but came back and found a way to win. So go find your why.”

“I think to motivate players you have to get to know your players, first. Get to know them, know them off the field, know their personality and what makes them tick. You have to develop trust and it takes time.”

“One of the things (when I first took over at Gig Harbor) I got feedback from them and their experiences prior. I wanted to hear what they had been through, the things they liked and the things they didn’t like. I wanted it to be collaborative. I didn’t want it to be like I was coming in and taking everything away — this is what we’re doing. I think over time I came to realize the Fall Homecoming is really important. Or Fishbowl. All these things that matter to them, over time I realized that they should also matter to me because these are important to them. Matching these goals that they cared about I think I grew as a coach because of that.”

“Players should be honest with themselves, ask themselves what they are doing in high school and how that will be only magnified and mulitplied in college. The intensity and the amount of time and commitment – being a student-athlete in college is almost a job. Am I about this? Is this the experience I want to have? And if you do, and you’re passionate about it, go for it with all you have. Surround yourself with people who will challenge you and humble yourself to get feedback so you’re ready for it when you get to college.”