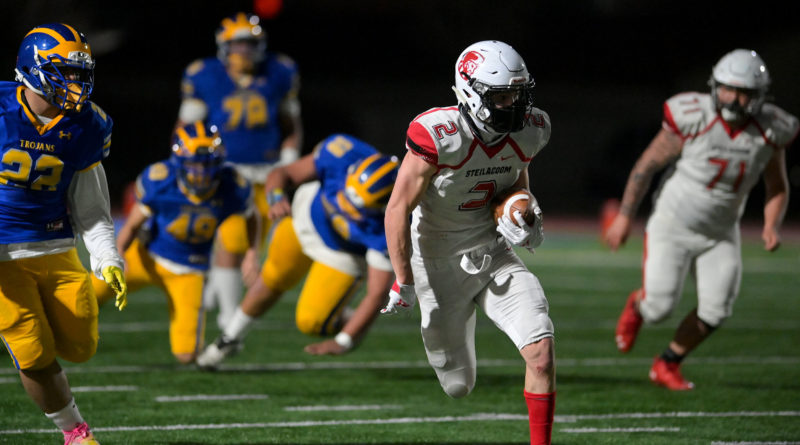 Blue chip recruits Emeka Egbuka (Ohio State via Steilacoom) and Julien Simon (USC via Lincoln of Tacoma) may have enrolled early, but the state of Washington is still loaded across all classifications with a deep pool of receiving talent on display for the pandemic-shortened spring season.

We’re taking a position-by-position look at some of the most impactful players in Washington high school football this season. Our next list focuses on the best wide receivers in the state.

Big-play threat whenever he touched the ball. Caught eight touchdowns and demanded the defense’s respect.

The Arizona State-bound pass-catcher emerged as a freshman and developed into a physical target with soft hands — and Sam Huard’s top target in a receiving corps filled with future Pac-12 wideouts.

Long-strided wideout established himself among the state’s top targets, catching 34 passes for 553 yards and seven touchdowns in five games.

Whether it’s a short-gain situation, or a deep ball, San Diego-bound Bowen — a two-way standout — is strong, fast and as reliable as they come.

After Emeka Egbuka early-enrolled at Ohio State, Central Washington-bound Brady took center stage and led the state in receiving with 929 yards and 14 touchdowns.

First, he helped Royal win a 1A state title, earning first team all-state honors along the way. In his senior season, Christensen, a weightlifting workhorse with soft hands, helped the Knights sweep a schedule entirely comprised with big schools.

He emerged as Daniel Buxton’s top target as a sophomore, turning 12 catches into 300 yards and four touchdowns in four games as a sophomore. And he might be a better lock-down corner, wielding an Arizona State offer.

Want to know how invaluable he is? The lightning-fast Eastern Washington-bound receiver somehow still made an impact on offense despite playing the spring season with a broken wrist.

First team all-SPSL pick emerged as the Vikings top target, led the league in receiving yards and flashed speed and sticky hands that will turn heads at the next level, if they haven’t already.

He’s a Georgetown-bound proven playmaker with great footwork and solid hands who garnered first team all-MCC honors as a junior and picked up right where he left off. “Our success this season was because of his leadership,” Bombers coach Mike Neidhold said.

After being named to the first team all-CWAC on both sides of the ball as a sophomore, the big-bodied wideout caught eight touchdown passes (10 total TDs) and 400 yards in five games as a junior — six of those touchdowns coming in one game, a school record.

There’s a reason Pac-12 schools are vying for his talents: speed, footwork, great hands and length demand the attention of any defense.

He moved from quarterback out wide after a season-ending collarbone injury, and even questioned if he’d play again. Then the preseason all-state wideout packed on more muscle and became the top receiver on a traditional 2A power, and QB Kaiden Rivera’s favorite target in a breakout season.

Air Force signee battled some injuries this spring, but remained a key component of one of the state’s most prolific passing offenses.

First team 4A Wesco all-league selection as a junior returned as one the Wesco’s top playmakers as a senior, turning 18 catches into 303 yards and four touchdowns in five games. A three-year captain, Lane is every bit the leader he is playmaker. He used to spend lunches at school in the locker room practicing halftime speeches.

Set an 8-man record with 381 yards and two touchdowns in one game and finished with 885 yards and 12 receiving TDs on the year. He’s the younger brother of all-time 8-man great John Lesser (9,018 career rushing yards), and described his dominant season as “like playing a video game.”

His junior campaign showed exactly why he’s a national recruit with offers from every Pac-12 school and a host of powerhouses. Caught for 300 yards and five touchdowns in four games, and his blistering speed shined brightest on the rare occasion opponents would send kickoffs his way.

Dynamic playmaker has great lateral speed and has been featured in the backfield for Garfield, though he projects best at the slot as he prepares to walk on at Washington State. He’s the son of former UW standout and NFL player Leon Neal Sr.

Big target out wide transferred from Hazen, led league in catches and served as Jackson Proctor’s top target in an offense that has incorporated much more run in 2021.

His dynamism in space, soft hands and crisp route-running make the converted running back a coverage nightmare. He was breakout QB Gabe Downing’s top target, catching for some 700 yards and earning SSC MVP.

Air Force-bound two-way standout has breakaway speed, can make you miss and is a lead reason why Prep coach Aaron Maul thinks his skill position players are among the most talented he’s ever coached.

A key cog in the Lancer’s star-studded Air Raid, Shumpert is set to walk on at Washington State.

Wherever you put the sure-handed, slippery junior two-sport star, he’ll make an impact. When he’s not stepping in at QB at leading the team to its two biggest wins in program history, he’s an elusive target in the slot.

Big, physical receiver who is just cracking his potential. Through three games this spring, he’s averaging more than 13 yards per catch with three touchdowns in an up-and-coming program.

Two-way standout brought his track speed to the gridiron. The big-play wideout demanded extra attention from secondaries, finishing a breakout senior season with 414 receiving yards and seven touchdowns to help the Riverhawks three-peat as MCC champs.

Multi-year first team all-Big 9 selection jumps out on special teams and defense, and finished with 469 yards and seven receiving touchdowns.

After missing a good chunk of his junior season with a broken foot, Young returned again as JP Zamora’s top option, turning 24 passes into 331 receiving yards and six touchdowns. And he’ll have his pick of college options in football and basketball.