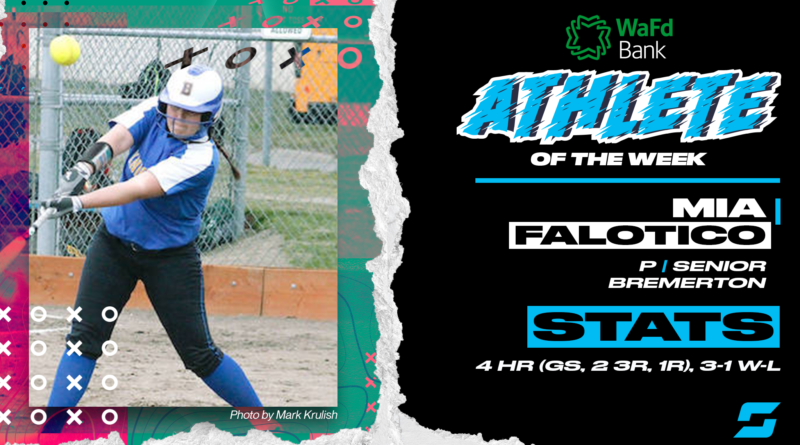 In four games she’s hit a grand slam, 2-3 run home runs and a solo shot. Falotico has pitched every game for the Knights’ 2A program and is 3-1.

Chance McDonald, Steilacoom: Finished 25 of 35 for 396 yards and five total touchdowns in his final game in a win over Fife.

Logan Brady, Steilacoom: The CWU-bound receiver had 15 catches for 190 yards and a touchdown in a win over Fife.

Jake Blair, Camas: OSB-bound signal caller threw for 256 yards and two touchdowns, and added 78 rushing yards and a score in a win over Prairie.

Tanner Beaman, Skyview: The wide receiver led the Storm with three receptions for 97 yards, including a 55-yard TD reception. He also had a 55-yard interception return for a score in a win over Battle Ground.

Caleb Christensen, Royal: The senior quarterback went 26 of 44 for 398 yards and five touchdowns in a win over Moses Lake.

Cooper Christensen, Royal: The senior wide receiver caught 10 passes for 200 yards and three touchdowns in a win over Moses Lake.

Gage Wilson, Moses Lake: The senior caught a 77-yard touchdown as part of his eight-catch, 146-yard day in a loss to Royal.

Jayden Limar, Lake Stevens: The sophomore rushed for 141 yards and four touchdowns, and returned the opening kickoff 98 yards for a score in a win over Glacier Peak.

Ryan Black, Glacier Peak: The senior rushed for a school-record 356 yards on 32 carries and three touchdowns in a loss to Lake Stevens.

Caleb Shawen, Mead: The running back rushed for a game-high 145 yards on 24 carries and a touchdown in a loss to Mount Spokane.

Drew Carter, Lake Stevens: Two interceptions, two tackles for loss and around 90 yards receiving with a touchdown catch in a blockbuster win over Glaicer Peak.