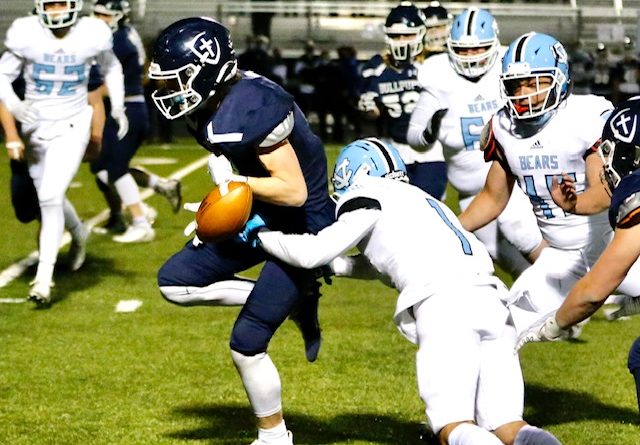 With the victory, Gonzaga Prep went undefeated in league play for the second time in the past three seasons.

“It’s been a goofy season, let’s be honest,” Bullpups coach Dave McKenna said. “We had one game in almost four weeks … so to overcome what we’ve overcome, I am so proud.”

Both teams combined for 942 yards of offense.

Here are four observations from the Gonzaga Prep-Central Valley game:

WITH THE GAME CLOSE, THE BULLPUPS KNEW WHO TO TURN TO

By his own lofty standards, Ryan McKenna wasn’t having a great showing – particularly in the first half (eight carries, 15 yards, fumble; one completion for 33 yards).

And well into the fourth quarter, he was still being held in check with 27 rushing yards.

But after Central Valley trimmed its deficit to 27-19 on Luke Abshire’s 15-yard touchdown strike to Brandon Bruegeman with 9:56 to go, it was time for the junior quarterback to carry the mail.

As an immediate answer to the Bears, McKenna – on third and 3 – went around left end and sprinted by everybody for a 51-yard touchdown scamper at the 8:33 mark.

Abshire was just as quick to respond with his 68-yard touchdown to Josh Lawson to cut it to a one-score game, but McKenna called his own number on six of eight plays on the team’s final scoring series, ending it with his 1-yard touchdown sneak up the middle with 3:55 to go.

“He is tough,” Dave McKenna said of his son. “He runs hard. He is a squirrelly kid (with movement), but strong.”

AS JADEN ORTEGA RIDES OFF, IT IS NOW ROBERT COLLIER’S TIME

Jaden Ortega has been a reliable contributor to this offense – and was the team’s lone returning all-GSL first-teamer from 2019 as a running back.

He rushed for 49 yards and scored twice in his final game Friday. But it also felt like a changing-of-the-guard sequence as well.

Moving forward, expect Collier to be the guy – and somebody who should put up huge rushing totals in the fall as a senior.

The 5-foot-10, 190-pounder was magnificent against Central Valley, rushing for a game-high 149 yards on 13 carries, and catching one pass for 33 yards.

Collier was especially good as the pitch-out runner in the Bullpups’ option game, breaking off six runs of 10 or more yards outside the hashes – including big gainers of 29 and 31 yards.

“Rob is low center of gravity, and squirts out (of a pack),” McKenna said. “And because he is so strong, one on one, he is tough to bring down on the perimeter.”

WITH ONE CASUAL WRIST SNAP, IT IS PRETTY OBVIOUS LUKE ABSHIRE HAS TALENT

In pre-game warmups Friday night, Central Valley coach Ryan Butner noticed the pace of Abshire’s passes – even after a week of nursing a bruised bone in his throwing arm.

“He was zipping a couple of slant routes,” Butner said. “He was slinging it.”

And it led to a career day for the junior.

Abshire completed 26 of 48 passes for 424 yards and three touchdowns in keeping the Bears in it for most of the game.

And Gonzaga Prep did a few different things to try and rattle him – play different soft coverages, but also bringing tons of pressure. And seemingly with a flick of the wrist, Abshire would get out of it – and complete passes to Lawson (five receptions 136 yards, two touchdowns) on the outside, and Bruegeman (eight catches, 132 yards, TD) in the middle of the field.

Not bad for a guy who hasn’t even started a full season of games under center.

“It was, by far, his best game,” Butner said. “He certainly has the potential. He throws such a beautiful long ball, and tonight he seemed to be on with that. He really is talented. And believe it or not, he has so much more room for improvement.”

GONZAGA PREP AN INTRIGUING 4A CONTENDER COME THIS FALL

Yes the spring GSL champions have an entire offensive line to replace, and a couple of key pieces to the back end of their defense – especially Daniel McKeirnan.

But with McKenna back as the signal caller, and the entire starting defensive line returning, the Bullpups are in position to not only repeat as league champions, they could be a big factor in the WIAA playoffs.

“They are so fast and so good at what they do – and super physical,” Butner said.

A welcomed sight over the final few weeks of the season was seeing junior defensive end Kaz Melzer return to the lineup after suffering a serious knee injury last spring.

Melzer and his line mates did get better pressure on Abshire in the second half Friday, sacking him three times. He had one of them.

“After talking to him, the injury happened 91/2 months ago, and he did a lot of research about it on his own,” Dave McKenna said. “But I told him, ‘You have to be all in or … your mind won’t be in it.’ And he was all in.”

McKenna thinks his roster of returners will need to add a little more strength and quickness to maintain its lofty status.

“The GSL will be better next year,” the coach said. “You cannot have a letdown. We have to raise the bar.”