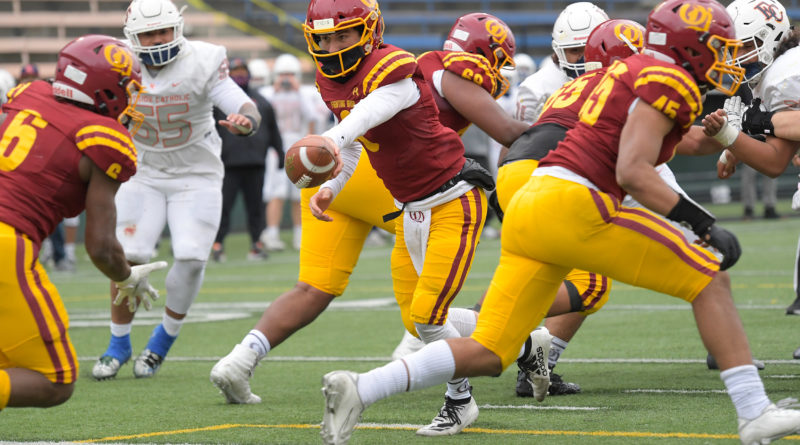 SEATTLE — On Monday, O’Dea freshman running back Jason Brown became the first 2024 player to be offered by the University of Washington, after Nevada and Utah came calling last week at the crescendo of Brown’s breakout freshman season.

He rushed for two touchdowns, including a 50-yard game-sealing burst to lead O’Dea to a 31-14 win over rival and two-time defending 3A state champ Eastside Catholic, the largest point total put on the Crusaders by an in-state opponent since its 2017 season-opener against Gonzaga Prep.

“I’m just more proud of us than anything,” Brown said, “seeing us grow and develop as a team.”

The win Friday afternoon at Memorial Stadium was a full circle moment for an O’Dea team that was shut out 20-0 by the same Crusader group in Sammamish to open the pandemic-shortened season. O’Dea and Eastside Catholic were SBLive’s No. 1 and 2 teams preseason 3A teams in the state, respectively.

And while leagues around the state continue to culminate a season without a traditional statewide playoff, the Fighting Irish have something to play for: a Metro League title game next week against the winner of Seattle Prep and Ballard.

Here are 5 observations from Memorial Stadium:

Even then, it’s rare to see a freshman get so many touches being so new to the program, which is among the reasons Brown wasn’t featured in the Week 1 loss and has been slowly incorporated into the offense this fall.

“We lost our other tailback, so he’s getting more carries now,” Kohler said. “And obviously he’s not your typical freshman. He’s tough, he works hard and I’m proud of him.”

The more reps he gets, the more Brown’s confidence has grown, as well as his comfort level running with his offensive line.

On Friday night, Brown set up the first touchdown of the game in the opening minutes with a run that fell inches short of the goal line, then ran in a 24-yard touchdown with 4:08 left in the first quarter. After Kobe Muasau ran in a one-yard touchdown to bring the Crusaders within 10 with four minutes left, O’Dea recovered the ensuing onside kick attempt. The next play, Brown broke off his 50-yard nail in the coffin.

“He’s a great teammate, he works his ass off, kids love him and obviously he’s blessed with speed and natural ability,” Kohler said. “He doesn’t just sit back, he works hard, and he’s the biggest cheerleader we’ve got. He loves to play, he loves his team. He’s fun to coach.”

Crusaders started third quarter with some life on O

Eastside Catholic came out of halftime and did something it hadn’t done in the first 24 minutes of play: move the ball.

The Crusaders strung together a more than seven minute scoring drive. With 5-star D-lineman JT Tuimoloau out wide, and speedy freshman running back Unterrio Latin-Henley in after sitting out the first half nursing an unspecified injury, Muasau relied on a steady dose of those two, as well as senior wideout/team captain Tavarus George.

Henley powered his way in for a 10-yard touchdown to cap the drive — and put the Crusaders on the board, trailing 17-7.

They appeared poised to leave the first half woes behind them.

Eastside Catholic won the first matchup in the trenches. It controlled chaos at the line of scrimmage.

This time around, turnovers and penalties caused the Crusaders’ offense to sputter, turning the ball over four times — two fumbles and two interceptions.

“That was a big emphasis during the week,” Daste said. “If we can clean those up and take care of the football, we have a chance, right? We didn’t do those things, so it’s hard to be successful and consistent moving the ball.”

To O’Dea’s gain, Kohler stuck with Kohler at QB1

Milton Hopkins Jr. made his 2021 debut in Week 4 after overcoming an academic issue.

He was the team’s quarterback as a junior during the Fighting Irish’s run to the 3A runner-up finish, orchestrating a run-heavy offense with lots of intricacies, misdirections and moving parts. Perhaps his shining moment was helping lead O’Dea to an upset win at nationally ranked Eastside Catholic.

He’s headed to the University of Washington as a walk-on next year, after receiving several Division I offers at defensive positions he’s never played before, but projects well on the defensive line as a 6-5, 220-pound senior with length and raw athleticism.

When he returned, Kohler opted to keep junior quarterback John Kohler (his son), who had started every game so far, under center. Hopkins Jr. was disruptive on the D-line.

“John’s doing a good job, he’s not hurting us in any way,” Monte Kohler said. “We needed Milton on defense against these guys.”

Monte Kohler had a wildcat package with Hopkins Jr. under center in his back pocket if he needed it Friday night. He thought about deploying it in the third quarter, but decided O’Dea didn’t need it after making the stops necessary on defense.

“Trying to go hit someone,” Hopkins Jr. said. “Not a lot of people have the mindset of hitting others.”

One of the many casualties the pandemic wrought on the condensed high school sports calendars in Washington is the doing away of state playoffs. Teams playing league-only schedules have competed for league titles in seasons that last anywhere from four to six weeks, and for perennial playoff programs, it’s been an odd adjustment knowing the exact date the season will end.

The Metro League took a slightly different approach than most of the state, organizing a two-season schedule as opposed to three, giving each season a chance to play a couple extra weeks.

In football that means a four-team mini playoff, which will culminate next week. O’Dea will be there, and Kohler, who helped the state football coaches association advocate state officials for a return to play during the months-long shutdown, is happy his group gets a chance at a league title.

“It’s a great group of kids, seniors have been doing a lot of great things over the years,” Kohler said. “I’m just excited to have this opportunity to play another football game.”