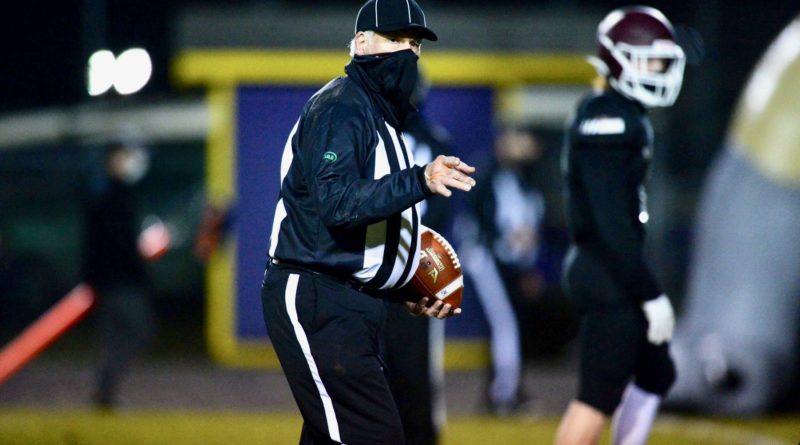 Editor’s note: After retiring from the WIAA, Mike Colbrese joined SBLive Sports and is currently the Senior Vice President of Market Development.

As Mike Colbrese made the farewell rounds as the outgoing Washington Interscholastic Activities Association (WIAA) executive director in 2019, one of his final stops was at the Washington Officials Association (WOA) hall-of-fame induction ceremony.

Humoring a room full of football, basketball, wrestling, baseball and softball referees, Colbrese said now that he was retiring, he’d consider picking up a whistle again.

A few of them laughed.

A year after his 26-year run as the WIAA executive director ended, Colbrese, 71, just finished up his first season as a WOA football umpire in the North Olympic Football Officials Association near where he and his wife, Jan, now live in Port Hadlock.

But that’s not all: Colbrese is also currently an umpire for baseball and softball in the West Sound, and said he plans to officiate basketball later in the spring.

“To me, this was like going full circle,” said Colbrese, who was the country’s longest-serving active executive director at the time of his retirement. “I would not have had 37 years in state associations (in Montana, Wyoming and Washington) … if it was not for officiating.”

Colbrese grew up in small-town Glendive in eastern Montana where his father owned a gas station and was a school-bus driver.

Colbrese was a student at Dawson County High School when he saw an advertisement that the local Catholic-based elementary school in town needed a referee for its basketball game. He decided to give it a try.

“That’s when I realized I wanted to be an official,” he said.

It wasn’t until after graduation in 1968 when Colbrese could join an officials’ association – and did through the mentorship of longtime area referee Tom George, an insurance adjuster next door to his father’s gas station.

“I agreed to referee football, and there was a small group of us in my hometown – 10 or so,” Colbrese said.

Wherever Colbrese went in Montana – whether it was in Glendive (1968-70), or Billings (1972-78) for undergraduate school at Eastern Montana College (now Montana State-Billings), or Missoula (1979-80) for graduate school at the University of Montana, or Lavina, where he began his teaching career – he officiated all sports, including football, basketball, baseball, even boys and girls volleyball.

“Montana played girls basketball in the fall, one of five states to do that at the time,” Colbrese said. “So it was not unusual to go out and work a Friday afternoon football game and stay there to work a girls basketball game later that night.”

Colbrese even saw action at the college level, officiating the likes of NAIA hall-of-famer Bob Petrino Sr. while coaching both of his sons (Bobby, Paul) at Carroll College in football; and Kelvin Sampson, who started his basketball coaching career at Montana Tech before going on to Washington State, Oklahoma and coaching the University of Houston in the Final Four last weekend in Indianapolis.

In all, Colbrese estimates he officiated in 1,500 games over a 15-year span before finally stopping during his years as the executive director of the Wyoming High School Activities Association (1987-93).

And yet, in all those years, he was only given one nickname – by former Montana State men’s basketball coach Mick Durham.

And the guy with the penchant of handing out technical fouls in basketball began thinking about officiating again soon after he retired from the WIAA.

First, he had to get in better physical shape, starting with a knee replacement. He also lost 50 pounds after the surgery.

Then, after seeing that the WOA had lost up to 30 percent of its officials due to the pandemic, Colbrese decided to jump back in this winter.

“He called me and asked, ‘Which (officials’) group should I work for since he was living in the middle between the Peninsula and North Olympic groups – and we pushed him to North Olympic,” said Todd Stordahl, the WOA’s executive director. “He called the assigner right away, got signed up and went and got certified.”

So, Stordahl didn’t have any hesitation recommending a 70-something referee?

“He said he was in good shape,” Stordahl said. “And even though I knew he had not been in the game, or had been watching from the outside for a long time, I knew once he got out there, most of the stuff would come back like it never left.”

Colbrese said he did a lot of “jogging, walking and stretching” leading up to his return to officiating – as an umpire for a junior-varsity game at Sequim High School.

He was assigned seven games for the season, including a final-weekend doubleheader between Cascade Christian and East Jefferson (Chimacum-Port Townsend co-op team) where he was the line judge for both the JV and varsity games.

“When I was a line judge first starting out, you were taught to be no wider than the hash mark,” Colbrese said. “Now, you are running out of bounds … and not as close, but you do have better angles to see outside the play.”

When basketball starts up in a few weeks, Colbrese knows he is in for another new challenge.

“I’ve never done three-man mechanics,” Colbrese said. “But that third guy keeps your experienced officials from not running as much, so I know it is a game-management benefit.”

Colbrese said he’s been a victim of the usual refereeing follies – tripping over his own feet following a play, or being knocked down by a speeding player – but had not been teased, or even recognized by any coach during games.

He is a man who loves sports, and is finding a familiar way to give back to high school athletics.

“It’s been kind of fun,” Colbrese said, “to use some of the rules I helped write.”