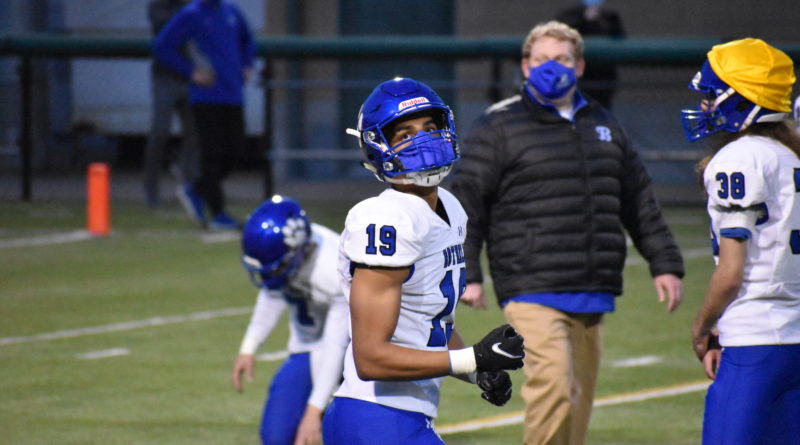 Tom Bainter was sure to make a point to his fifth-ranked Bothell High School football team after its 19-14 victory Friday night over Woodinville to close out the pandemic-impacted season at 4-0, all against 4A KingCo opponents.

“We can say we only played four games, but we played Woodinville twice and a very talented North Creek team. We did everything we could have done in a four-game season.”

After a slow start, the Cougars’ defense scored twice in the fourth quarter – on linebacker Gunnar Genoway’s 72-yard interception return, and on a safety – to break away from the Falcons.

Here are five observations from the Bothell-Woodinville game:

In Week 1, Wayne Maxwell took virtually an entire new cast of varsity starters at Woodinville and played its top 4A KingCo rival – Bothell. The Falcons lost, 32-6 at Pop Keeney Stadium.

They were down 24-0 at halftime. They did not even have a first down. And Bothell was getting big plays on the Falcons’ defense.

But in the rematch, it was Woodinville that controlled the first half – gaining 167 total yards, to Bothell’s 73. And the Falcons also scored the lone touchdown on quarterback Michael Deuster’s 1-yard sneak to end a 13-play, 87-yard scoring drive early in the second quarter.

“The confidence level was the biggest thing from seeing where guys were at in Week 1,” Maxwell said. “There were several things we were not firing efficiently on. The amount of growth we’ve had in the four weeks is tremendous.”

OF COURSE, THE OTHER SIDE IS PRETTY GOOD AT ADAPTING ON THE FLY

Coming into the game, Bainter knew a second meeting against Woodinville would be more challenging.

It wasn’t just facing a fired-up opponent ready to make amends – the Cougars had to adjust to a mid-week issue at practice.

For the first time in his career, Bainter rotated three players – fullback Simon Ransom, wide receiver Cody Petrin and Genoway, primarily a linebacker – in for first-time carries at tailback against a formidable Woodinville defensive front.

Ransom led the trio with 49 yards on 15 carries, tying the game at 7-7 on his 1-yard touchdown run midway through the third quarter. Genoway chipped in with 19 yards on eight carries. And Petrin had the longest run of 26 yards.

“We’ve always been a program, the next man steps up and always is ready,” Genoway said. “We had to do some rearranging. We all figured it out and came together.”

SPEAKING OF GENOWAY, THE BIGGEST PLAY CAME UNDER HIS WATCH

Running back wasn’t the only position that needed readjustment in a short amount of time. The Cougars lost both of their inside linebackers early this spring as well.

That left defensive coordinator Jason Rimkus to reshuflle the lineup. One of those moves was shifting Genoway inside.

But early in the fourth quarter, Genoway was in a familiar area – in the flat – as Woodinville dialed up a third-down pass from the Cougars’ 30.

Under pressure, Deuster tried hitting running back Henry Nichols in the flat that Genoway saw the entire way.

“We work on that running back wheel (route) every day at practice,” Genoway said. “I saw it coming, flipped my hips and ran, and let it go.”

He returned the interception down the left sideline 72 yards untouched for his first career pick-six. Bothell went up 14-7 with 10 minutes remaining.

“It’s definitely been an interesting year – but fun,” Genoway said.

BOTHELL’S DEFENSE TOOK OVER THE GAME FROM THEN ON

Except for giving up a late touchdown with less than a minute remaining, the Cougars’ defense was simply unflappable in the second half.

Bothell held Woodinville to 112 total yards after halftime (69 coming on a final drive). The pass rushed got to Deuster on a number of occasions, sacking him twice, including one for a safety in the end zone with 2:39 remaining. And the Cougars recorded two second-half interceptions by Genoway and Kyree Percival on back-to-back series.

“Our defensive line is fast and physical. Gabe Johnson is tough, and I would hate to have to go against him,” Bainter said. “We are pretty young, but our defense did great thing … and has played like this all four games.”

IT WASN’T PRETTY, BUT BOTHELL’S ANDREW SIRMON WENT OUT WITH A WIN

A career-ending game against Woodinville isn’t usually an invitation for gaudy statistics – and Bothell’s Andrew Sirmon certainly had to grind out a victory for his team.

In fact, his final impact play was recovering an onside kick in the final seconds to preserve the Cougars’ fourth consecutive win over Woodinville – the longest winning streak in the series in more than a decade.

“I told myself, ‘I’ve got to get this (onside kick), and put the game away for the team, and for the seniors out here,'” Sirmon said. “It’s been a tough year.”

Sirmon finished complete just five of 12 passes for 80 yards, but had a 41-yard completion to Jimmy Tucker with four minutes remaining. He also rushed 11 times for 37 yards.

“They (the Falcons) are a great team – and this has always been a great rivalry,” Sirmon said. “It’s always such a fun game. I respect them a lot. It is just fun to end on a win, especially against that team.”