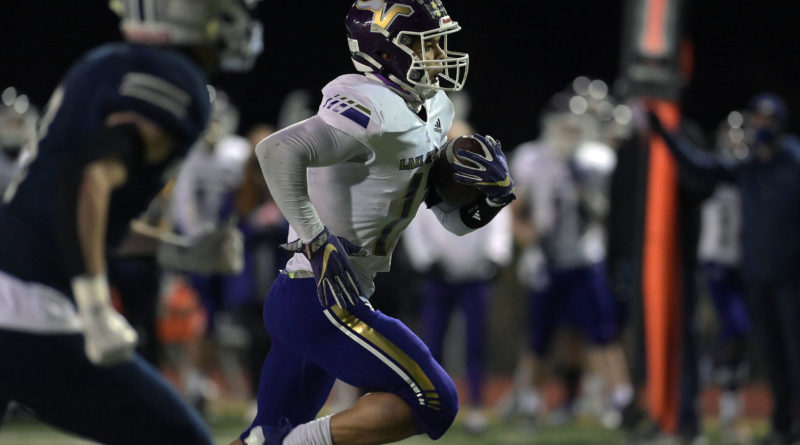 SNOHOMISH – In a WIAA football season with no postseason, Lake Stevens High School football coach Tom Tri made sure to play up at least one week like it was the do-or-die playoffs.

And it was this week as two heavy-hitter unbeaten 4A Wesco squads finally met on the last day of the season.

When it was over, order was restored – again – as the fifth-ranked Vikings pulled away for a 63-35 victory over host Glacier Peak at Veterans Memorial Stadium.

Offense reigned supreme Thursday night – the two teams combined for 1,019 yards and 14 touchdowns. But the Lake Stevens defense did just enough, picking off Glacier Peak quarterback Tyson Lang three times, including one for a score. And the Vikings sacked him four times, all in the second half.

With the victory, Lake Stevens extended its winning streak against 4A Wesco opponents to 46 consecutive games, dating back to the 2013 season.

“This was the Wesco championship. In my mind, we are the two best (teams),” Tri said. “That is how we treated it. It was a playoff game for us. This was what the seniors have been waiting for all year.”

Here are five observations from the Lake Stevens-Glacier Peak game:

A few 4A Wesco coaches reached out to Glacier Peak coach Shane Keck this week, wishing him luck in the biggest game of the season.

Against an opponent that has won seven consecutive 4A Wesco champions (which is a lot like facing the New England Patriots of the AFC East).

And even after giving up a 98-kickoff return for a touchdown to Vikings sophomore Jayden Limar to open the game, Glacier Peak scored on its first three drives with ease.

The Grizzlies even rolled the dice on fourth and 2 from their own 12-yard line – and turned it into a Ryan Black 88-yard touchdown sprint down the right sideline at the 4:33 mark of the first quarter.

“The whole first quarter, we made mental mistakes. Calls were wrong – and part of that was on the coaches,” Tri said. “We were just kind of rattled mentally. We didn’t have any flow.”

Lake Stevens was on the ropes … but not for very long.

DREW CARTER CHANGED THE COMPLEXION OF THE GAME IN TWO PLAYS

By now, if you follow Lake Stevens football – you have to know who Drew Carter is.

Carter started in the Class 4A title game as a ninth grader at wide receiver – and has become the team’s top two-way player as a junior.

His recruiting stock is quickly rising, and will likely be one of the top FBS prospects in the state from the 2022 class.

With Glacier Peak up 21-14, the stadium lights suddenly shut off at the 10:09 mark of the second quarter after the Vikings were stopped on third down near midfield.

After a 15-minute delay, the Grizzlies immediately set themselves up for another touchdown after blocking a punt and recovering at the Vikings’ 34.

Black’s 14-yard run got Glacier Peak inside the red zone. But on third down, Lang tried rifling a pass over the middle that Carter tracked the entire way from his “Viking” hybrid position, and he made the interception to halt the threat.

On the first Lake Stevens’ play after the turnover, quarterback Tanner Jellison aired it out down the right sideline to Carter, who made an over-the-shoulder 44-yard catch that set up the game-tying touchdown.

“It gave us momentum,” said Carter, who finished with two interceptions, two tackles for loss and six catches for 86 yards and a go-ahead touchdown.

Limar is well aware many think he is a manufactured product from the 7-vs-7 hype machine.

That thought should all but disappear after Thursday night.

Besides his game-opening kickoff return, Limar scored on touchdown runs of 21, 21, 58 and 18 yards – and finished with a team-high 141 rushing yards on 14 carries in the heaviest workload of his career.

“I wasn’t taking many reps in the first couple of games, so I was happy that I could contribute at the end of the season like this,” Limar said.

“And I am very happy people can finally see it is not just 7-on-7 hype. I can have a future in football.”

Tri will certainly try and help him increase his profile at tailback moving forward.

“He can catch the ball like a receiver. He is very athletic and explosive, and has great vision. He runs hard,” Tri said. “He’s a special player, for sure.”

POUND FOR POUND, RYAN BLACK IS THE BEST FOOTBALL PLAYER IN WASHINGTON

The Grizzles put up a valiant fight for two-and-a-half quarters Thursday night – and Black was the biggest reason why.

He was simply unstoppable.

“Obviously their running back (Limar) is unbelievable, and No. 8 (Carter) is a high-level college recruit,” Keck said. “But I thought Ryan Black was the best player on the field today. And he is the most under-recruited player in the state of Washington.”

Black will be in the conversation for 4A Wesco player of the year – and he does not have a single scholarship offer from a college program, at any level.

It sucks, but I try not to dwell on stuff like that,” Black said. “I hope the right things happen at the right time.

“Hopefully I opened up some eyes tonight.”

COME THIS FALL, THESE TWO SCHOOLS SHOULD BE IN THE MIX – AGAIN

Interestingly enough, the Vikings and Grizzlies have enough young talent at key spots to be not only 4A Wesco championship factors again, but noise-making movers in the state playoffs.

If they can find the right replacements at quarterback.

Jellison’s two-year run as the Lake Stevens is over. He has an offer from San Diego, and will be making a decision on his future in the coming weeks.

Tri said Grayson Murren is next in line, and will be a senior in the fall. He is more of a dual threat, much like 2018 starter Tre’ Long. In fact, Murren played free safety on Thursday, and finished up the game at quarterback.

Long is also finished at Glacier Peak, and will move on to the University of Washington as a preferred walk-on.

“We are chasing those guys (at Lake Stevens) – and we are close,” Keck said. “This was a huge opportunity, and we could have won this game. They just made more plays.”