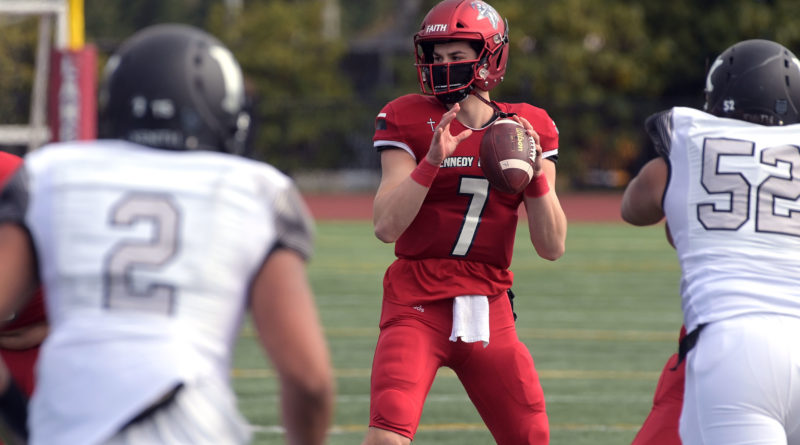 Where does Sam Huard fall among the most accomplished high school quarterbacks Washington state has seen? Could breakout star Logan Dykstra have led Lynden Christian to a 1A title rematch with Caleb Christensen and Royal, who have spent the spring beating up local big schools? And is Gabarri Johnson the top dual-threat star out of the class of 2023?

We’re taking a position-by-position look at some of the most impactful players in Washington high school football this season. Our next list focuses on the best quarterbacks in the state.

After biding his time, Abshire excelled under center as the day-one starter this spring, throwing for 261 yards in the Bears’ debut and flashing the ability to make defenses pay on his feet.

In order to beat Lynden, teams must stop Ayres on the ground. Even crowding the box or spying Ayres wasn’t always enough to slow the powerful runner, who rushed for 586 yards, threw for 536 more and accounted for 13 total touchdowns. Said one opposing coach: “100 percent, our game plan was to stop him.”

Oregon State walk-on pledge rebounded after consecutive season-ending injuries by bulking up and delivering one gutsy multi-dimensional performance after another.

Four-year starter is a strong decision-maker, and is a stabilizing force behind Ballard’s successful run. He threw for 1,981 yards and 11 touchdowns to help the Beavers out to a 9-0 start as a junior, breaking a program record originally set back in 1961.

Lancers leader and workehorse isn’t just strong, but also throws an accurate deep ball and boasts a work ethic his coaches trot out as an example.

Good size and arm strength separate the 6-4, 200 pound Central Washington-bound signal-caller. Threw for 1,480 yards on a 61 percent completion rate as a junior.

The player in charge of Royal’s dominant offense didn’t have anything more to prove after leading the Knights to a 1A state title in 2019, but he affirmed what we knew throttling a regional big-school slate this spring.

His speed and change of direction has been a game-changer for the Tigers, as has his decision-making en route to 1,519 total yards and 22 touchdowns and The Chonicle’s All-Area Offensive MVP honors.

In a breakout senior season, he proved he can beat you through the air or with his feet. What separates him is his ability to extend plays and run through you — even with an entire defensive gameplan geared to stop him.

2B’s most gifted playmaker has the potential to compete at a very high level. Defenses formulate game plans around stopping him — and walk away frustrated.

The last in a line of three Viking quarterback brothers was a second team all-4A SPSL pick as a junior. This spring he stood tall as a team leader behind a strong O-line and threw darts.

The Fighting Irish missed his on-field leadership to open the spring season. His future might be at DL/LB at the next level, but the soon-to-be University of Washington walk-on has a command of the O’Dea offense that has helped bring memorable wins, a 12-1 record in 2019 and a 3A state runner-up finish.

The nation’s top pro-style QB prospect enrolled early at Washington for the spring term, but not before breaking the state’s all-time passing record in just four games.

Perhaps the most productive player north of Seattle and a prolific passer who threw for more than 3,200 yards and 38 touchdowns while completing 75 percent of his throws as a junior and has the Vikings operating at an impressive rate this spring.

Garnered hype and Pac-12 offers before starting a high school game. And he proved why, flashing late-game excellence and a dual-threat capabilities. Threw for more than 1,500 yards and 18 touchdowns in six games.

He can throw — to the tune of 1,012 yards, seven TDS with four picks — and cause problems out of the pocket, even when defenses pay him extra attention.

University of Washington walk-on pledge boasts an impressive arm and a rare calm under pressure, forged through his exploits racing stock cars professionally.

Western Kentucky signee followed up a school record-breaking 3,812 passing yards as a junior by leading the Sentinels to a 5-1 spring season — and throwing darts in the process.

His mastery of his dad’s triple-option offense that he’s studied since he was a team ball boy a special kind of dangerous on the ground, rushing for 225 yards with two long touchdowns in a win this spring.

His senior season was cut short after two games. But the Nevada-bound signal caller was nothing short of terrific in his two seasons under center. The all-state dual-threat QB led a young Mount Si group to the 4A state semifinals as a junior.

Cool, calm, collected signal-caller moved in from Hawaii, won the starting job then a state title. Navy commit can throw it downfield or pull and run.

Dartmouth-bound signal-caller can beat you with his arm as well as his feet. Accounted for 1,495 yards passing, 315 rushing and 21 total touchdowns as a junior.

Two-time league MVP is a terrific two-way player and a matchup nightmare.

After picking up the position on the fly as a junior and earning first team all-league honors, he exploded for the Mustangs as a senior, throwing for more than 300 yards per game on a 60 percent completion rate in his second year as a starter. Coaches expect him to take another step forward as a senior.

What was his encore after leading Bothell to the 4A state championship game? Pack on 20-plus pounds of muscle and lead the Cougars to 4A KingCo title contention.

First team all-Metro pick has been an undeniable leader for a Panthers group that is making waves in the Metro League spring 2021.

Leadership and versatility are words that you’ll often hear coaches use to describe Visperas, an Eastern Washington commit whose arm strength is as impressive as his foot speed.

Montana Western-bound signal caller may be the conductor of the T-Birds’ run-heavy Wing-T, but don’t let that fool you. The 2A EvCo offensive MVP impressed at quarterback showcases, threw for more than 1,000 yards as a junior, and was a part of the 2019 state championship run.

Emerged in a breakout junior season, throwing for just under 1,000 yards with 11 touchdowns opposite one pick for an Eagles team that could have competed for a 4A state title.

Utah commit continues to sharpen a strong set of tools, leading the Riverhawks to a third consecutive MCC title.