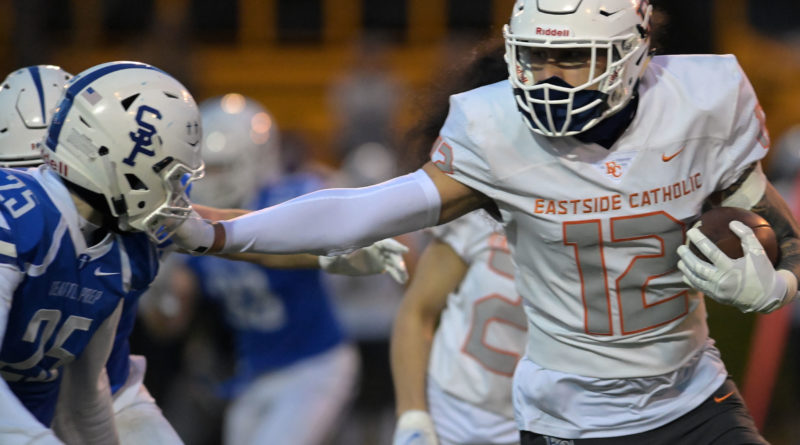 Did recruiters sleep on Kennedy Catholic’s Shane Aleaga? Are Eastside Catholic’s Dishawn Misa, Sumner’s Tristan Dunn and Kentwood’s DeAndre Gill bound for stardom out of the 2022 class? Is Royal’s Derek Bergeson the next small-school standout ready to make it big?

In the past couple of weeks, and moving forward, we’ll be taking a position-by-position look at some of the top players in Washington high school football this season. Our next list focuses on the best linebackers in the state.

When you listen to longtime coach Wiley Allred talk about his small-school defensive standout, you know he has a bright future ahead.

Just when folks began questioning Chiawana’s grip on the Mid-Columbia Conference – the defense, led by this Air Force signee, erased all doubt.

Expectations were that linebacker mate Cameron Brazier would break out, but it was this ex-gymnast who vaulted into prime time in 2A SPSL.

During the offseason, his frame grew and his talent exploded – and he put it all together for the Tides this spring. Now he has an Oregon State offer.

Armed with vast skill and a killer’s mentality, his big-time path isn’t in question. It is what position he will finally settle in after he stops growing.

An All-Amerian rugby player, Farrington emerged this spring as the next reliable playmaker in the Wolves’ long lineage of great linebackers.

Even playing his entire senior season with a club over his injured hand, this Sacramento State signee still stopped ball carriers in their tracks.

This California native is a hulking presence in pads, and certainly looks the part of a big-time player – and recently received an offer from UCLA.

The underclassman-heavy Golden Eagles are loaded with up-and-coming talent – and he is sure to be the school’s next top-notch FBS recruit.

So athletic and versatile, he plays a hybrid (SS/OLB) position in the Lancers’ defense – and the all-3A PCL performer will walk on at WSU.

Have you see the carnage when he collides with ball carriers? Let’s say this sturdy Arizona Christian University signee wins most of those battles.

He wraps up running backs like he does combatants on the wrestling mat – methodically and sure-handedly. No better player in Class 2B ranks.

The two-time 1A Trico player of the year does it all for the Wildcats – and never gets rattled. His next-step position likely will be on defense

He’s been voted as an all-state linebacker and the 3A PCL back of the year. Best position? The UW will find a place for this powerful blue-chipper.

He tore up the 2A Great Northern League at middle linebacker – and is making the same impression in the Greater Spokane League. Montana signee.

Upon arrival, this Inglemoor transfer immediately has given the Wildcats a physical edge at strong-side linebacker; likely Pac-12 preferred walk-on.

It’s almost as if this 4A Greater Spokane League hybrid standout snuffs out a play before the snap – he is the instinctive leader of the Bullpups’ defense.

Another standout wrestler who isn’t the usual beefy size of a mid-level defender, but when all-3A GSL first-teamer wraps you up – it sure feels like it.

This all-3A Metro Leaguer is the total package with size, strength and a bone-rattling disposition – he projects as the state’s next great Power 5 linebacker.

The KingCo’s lone two-way first-team returner? It is this instinctive multi-sport standout, who gets by more with athleticism and instinct than brawn.

How much do the Lancers appreciate this wild-haired heat-seeking missile? He was voted most inspirational teammate while out for year (knee).

The all-Mid Columbia Conference first-teamer might be a little undersized, but he is always around the football – and brings down what he hits.

He’s finally played an injury-free season this spring, and shown how effective a big-framed athlete with nimble feet and instinct can be.

Oh, those swiveling hips! When this all-3A GSHL two-way standout from Vancouver makes a move on you, it usually ends well …. for him.

No, he isn’ the prototypical inside linebacker size-wise. But this all-3A Metro Leaguer closes like a freight train, and hits like a tank.

Whether it’s down at defensive end, or up at outside linebacker, this 2019 3A SSC player of the year (and EWU signee) rushes the passer with oomph.

In the eight-man game, you have to rush the quarterback and cover wide receivers – and this 1B Northwest most valuable player did both proficiently.

If you like both toughness and craziness at inside linebacker, this is your guy – and Waugh was king in a league of fantastic second-level run stoppers.

It seemed like every week this spring, Sumner’s top two-way player (RB) was delivering a highlight-reel play, showing off his skill and athleticism.