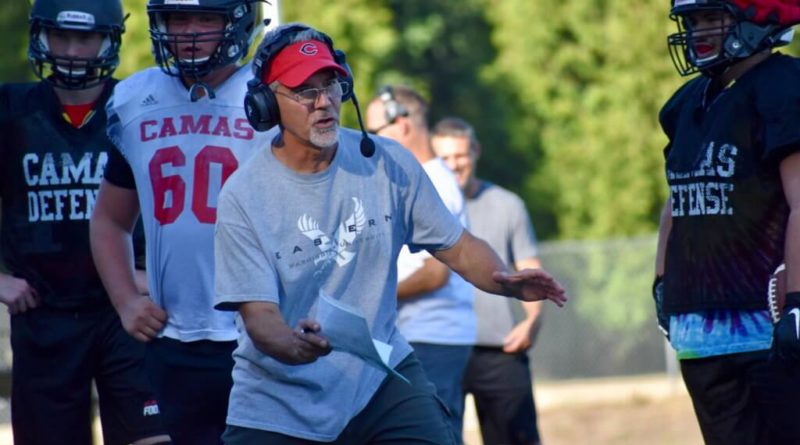 When Jon Eagle took over the Camas High School football program 13 years ago, he said he made a trip to every prospective player’s home, learning about them and asking how they see themselves contributing on the football field.

So when the two-time Class 4A state-championship winning coach, who has reached the state playoffs nine of the past 10 years, talks about player development, that’s where he starts. Eagle says it’s first about building relationships, having staff continuity and getting players to buy-in to the idea that by the time they are seniors they’ll be playing at Doc Harris Stadium.

Eagle spoke about that and more recently on SBLive’s The Preps Lab with TJ Cotterill to discuss his philosophies and strategies on player development since he’s been at Camas. He addressed how he gets buy in for commitment to the weight room, developing leaders, getting players to buy in to getting on the field however possible, even if the position isn’t at their top preference and how he structures offseason development.

Gonzaga Prep boys basketball coach Matty McIntyre joined to talk about building toughness in a program and getting players to buy in to being program- and team-first using his Defining Dozen. He also talks about how Dick and Tony Bennett influenced his Pack Line defense and how he’s continued to have success with it as more programs evolve into “modern” basketball strategies, playing with pace and space.  Statewide coverage of Washington high school sports: https://scorebooklive.com/washington/Follow host TJ Cotterill on Twitter: @TJCotterill  Download the SBLive Sports app on iPhone and Android, your national home for high school sports news and information.

2:29: Most important facets in developing freshmen who first enter the program

5:14: How to cater the youth programs to align with the visions of the high school varsity

9:09: Getting commitment from players and buy-in to focus on long-term development and not short-term gratification

12:14: The importance of weight room work in the Camas program and how to deal with outside training opportunities

13:39: Expectations for players in the offseason months

16:09: Strategies for developing players into leaders

22:54: Importance of staff continuity, having coaches who are teachers and staff experience

26:09: The importance of player development compared to talent in program success

30:09: The most importance elements for coaches taking over a program that develops players, tradition, community and long-term success

“I heard a coach one time say, ‘Show me a guy who wins a youth football championship and I’ll show you a guy who doesn’t play everybody.’ I tell our youth coaches – nobody cares who wins the fourth-grade youth championship if you’re going to make guys quit. That’s not what we want. We want to get these guys to their senior year.”

“You can be a fan, or you can be a coach, player or referee. But you can’t pick two. Pick one. So if you’re the fan and you’re trying to be the coach in the car, that’s not your job.”

“Our coaches used to sit around and talk about two things that are very frustrating to a lot of public-school coaches. One – if you coach in a multi-school district you have an advantage because kids can transfer to and from schools, so you can have a bunch of dudes just roll into your school and you’re better overnight. Or – you are a private school and you get kids who move in and make you better overnight. I said we have to quit worrying about that. Let’s focus on what we do have and make that as strong as we can.”

“I tell the sophomores – your goal is to be a two-year starter. So you want to position yourself behind a senior starter. That position is open next year. Your goal is to try to get that. We never want to have three seniors playing left tackle. We are always trying to make sure we have experience at every position.”

“There are some fathers who want to bulldoze a path for their child. The (quarterback) is a unique position and we lost a kid already this year. So we aren’t immune to that … but I think we’ve earned a reputation that kids will listen and we have kids’ best interest at heart. We want to play as many kids as we can and make contributors everywhere that we can.”

“You want to get kids to commit to you. So one of the things we say as coaches is our job is to notice. You need to see everything. It’s my job to notice that my junior offensive lineman’s grandfather passed away. I need to make a point to reach out to him. I need to ask how you’re doing. Things that aren’t even related to football – I need to notice what’s going on in their lives because I truly care about that.”

“The public sees wins and losses. What they don’t see is when players years from now would invite me to their wedding or email me to go get a cup of coffee or something and connect. That means more to me than any Union victory or anything else. It really does.”

“Coaches are notorious for saying, ‘We need more leadership out here!’ … without telling them what it means or how you go about doing it.”

“We tell our players that the leader or captain exists in the world between coach and player. That means they need to communicate both ways.”

“But we also talk to players not just about sports, but about leading in your family. You’re going to have a family someday and your child and your wife is going to look to you to be a leader. So what does that mean?”

“(In our Zero Hour), we have two aisles and we have a thing we do every day called a Finisher. It’s how we finish each day and it’s a competition between one side of the room and the other. Or you pick offense or defense and we go at each other. It’s a great bonding thing because you’re forced to – everybody is counting on you to do the right thing. So you see that your performance matters to everybody and we do it every single day. We make it fun and it’s competitive. I told our coaches, ‘We don’t need team building. It’s happening here every day.’”

“Staff continuity – I think you get that when you let people coach. You don’t micromanage them. You say, ‘I’m going to tell you what I think, and then you go ahead and do what you want to do.’”

During our Sunday meetings during the season we have a thing called Blind Spots. It’s everybody’s opportunity to point out something that is a problem for them. I always start the meeting by saying is there anything I need to be doing to help you do your job better? Am I missing something? And somebody might say, ‘Johnson is starting at safety, why isn’t he getting reps at receiver? Nelson carried the ball four times, why isn’t he getting more?’ So this gives everybody a chance to air their concerns and once that meeting is over we let it go.”

“What hurts staff continuity is what I call Parking Lot Conversations. Everybody after the meeting leaves but you have two guys standing in the parking lot upset about something when it should have been brought up in the meeting … but I think we have a really good group of guys who are tight and fit together really well and I think our players see it and they feed off of it.”

“We always believed that if you have everyone in the school who can contribute to your team playing, then you’re going to win.”

“When I was a young coach and my wife worked evenings, I recruited our own players. I went to their houses and I sat down and listened to them talk about themselves and how they see themselves playing football. So I think you have to start by developing relationships with people. If it’s good, then the numbers will grow. The relationship piece is very important.”

“Successful people evaluate themselves first. Unsuccessful people evaluate everyone but themselves. I’ve always held on to that. I’m haunted and I’m in great fear or losing a game. So I will go to the ends of the Earth, I don’t care who the opponent is, I will do my best to prepare our team. I think I’m obsessed that way. And I think that filters down to all our coaches and players – we want to leave no stone unturned in our preparation. And I tell players that I hope they take this with them in their relationships and whatever profession they pursue.”