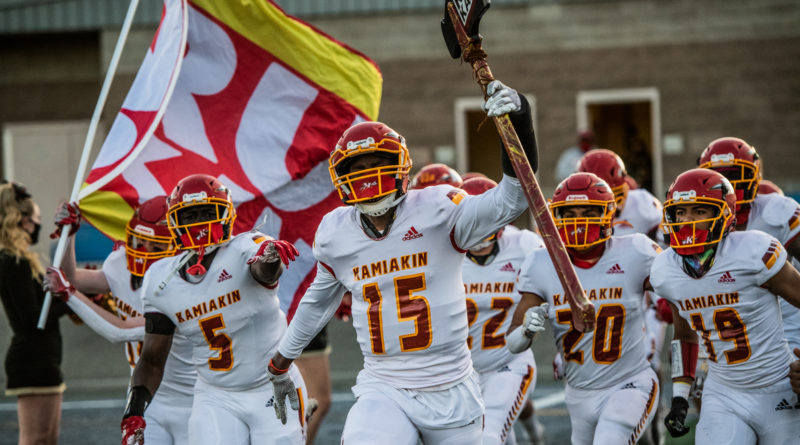 Scott Biglin looked at his 14 seniors on Tuesday night and delivered a pointed pregame message.

“This is our state championship,” Kamiakin’s head coach said. “Win or lose, this is it.”

They didn’t need any more prodding.

Eastern Washington-bound Tuna Altahir busted loose for a 50-yard go-ahead touchdown run with 2:40 left and the Braves stopped a gutsy game-winning two-point conversion attempt to hold on and beat Kennewick 20-19 at Lampson Field in the last game of the shortened spring 2021 football season — all on the same night Chiawana wrapped up its third straight Mid-Columbia Conference title with a win over Richland.

In the first year of its move up to 4A, Kamiakin ended on a high note and asserted itself over a Kennewick team that played in the 3A state semifinals in 2019. And it rebounded from a barn-burning 15-14 Week 3 loss to undefeated Chiawana to finish its season strong.

The 3 Kamiakin defensive plays that changed the game

Kennewick’s offense got out to a commanding start, building a 6:45 minute scoring drive to go up 7-0.

Eastern Washington commit Messiah Jones stepped back off the line, picked off Elijah Tanner and ran it back 88 yards to put Kamiakin on the board.

“The game, in my opinion, flipped on the pick-six,” Kennewick coach Randy Affholter said. “If we go and score there, it’s a different game.”

In Kamiakin’s loss to Chiawana on March 12, the Braves had a pick-six called back due to a block in the back. They were determined to not repeat the same mistake.

“They had our number in that first quarter, we just started slow,” Biglin said. “Had them backed up third down three or four times and we just let them out of the pocket. Credit to our guys for hanging tough after that first drive, digging their feet in the ground and not letting anything else happen.”

On Kennewick’s next drive, sophomore corner Gabe Tahir picked off Tanner again. The second most consequential play came with around four minutes left in the second quarter. Payton Graham picked Tanner off to put the Braves inside the red zone, setting up a 15-yard pass from Henry Mercado to Jones two plays later.

Jones rose up and bodied a defensive back to snag the jump ball. The play was designed to go to fellow Eastern Washington commit Woodley Downard (who played with a wrapped broken hand), but he had defenders draped on him.

“It’s finally what we were hoping (Messiah) would do,” Biglin said. “He was playing not up to par the first couple games, then the last two or three games he stepped it up. (Henry Mercado) rolled around put a ball up for Messiah to go be Messiah, and he certainly did that. He’s gotten better and better and his upside is just tremendous.”

Lastly, Kennewick scored to pull within one with 1:45 left. Affholter called a two-point conversion. Tanner was flushed out of the pocket by two defenders and his end zone heave fell short. Kamiakin held on.

“It’s the end of the season, he’s trying to go to the win,” Biglin said. “I respect that call. I don’t know if I would have had the guts to do it.”

So, did Affholter flinch telling his offense to stay on the field and go for the win?

When in need of a short gain, Myles Mayovsky is as much of a sure-fire bet to earn it as there is across this state.

This season, he’s doing it with a club arm. As SWX reporter Jamie Council called him on the live broadcast, the all-state junior running back was the “one-armed bandit” for the Lions who took around 23 carries.

Tuesday was his second game with the club after breaking his game the season-opener. He missed the last two weeks with a sprained ankle.

Mayovsky’s injury is only the tip of the iceberg for a Kennewick team hobbled by injuries. Down to its third string inside linebacker. Saddled by five separate knee injuries — three ACL tears, two meniscuses.

“You don’t realize how many injuries we’ve had this spring,” Affholter said.

Both sides appreciative of a season

It feels trite to write that both sides were happy to be there at Lampson Stadium on Tuesday night, ending their respective seasons in a matchup containing top-10 teams in each classification.

But in a school year where the fall season was postponed as a result of the pandemic, and for months, MCC teams practiced with the real possibility that a season might not take place.

Neither team had a game canceled or had its program put on pause mid-season. Both completed its schedule, finishing 5-1. By those standards, the season even taking place was a win.

Said Affholter: “We had a chance to play, that’s the way I look at it.”

Kennewick turned in team equipment right after the game. Kamiakin is still planning on commemorating the season as a team in some way. Both teams went home celebrating.

“It’s exactly how you wanted this season to end,” Biglin said.