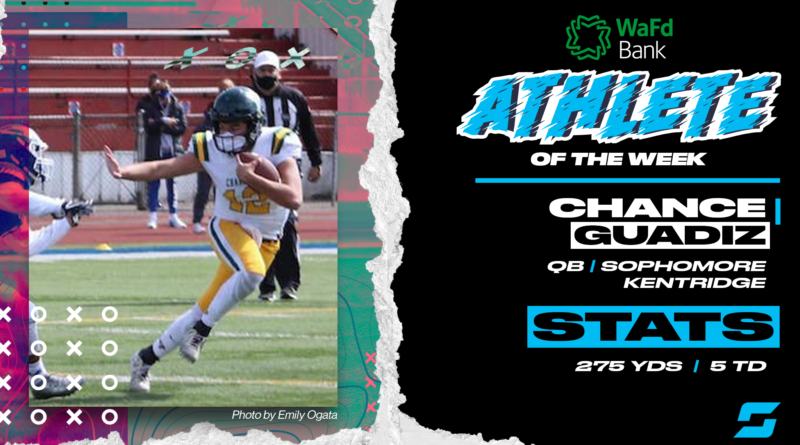 The sophomore had 275 yards and 5 TDs in the first half of the Chargers’ 55-19 win over Kent-Meridian.

Guadiz received 41.38% of the vote, beating out Graham-Kapowsin’s Va’a Hansen who finished second with 29.81%. Seattle Prep’s Braeden Smith finished third with 13.86% and Toppenish’s Jason Grant finished fourth with 8.29%. There were over 52,000 votes tallied this week!

Dylan Carson, Marysville Pilchuck: Finished with 241 yards on the ground and four touchdowns in a 42-19 win over Arlington.

Malik Dotson, Lakewood: Ran for 140 yards and three touchdowns in a lopsided win over Stanwood, reports The Everett Herald.

Michael Purl, Cascade: Ran for 275 yards and three touchdowns in a win over Everett, per The Everett Herald.

Steele Swinton, Edmonds-Woodway: Ran for 137 yards and five touchdowns in a 47-0 win over Shorewood, reports The Everett Herald.

Sam Huard, Kennedy Catholic: In pursuit of the state’s passing record, the UW signee was 30 of 42 for 444 yards and six touchdowns – with more than 400 of that total in the first half in a win at Decatur.

Junior Alexander, Kennedy Catholic: The ASU signee caught five passes for 137 yards and three touchdowns in a win over Decatur.

Va’a Hansen, Graham-Kapowsin: The senior rushed for a career-high 205 yards, had 65 receiving yards and totaled five touchdowns including one on an interception return in a win over Peninsula.

Braeden Smith, Seattle Prep: Filling in for injured Jake Sype at quarterback, he led the Panthers on the decisive 50-yard drive with a minute to go that shocked O’Dea, giving the school its first win over the Irish since 1980.

Gabarri Johnson, Lincoln: The sophomore quarterback completed 20 of 28 passes for 251 yards, rushed for 53 yards, threw for the tying touchdown with 38 seconds to go, and ran in the game-winning two-point conversion in a 22-21 win over Lakes.

Nic Bond, Eatonville: The senior rushed for 130 yards and two touchdowns (on just three carries), and recovered a blocked punt in the end zone in a win over Franklin Pierce.

Jason Grant, Toppenish: The junior wideout scored a school record six touchdowns — four receiving, one on the ground and another a 95-yard interception return — in a 63-6 win over Wapato, reports The Yakima Herald-Republic.