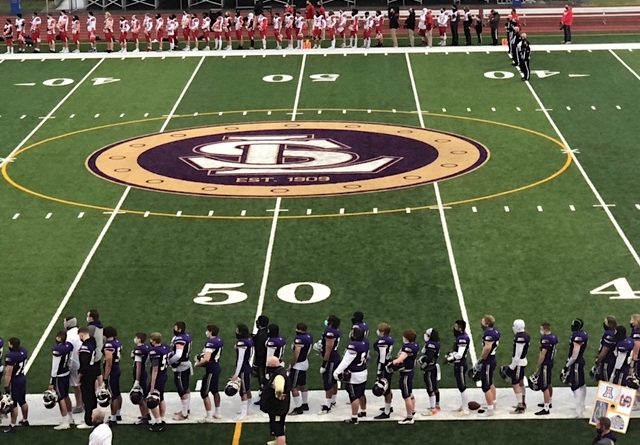 LAKE STEVENS – In their final home game of the shortened 2020-21 season, the Lake Stevens Vikings sent their seniors out on a high note with a 43-36 win over Marysville Pilchuck in a Wesco 3A/4A crossover game.

Lake Stevens controlled the first half and led 29-14 at halftime, but the Tomahawks made a second half run, scoring 15 unanswered points to tie the game at 29-29 in the fourth quarter. The Vikings responded with back-to-back touchdowns to finish off the Tomahawks.

“(It was) a chance for our seniors to say that they won their last game on our field,” Lake Stevens head coach Tom Tri said. “And they did it against a good football team. That’s a lifelong memory they’ll have. That was very important for us to come out and find a way to get a “W” tonight.”

TRAYCE HANKS MAKES PLAY OF THE SEASON FOR VIKINGS

After the Tomahawks scored the first 15 points of the second half to tie the game at 29-29, the Vikings didn’t take long to respond. Junior Trayce Hanks took the ensuing Marysville Pilchuck kickoff 95 yards for a touchdown to give the Vikings a 36-29 lead, and they never trailed again.

“I was just thinking it was a big turnaround that we needed,” Hanks said. “I just knew I was going to take it back. I was like, ‘It’s tied up, it’s time to go. It’s your time right now. I just needed to do that for the team so we could win.”

The momentum, which had belonged to the Vikings for most of the first half had clearly shifted to Marysville Pilchuck until Hanks’ big return.

“I told our kids after the game that that kick return by Trayce was the play of the year in my mind,” Tri said. “It gave us the momentum back. I felt like we were losing by 20 or 30 points, and it was tied at 29-29. We were down on the sideline. We’ve got to do a better job of getting our kids ready to play and responding to adversity. That being said, Trayce Hanks just responded to adversity with a 90-plus yard kick return. But yeah, that was in my mind the play of the year so far.”

If sophomore Jayden Limar wasn’t on the radar of the Vikings’ opponents before Friday’s game, he certainly is now. Limar had 131 rushing yards on eight carries and scored two rushing touchdowns. He also had four catches for 55 yards and a receiving touchdown in the victory.

“He’s a sophomore, but very fast and explosive,” Tri said. “He has good vision and packs a punch when he runs. He’s not going to be a secret much longer, I know that.”

Several times during the game the Vikings needed a big play and more often than not, they turned to Limar.

“I have eyes,” Tri said. “I can see what’s going on. If he’s providing a spark for us, then I’m going to keep trying to find ways to feed him the ball.”

Senior running back Jay Roughton, who scored the Vikings’ first touchdown of the game, injured his knee in the second half and had to be helped off the field. Roughton didn’t return, but he was walking on the sidelines after the injury and was able to be with his team after the game.

Roughton had previously injured the same knee as a sophomore.

After the game, Tri still didn’t know the extent of the injury.

“I don’t know for sure,” Tri said. “The (doctor) did say that he thought it was a sprain and not a tear, so all in all, that is really good news.”

Senior wide receiver and cornerback Gabe Ramsey caught five passes for 46 yards and a touchdown, but perhaps more impressive, Ramsey recorded his fourth interception in as many games this season.

“Gabe has been a stud for us,” Tri said. “He’s a shutdown corner. He’s been a two-and-a-half year starter for us at corner. …Don’t get me wrong, four picks (this season) and he made some great plays of run defense tonight too, but I’m equally impressed with his energy and his spark he provides offensively for us. He gives us one more weapon that teams have to worry about.”

Friday’s victory sets up a matchup of two of the top teams in Wesco 4A next week when the Vikings take on the Glacier Peak Grizzlies. Both teams will enter the game with perfect 4-0 marks this season.

“This is the Wesco championship in our book – 4A anyways,” Tri said. “I know it’s only one game and you can’t really call it that, but that’s the way we look at it. It’s a huge game and a big rivalry. They’re well-coached. It’s going to be an epic battle to finish our season, for sure.”