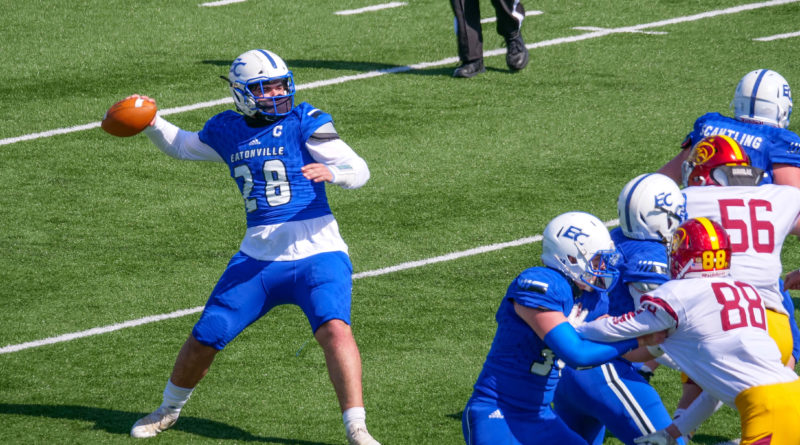 The University of Washington signee threw for 166 yards and four touchdowns, rushed for 112 more and led Eatonville to a 33-21 victory against Enumclaw at Art Crate Field in a 2A SPSL game.

“We wanted to go out with a bang,” Jumper said. “We wanted to come out and make a statement and that is exactly what we did.”

Here are four takeaways from the game.

Jumper does a little bit of everything for the Cruisers and it showed Saturday.

He can pass. He can run. He can play defense. He is a team leader. He even coaches elementary school football on the side.

As he prepares to enroll at the University of Washington on Monday, he wrapped up his career with a statement victory against Enumclaw.

“We are so thankful for his toughness and leadership and character and everything he has brought to our program for four years,” Eatonville head coach Gavin Kralik said. “He is so versatile and has such unselfishness for playing any position we ask of him.”

Jumper dazzled throwing the ball off of play-action, but his best effort was on his team’s penultimate drive when he ran the ball on 11 of the next 13 plays, capping a 13-play, 83-yard drive that took 8:37 off the clock and was completed with a 24-yard touchdown pass to Kralik.

“We were just trying to get on a roll and if it is not broken there is no need to fix it,” Jumper said. “If I’m going to get four or five or sometimes 10 yards a carry, why not keep running it down their throat?”

He drilled into Job Kralik and Justus Roulst’s heads that they need to attack the middle gap and one of them would block a punt.

Nobody was expecting it to happen on the game’s fourth play, however.

Kralik went up the middle and got two hands on Riley Rutledge’s kick knocking it backward. Austin Wicker then scooped it up and ran for a touchdown.

“(Coach) Kramer prepped us all week and said one of us was going to get it,” Kralik said. “I’m just happy we won.”

Enumclaw is known as a run-heavy football team.

The Hornets have plenty of beef on the offensive line and like to give the ball to Royal Snyder and Ricky Bonthuis and try to play “Ground” Chuck Noll football.

On Saturday, though, the Hornets went to the air early and often as senior quarterback Cameron Brauer was 21-for-37 for 196 yards with a touchdown and an interception. He also rushed for 13 yards and two scores.

“He put it in the right spots,” Enumclaw coach Mark Gunderson said. “He had a really good day.”

Brauer’s touchdown pass came on fourth-and-17 from the 38-yard line and got the Hornets on the board. He threw a nice pass to the left where Dylan Watterson hauled it in for a score.

Brauer then scored on an 8-yard scramble with four seconds left in the first half. He added a 1-yard touchdown run in the fourth.

THE END OF A VERY STRANGE SEASON

What does it take to pull off a football season in the middle of a worldwide pandemic? A lot of help and sacrifice.

Eatonville head coach Gavin Kralik credited not only his players, but their parents, the community as a whole, the school and district administration and his coaching staff for making the abbreviated season work out.

“It’s been a crazy year,” he said. “Our kids have been phenomenal. It has been a complete team effort in our community. This is a very special place.”

The Hornets have one more game next week against White River, while Eatonville’s season is over.