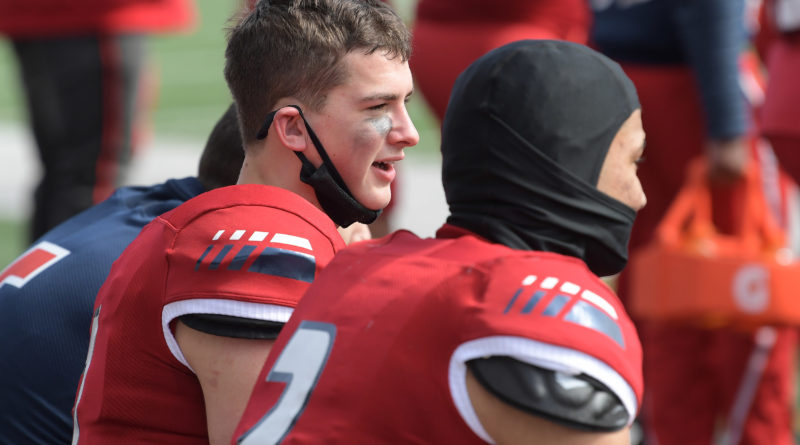 BURIEN – In his final game at Kennedy Catholic, quarterback Sam Huard went out a winner – and a record setter.

Huard threw for 384 yards in the first half, moving past Rypien on the team’s final drive.

With a minute to go, he completed a swing pass to running back Leland Ward along the left sideline that gained 12 yards – and gave Huard the mark at 13,054 yards.

“I wasn’t nervous. I was confident,” Kennedy Catholic coach Sheldon Cross said. “We legitimately think we will throw for 500 yards every time we play. We told ourselves all week – that is what we do, that is how we play and it will all work out.”

Here are five observations from the Kennedy Catholic-Kentwood game:

As easy as it was for Huard and company to move early on, it still appeared that the Lancers would have to wait until the second half to congratulate their record-setting quarterback.

That is, until Jackson Proctor’s pass for Kentwood sailed in the waiting arms of Kennedy Catholic defensive back Isaiah Malloe at the Lancers’ 10 with 77 seconds remaining before halftime.

Suddenly, record watch shifted into overdrive as Huard had the entire field to go – and needing only 30 yards to set the new mark.

The Lancers went to their hurry-up offense, which left school officials scrambling as the UW signee began completing short passes and racking up more yardage.

On the fifth play of the drive, Huard appeared to want to go deep on a pass – and pointed for a wide receiver to make a move that way. Ultimately, he checked it down to Ward for a 12-yard gain to make history.

The plan was for the game to be stopped right then, but the giddy-up Lancers’ offense ran the stoplight. Huard completed another pass, this time to Junior Alexander for 17 yards.

Huard was brought near the Kennedy Catholic sideline for recognition from school president Matthew Mohs – and to hug teammates and Cross.

“It was definitely a great moment,” Huard said.

Seconds later, he threw a 6-yard touchdown to Ward right before halftime to give the Lancers a 34-3 lead.

THERE IS NO DENYING HUARD HAS A SPECIAL BOND WITH JUNIOR ALEXANDER, JABEZ TINAE

You can tell every time Huard is asked a question about himself, he goes through his internal checklist of teammates and coaches to credit as well.

But it is pretty obvious his connection with Jabez Tinae and Alexander is special – and he showed that Saturday.

Alexander finished with 11 receptions for 143 yards, and Tinae had nine catches for a team-high 155 yards. Ward (14 catches, 152 yards, two TDs) was popular, too, against soft Kentwood pass coverage.

“One of the most emotional parts was knowing that I wasn’t going to be able to play with Junior (Alexander) these next four years,” Huard said.

“I have a connection with these guys, and it really showed on the field.

“I have the best receiving corps in the country.”

WHAT WAS KENTWOOD’S APPROACH? KEEP UP AND STAY CLOSE

It was the final time Kentwood coach Mike Bush would have to face THIS Kennedy Catholic offense – one with which he is quite familiar.

And he did not devise any special schemes or wrinkles to try and slow down the Huard-led passing attack, either.

“We were just trying to play football,” Bush said. “They are a great passing team. Our goal was to stay with them, and at the end of the game, be in it.”

In other words, Bush wanted to steal a last-man-standing shootout victory.

The Conquerors really rode first-year starting running back Paula Tapasa, who rushed for a game-high 132 yards on 28 carries, scoring a pair of touchdowns.

But what doomed Kentwood was first-half inefficiency: Twice, the Conquerors were inside the Lancers’ 5, and came away with just a field goal. Proctor threw an interception, and they fumbled a line-drive kickoff that Kennedy Catholic recovered for another turnover.

IN THE HUARD HOUSEHOLD, THE FINAL GAME WAS MORE THAN JUST SETTING RECORDS

Damon Huard had his time – first at Puyallup High School, then a national champion at the UW and two-time Super Bowl winner in the NFL with the New England Patriots.

When it came to looking after his son, Sam – he let the teenager experience things for himself, including dealing with all the hoopla this week surrounding Rypien’s record.

“We really don’t talk about the records,” Damon said. “What is really special is the opportunity to get to play. I didn’t know if I was ever going to get to see him wear the Lancer red again (because of COVID-19), and that was a tough deal for our family. Sam held out hope.”

Damon also watched his son work with the SAW group to try and get a fall season back, and organized team workouts during the quarantine just in case activities started back up – which they did in early February.

“I guess for some people, sports aren’t all that important. In my family … Friday nights meant everything,” Damon said. “To have these moments, I told sam this morning – like Sade, ‘Cherish the Day.'”

NEXT UP AS THE LANCERS’ TRIGGER MAN IS MASON HAYES

After one handoff, Huard was removed from the game Saturday with 4:25 to go – and to a rousing ovation.

On came sophomore Mason Hayes to not only finish out the game, but the season as well (Huard confirmed after the game that he was enrolling at the UW on Monday).

Hayes finished the game by throwing his first varsity touchdown pass – a 6-yarder to Isaac Syph.

Moving forward, Hayes is expected to be the starter under center, and will have Alexander, Tinae and Reed Shumpert in the lineup for the final three games.

I want to just get his confidence up,” Alexander said. “He’s been throwing to us all summer .. and now he’s in the big spot. He’s got some big shoes to fill, and I have faith in him.”

Added Cross: “I am not sure we can trust a quarterback in this offense the way Sam is trusted, but (Hayes) has a little something to him.”