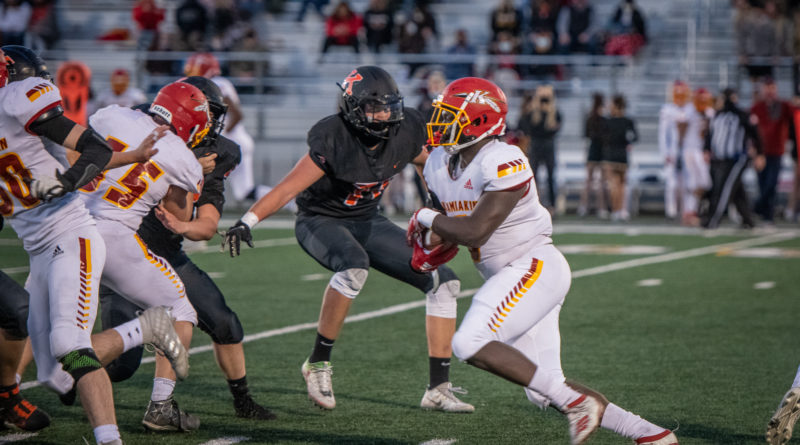 Which power back is the state’s most prolific – Camas’ Jacques Badolato-Birdsell, or Kamiakin’s Eastern Washington-bound Tuna Altahir? Is Eastside Catholic freshman Unterrio Latin-Henley next up? Did your favorite small school feature back make the list?

Over the next week, we’ll be taking a position-by-position look at some of the top players in Washington high school football this season. Our next list focuses on the best running backs in the state.

Runs hard, embraces physicality and is a fitting workhorse back behind North Creek’s stout O-line.

First team all-NSPL pick is a load to bring down. As a junior, he surpassed 1,000 yards and had the Lions off to a strong start in the shortened senior season. He’s rushed for three touchdowns, and even threw a touchdown pass to his younger brother, sophomore Ryder Alfrey.

He’s maybe the most unsung cog in an ever-efficient Wing-T, and he’ll also take a game over when needed — case in point his 201 yards, three touchdowns in a 2A state title rematch against Steilacoom.

The MCC’s most prolific rusher is the reigning league offensive MVP, an Eastern Washington commit can run around you — or through you.

His coaches joke that the shifty Nevada commit’s muscles have muscles. He rushed for more than 200 yards in the 2019 4A state title game, and will miss the 2021 season recovering from a torn ACL.

He’s the type of show-stopping back defenses form an entire game plan around. As a senior, he’s had a four-touchdown game and is posting more than 100 yards per contest.

First team all-EvCo pick as a sophomore receiver has already made himself known as a running back, exploding for 231 yards and four touchdowns in a game this season.

With Black in the backfield, defenses are taking a fateful gamble by not crowding the box.

College of Idaho pledge rushed for nearly 1,000 yards, eight touchdowns as a junior.

Recorded 1,982 yards and a whopping 30 touchdowns as a junior, and kept that pace as a senior. Would-be frontrunner for 1B state player of the year.

He’s emerged as a versatile, physical back who can turn broken plays into first downs in Ferndale’s vaunted Wing-T.

The future of MP’s offense is his. He packed on upward of 30 pounds after a breakout 1,000-yard sophomore campaign.

His breakout season has been helped by what Eric Kurle considers his best O-line ever, but make no mistake, Davenport, who rushed for more than 100 yards in two of his first four games, is here to stay.

After taking turns in a three-back committee as a sophomore, he’s now the feature back. He’s packed on weight and kept his burst, using it to bowl over defenders and follow Puyallup’s imposing front.

Packed on muscle and built speed after moving out from Utah and emerged as one of the most prolific rushers in 2B, garnering league MVP honors after amassing 1,881 yards and 26 touchdowns.

Just when you think you lay into him, he’ll carry you a few extra yards, making him every defense’s nightmare. Recorded eight touchdowns on 7.4 yards per carry this season.

A rare combo of quick-burst speed and raw power, the dynamic runner overcome injuries and worked to fit in a new system.

Had 48-yard TD in first game of season, as a ninth grader, and is the fastest player on the field, no matter the opponent (see for yourself), picking up right where Gio Ursino and Sam Adams II left off. Remember his name, and watch his star shine bright for years to come.

Give him a hole — a glimpse of light — and he’ll make you pay. Sophomore back has already shown he’s capable of the big play. He’ll be a big part of the Vikings’ future.

Bruising downhill runner paced the Lions to the 3A state semifinals in 2019 amid a 1,500-yard sophomore season. The future is even brighter.

Productive as a sophomore, fought through injury to provide a spark to an underdog 4A state semifinal run as a junior. And now, after a final run as a two-way star in the KingCo, Norah will join Washington State as a walk-on.

He’s a power back with some burst, a returning first team all-Greater Spokane League choice and the perfect feature back in Dave McKenna’s triple-option. Rushed for 179 yards on 16 carries in a lopsided win over Mead, for example.

Workhorse back has helped the Rockets contend for a long-evasive Trico League title. Ran for 2,089 yards and 23 touchdowns as a junior, and followed it up with a strong senior campaign.

Good luck bringing him down. Schlenbaker surpassed 2,000 yards, tacking on 27 touchdowns on 9.5 yards per carry as a sophomore. This shortened season? He almost reached the 900 yard mark.

The injury bug zapped most of his junior season. Now he’s making up for it by emerging as hard-nosed runner and the Seahawks’ bellwether.

Went from splitting carries with 1,000-yard rusher Gabe Johnson to becoming a dynamic feature back for the Conqs.

Western Colorado signee rushed 632 yards, 11 touchdowns as a junior in an offense that features the most dominant pass attack in state history, and is not keen on handing the ball off this season.

With 1B player of the year Marcus King gone, the question was could someone assume his role? Wisehaar proved he could, rushing for 918 yards (18.7 yards per carry), and 16 touchdowns in six games for the two-time defending 1B champs.

He’s slippery, physical and boast the ability to jump cut and get downhill that leaves even his own coaches speechless. “None of this is stuff we coach,” Prep coach Aaron Maul said. “We just kind of get out of his way.” Second team all-Metro League choice as a sophomore.