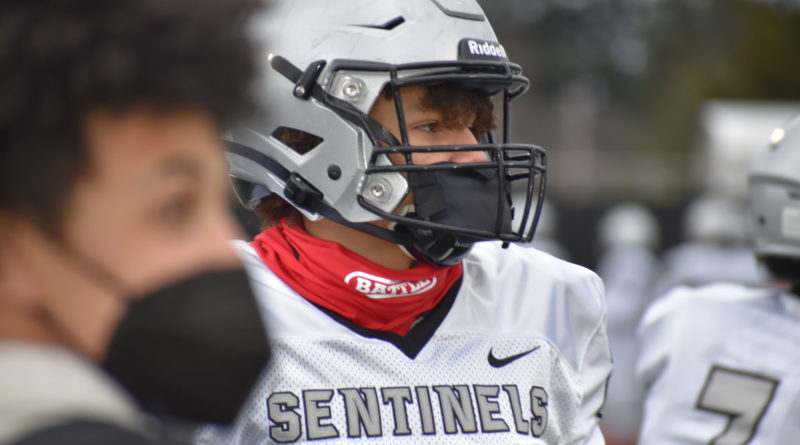 Having already clinched at least a share of its first league football title in 20 seasons, Spanaway Lake could have stood back and admired its accomplishment in this shortened season.

But the Sentinels did not want to share the 3A PCL title with anybody.

Especially the co-favorites that were picked by everybody to win it in the preseason.

Well, the Sentinels don’t have to worry about that anymore. Seventh-ranked Spanaway Lake swept through the league with its 35-7 victory over No. 5 Lakes on Wednesday night at Harry E. Lang Stadium in Lakewood.

It was by nearly that same score – 34-7 – that the Sentinels kicked off their season with a victory at then-No. 3 Lincoln.

Here are five observations from the Spanaway Lake-Lakes game:

For years, Spanaway Lake – commonly abbreviated as “Sway” – has played third fiddle in the Bethel School District in football to Graham-Kapowsin and Bethel, now rivals in the 4A SPSL.

In fact, the last time the Sentinels had a winning season was 2009.

But when longtime coach John Robak abruptly retired early in 2019, his son not only took over, but he began reshaping the program’s culture.

In his first year, the Sentinels made the 3A district playoffs, and finished 4-6.

But this season, every key piece in their talented secondary returned, led by senior Deonte Hayes, junior KeeKee McQueen and rising sophomore Jasiah Wagoner, who stole the show Wednesday night.

And they were able to keep their big guys on both lines healthy, which again showed up against a very physical Lakes team in the season finale.

“A lot of teams have talked down about us,” Wagoner said. “So it feels good to prove everybody wrong that we are one of the best teams in the state, 3A or 4A.”

Again, Wagoner is only a sophomore, and he’s already being mentioned as one of the best recruits in the 2023 class as a cornerback.

Through five games heading into the matchup Wednesday, he was easily the team’s leading wide receiver.

But Robak wanted to play his cards differently against Lakes: Unleashing Wagoner at tailback.

“That was the surprise. We were hanging on to that,” Robak said. “Obviously he is a gifted athlete. … We let him loose.”

After Lakes grabbed an early 7-0 lead, Wagoner scored four unanswered touchdowns of his own, including what proved to be the game-winner on a 7-yard scamper with 53 seconds remaining in the first half that gave the Sentinels a 13-7 lead.

But he saved his best for early second-half viewing. On the first play, he took off let, cut up the middle and wiggled through traffic before darting back left and outracing the entire Lakes defense to the end zone for a 60-yard touchdown run – and 20-7 Spanaway Lake lead.

And after the Sentinels held Lakes out of the end zone from inside the 10-yard line early in the fourth quarter, Wagoner flipped field position by breaking loose on a 76-yard run – setting up his last touchdown on a 5-yard run with 8:23 to go.

Wagoner finished with a career-high 235 rushing yards on 24 carries.

“I was undersized going into high school, so (coaches) thought it was best to use my speed at wide receiver,” Wagoner said. “I am tough enough to play  running back, even though I am 170 pounds.”

UNHERALDED PART OF THIS SPANAWAY LAKE TEAM IS UP FRONT

Hayes, McQueen and Wagoner are the faces of this program because they were the highest-rated college prospects – all projected to land in NCAA Division I programs.

But you don’t outscore six opponents by a 259-14 margin just with flashy athletes.

And linebacker Eugene Camacho, also just a sophomore, cleans everything up as the team’s top tackler.

After the Lancers scored on Leo Pulassi’s 3-yard touchdown run late in the first quarter, they drove into the red zone five other teams after that – and came away with nothing.

“On defense, we mostly just have to trust each other, talk to each other – and adjust,” Sullivan said.

“I have always said the one thing about our team that got slept on was our defensive front.”

Halftime would have had a different feel if the Lancers had cashed in on a promising drive in the final minute, but running back Caleb Kwalalon coughed up the football at the Sentinels’ 18 in the closing seconds.

An untimely 16-yard holding penalty wiped out a fourth-and-4 scramble run by quarterback Justin Brennan – and another Lakes drive stalled at the Sentinels’ 35 midway through the third quarter.

“Part of our game plan was to try and control the clock a little bit, and keep it out of their hands. We knew they had some explosive weapons,” Miller said. “We wanted to try and shorten it and run the ball, and we did.”

Lakes drove from its own 17-yard line all the way to a first-and-goal situation at the Sentinels’ 10.

But after Washington was dropped for a 2-yard loss on second down, Brennan tried hitting wide receiver David Wells in the right back corner of the end zone, but the pass was swiped away by McQueen on third down.

And on fourth and goal, Brennan’s pass to Abel Patu in the middle of the end zone fell incomplete – and Lakes came up empty with 9:45 to go.

A few seconds later, Wagoner had his longest run of the night to set up a Sentinels’ score – and the game was essentially put to bed.

THIS 3A PCL RACE NEXT FALL IS GOING TO BE FUN

Nobody is going to forget what transpired this spring when it comes to figuring out the 3A PCL order of finish next fall.

Lakes and Lincoln always seem to be talked about. Deep postseason runs have a way of sticking with pundits.

But do not forget these Sentinels, because they are also young and talented all over the place – including at quarterback with dual threat Dempsy James, who is a sophomore.

“A lot of those kids are underclassmen,” Miller said. “It is going to be another dogfight next fall.”