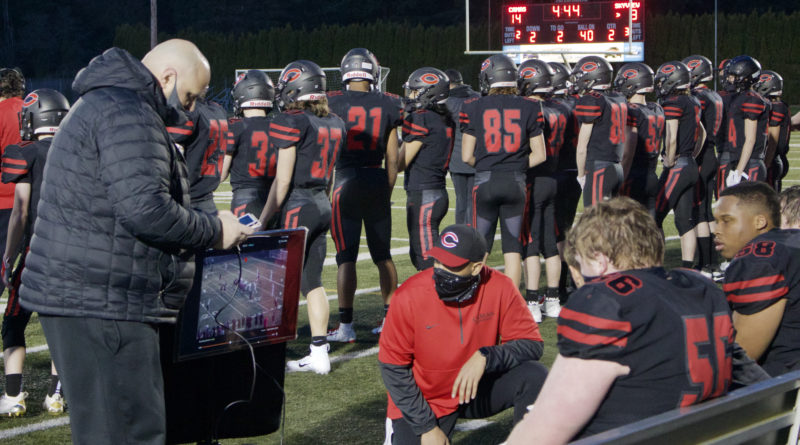 CAMAS — Jake Blair lobbed a dart over the Skyview defense to Bryce Dewey as Camas reclaimed the lead in the fourth quarter. As his team celebrated downfield, Blair turned to face the crowd, lowered his head and let out a series of guttural fist pumps.

Was there any way he’d let his team lose?

“No,” Blair said, matter of factly.

“We were hoping,” Blair said. “That’s all we could do, hope we could continue our season. I think during that time it lit a fire under our team that when we get back, we were going to dominate.”

The Papermakers won a game that featured five lead changes — four in the fourth quarter —in front of its band, cheer squad and a stadium at 25 percent capacity, which made for a significantly improved home atmosphere.

And Camas gave them plenty of reason to celebrate.

Camas’ Matt Gerardo kicked a 31-yard field goal as time expired to force overtime and in double overtime, kept Skyview out of the endzone to clinch the win.

Camas established the run int he first quarter and advanced the ball quickly for its first two touchdowns.

The Papermakers scored less than three minutes into the game on a one-yard run by Jairus Phillips. Gabe Guo punched in a one-yard run with 2:18 left in the first to go up 14-0.

What went from a defensive battle where each team traded three-and-outs, turned into a shootout. Gabe Martin scored on a one-yard run midway through the third quarter.

The game really opened up when Skyview ran a double pass — a Clark Coleman screen pass to Xavier Owens, back to Coleman for a 34-yard gain. The play set up Owens’ 40-yard touchdown that gave Skyview the first lead with four minutes left in the fourth quarter.

Camas had an answer for every outburst.

“We just got back in the groove,” Blair said. “Something clicked.”

For Jake Blair, the win was years in the making

There’s just something about Skyview.

In 2018, Blair was a first-year quarterback for an up-and-down Papermakers team. Eagle ran two quarterbacks, Blair and Andrew Boyle (the latter now a kicker at Washington State). Blair suffered a season-ending injury against Skyview.

A season later, he broke his collarbone in a narrow win over Skyview, sidelining him for the remainder of the Papermakers’ 4A state title run. Two seasons, two season-ending injuries, both occurring against the same opponent.

Consider Blair’s 2021 run, and his heroics Tuesday, as his one-man revenge tour.

He converted three fourth downs — two of them 4th and 10 — in the fourth quarter and overtime, and had an answer every time Skyview reclaimed the lead.

“Time and again, the common denominator is Jake Blair making a big time play when we absolutely had to have it,” Eagle said.

Blair, who will walk on at Oregon State, emphasized to his team throughout the game the importance of staying sharp, and not letting up.

“Us seniors, this is our last season of high school football ever, so we wanted to come out on top,” he said. “Tonight we did that, and told our guys don’t quit, they’re too good of a team, if we let down they’re going to come back.”

in position to clear the way for a league title, the pinnacle accomplishment in a season with no traditional postseason.

A win Tuesday night would have vaulted Skyview atop the combined 3A/4A Greater St. Helens League standings with two games left for the first time in years. Recently, the Camas and Union have traded league titles when the league was just 4A. And those league titles have set up 4A state title runs — Union in 2018 and Camas in 2019.

Skyview has been a close second or third the last few seasons.

Even in defeat, leaders on this year’s team saw positive in the Storm’s ability to keep fighting back on Tuesday night — from the 14-0 deficit early, to the constant lead changes, to the overtime theatrics.

“I’m proud of everyone on my team who fought hard,” Skyview senior Xavier Owens said. “Usually in the past, older senior teams would have just folded, but our sophomore and juniors helped us climb back, so props to them.”

Owens caught two go-ahead touchdowns in the fourth quarter (from 40 and 19 yards) that both could have been game-winners.

His takeaway from the back-and-forth loss?

“Just got to keep working,” Owens, who is signed with Western Oregon, said. “Work more. Hopefully the younger guys see this and use it as fuel, so they keep working as hard as they are.”

Union has a win over Camas, Camas beat Skyview and Skyview beat Union, meaning the three teams will likely finish tied atop the standings, though Camas has played one fewer game due to a COVID shutdown.

In an already crammed schedule, is there room to sneak in a tiebreaker? Union didn’t hesitate to pose the question on Twitter after the Tuesday result.

Yes, the game ball goes to Camas QB Jake Blair. And deservedly so.

But one of the biggest questions looming over the defending 4A state champs, who replaced a massive senior class from that run, was who would step up and provide help to a program pillar of a quarterback?

Guo, a senior, had another more than serviceable night (around 80 yards, one touchdown run) in place of all-state Nevada signee Jacques Badolato-Birdsell, who has watched games in sweats on the sideline while he recovers from ACL surgery.

But it was two receivers, Bryce Dewey and Andrew Caroussos, who provided the game’s biggest moments.

“(They) made some big-time catches that, if they don’t make those catches in those situations, we don’t have a chance,” Eagle said.

Caroussos, a junior, delivered an improbable 35-yard fourth down conversion, catching a deep ball from Blair over four defenders to keep the final overtime-forcing drive alive.

Dewey, a senior, had the first touchdown of the night, as well as a 61-yard go-ahead in the fourth quarter. And he caught the game-winning 12-yard end zone haul amid two defenders in double overtime. All in all, he finished with nearly 200 yards receiving and three touchdowns — and an interception on defense.

Neither wideout saw many targets in 2019. In Camas’ program, they were simply biding their time.

“Kids blossom,” Eagle said. “They emerge. We know what they can do, and they didn’t always show it, but their confidence is zooming after this because they feel like they can do anything. So, wow.”

Camas AD Rory Oster is of the same mind.

So after several players tested positive for COVID, stemming from an off-campus party, the Camas football program shut down practice for a week, canceling a game in the process.

Players who eventually tested positive participated in practice the Monday after they were believed to have contracted the virus and no further spread took place in practice, Oster said. Amid the obvious safety concerns of a swath of the team contracting the virus, the rules and structure in which students compete in a school-based setting — such as mask mandates, limited team gatherings and halted locker room access — worked.

“We have kids who were positive practice Monday in our practice, positive didn’t know it, and we’ve had zero positive cases from practice,” Oster said. “Safest place for our kids is in our school programs.”

The trials of the shortened spring season had worn on Camas leading up to Tuesday night. The flat, uninspiring loss to Union to start the season. The weeklong shutdown due to a COVID outbreak on the team.

“We’ve had a lot of things stacked against us, some of which we managed to bring upon ourselves,” Eagle said. “But that’s life. You’ve got to deal with it, recalibrate and prepare as best you can. It’s really a testament to those kids.”