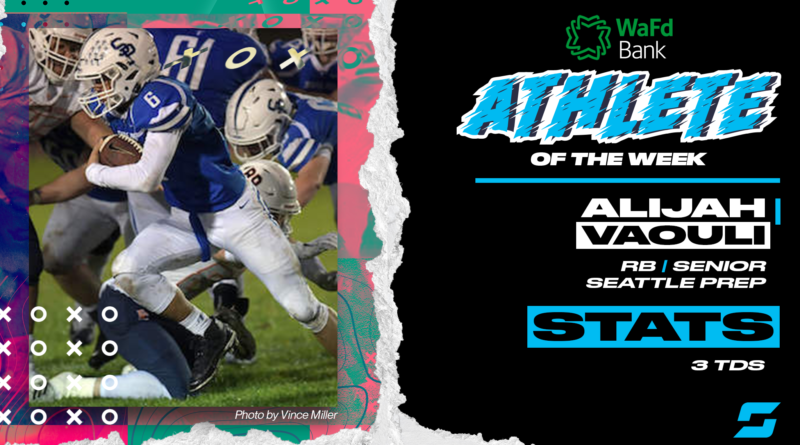 Vaouli had three touchdowns in a 28-0 win over Garfield — two rushing and another on a 50-yard return of a blocked punt.

Vaouli received 58.53% of the vote, beating out Graham-Kapowsin’s Julian Mason who finished second with 39.29%. North Kitsap’s Colton Bower finished third with 1.3% and Eatonville’s Job Kralik finished fourth with 0.18%. There were over 21,000 votes tallied this week!

Avery Ellis, Royal: The running back rushed for a game-high 122 yards, and returned a blocked punt 23 yards for a touchdown in a win over Ephrata.

Caden Jumper, Eatonville: The UW signee passed for 219 yards and two touchdowns, and added 105 rushing yards and three scores in a win over Fife.

Justin Brennan, Lakes: The senior passed for a season-high four touchdowns, complete 7 of 9 passes for 190 yards in a victory over Wilson.

Job Kralik, Eatonville: The sophomore wide receiver hauled in four passes for 142 yards and a pair of touchdowns in a win over Fife.

Ryan McKenna, Gonzaga Prep: The junior quarterback completed two passes – both touchdowns – for a season-high 145 yards, and added another rushing score in a victory over Mead.

Sam Huard, Kennedy Catholic: The UW signee had a monster season debut – 495 passing yards and seven touchdowns – in a victory over Tahoma.

Chance McDonald, Steilacoom: The Western Kentucky signee passed for 303 yards with six touchdowns in a victory over Lincoln.

Julian Mason, Graham-Kapowsin: The junior had a career day – nine catches, 204 yards and a 52-yard TD – in a showdown win over Puyallup.

Logan Brady, Steilaccom: The senior continues hauled in 12 receptions for 135 yards and a TD in a victory over Lincoln.

Colton Bower, North Kitsap: Threw for 402 yards and rushed for 107 more in a 41-7 win over Bremerton, reports The Kitsap Sun.

Daymond Gressett, Woodland: Totaled 298 yards rushing on 28 carries and three touchdowns in a 35-22 win over Mark Morris, per The Daily News.

JJ Jelsing, Wenatchee: The definition of putting the team on his back – he turned 25 carries into 205 yards in a 10-7 loss to Eastmont.

Drew Johnson, West Valley: Caught six passes for 152 yards, as well as four touchdowns in a 44-0 win over Davis, per The Yakima Herald.

Tobias Merriweather, Union: Scored twice in a league loss at Skyview — once on a 40-yard pass from Alex Gehrmann, and again on an 88-yard kickoff return.