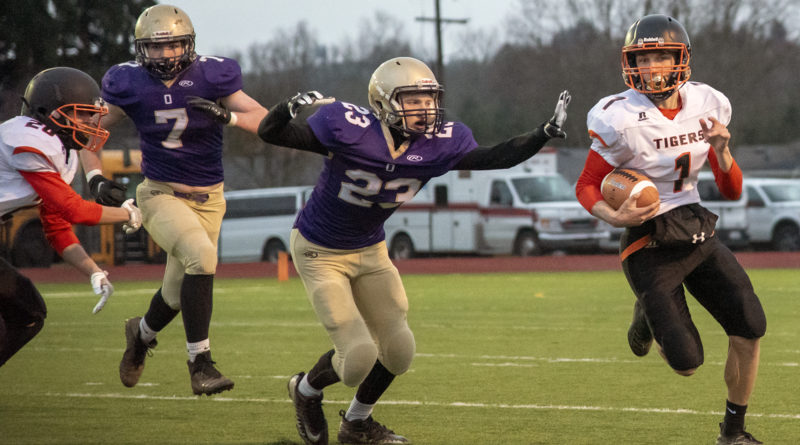 CENTRALIA – In their second meeting this season, it appeared that Onalaska would extend their win streak and go undefeated once again, but the Napavine Tigers battled back in the second half to earn a 42-28 win at Tiger Stadium in Centralia.

The first meeting this season was a 38-0 win for Onalaska. Napavine appeared to not forget that and was taking it out on the Loggers, although Onalaska was also delivering big hits on Napavine as well.

These two teams seem to have no love on the gridiron, as indicated by the extra curricular activities and chatter after each play, and it really got heated after Tanner Low scored the final touchdown of the game, with each team yelling at each other from across the field.

Both teams are big upfront and like to run the football hard, and that seemed to build the anger between the two teams throughout the game. Napavine played in the state title game in 2018 and lost to Kalama before the Loggers went undefeated in 2019 en route to the 2B state title, defeating the Chinooks in the championship game. They split the two games his season and I expect this rivalry to continue when they meet again in the fall.

Onalaska led 20-7 at halftime and looked like they would be putting the game away with a drive in the fourth quarter. But Napavine held Onalaska on fourth down on the 4-yard line, and the next play Laythan Demarest kept the ball on the quarterback option and ran 96 yards for a touchdown.

It was all Tigers after that, with Gavin Parker catching a 10-yard touchdown pass before Parker gave Napavine their first lead of the game with a 3-yard TD run. Onalaska turned it over on downs late in the fourth quarter and Low put the game away with a lengthy touchdown scamper in the final two minutes.

After losing the opening game of the season to Onalaska, the Tigers ended their season on a five-game win streak, and the comeback win against the Loggers on Friday was the icing on the cake for their season.

While the Loggers lost the game, they have a lot to be proud of in this game and season. Onalaska’s triple option offense was rolling against the Tigers, with senior quarterback Danny Dalsted and junior running backs Gunnar Talley, Kolby Mozingo and Marshall Haight all having great games on the ground. Talley and Mozingo each had two rushing touchdowns and Talley also had an interception on defense.

The offensive line is led by seniors Baltazar Cleveland-Barrera, Spencer Hamilton and Joaquin Patraca, but junior offensive linemen Aidan Readman and Daniel Malott will return next season for a Logger squad that is sure to be at the top of the 2B ranks once again.

There was only one touchdown through the air, a 10-yard pass from Demarest to Parker to tie the game. Every other touchdown was on the ground, and you can see why when looking at the offensive lines for each team.

The Loggers’ starting offensive line is mentioned above, but the Napavine offensive line matched up well with Onalaska. Anchoring the Napavine O-line is junior Keith Olson, who has gotten a few looks from some Division I schools. Senior Fernando Gaona is the most experienced of the group, but coming back next season are sophomores Gabe Harris and Deacon Parker and junior Deven Searles, along with Olson. Demarest is a senior but whoever takes the reins at quarterback next season will be well protected.

With the odd 2020-21 Washington high school football season during the pandemic, there is no state tournament to determine who the best 2B team in the state is. In my view, these two teams have been in the past two state title games, and both beat the team they faced in the state championship game this season in the Kalama Chinooks.

If the state tournament returns in the fall 2021 season, I believe these two teams will be in the final four, if not the state championship game once again. Napavine head coach Josh Fay and Onalaska coach Mazen Saade have built great football programs, and it doesn’t appear that will end anytime soon.