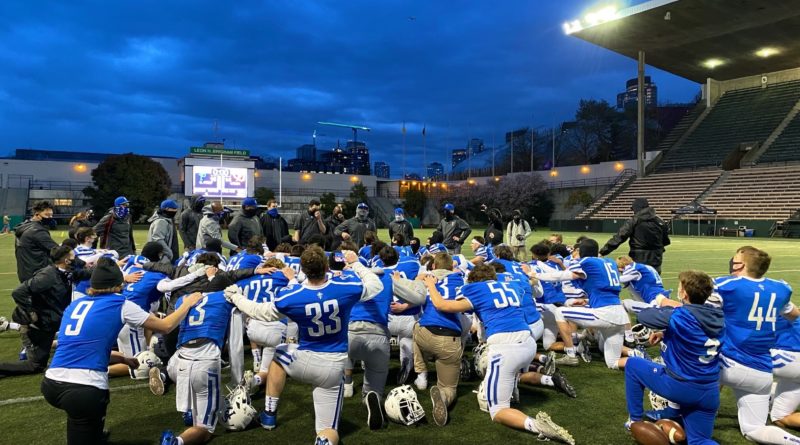 Seattle Prep had its shot. It didn’t hesitate a second to take it.

After Alijah Vaouli-Buchanan took a pitch three yards for  a touchdown to pull within one point of O’Dea with three seconds left, the decision whether to go for two had been made before the drive started.

“We knew for sure we were going for two,” Prep coach Aaron Maul said. “There was no question.”

Vaouli-Buchanan punched in the two-point conversion with the clock at four zeroes to lift Seattle Prep to a 15-14 win over O’Dea on Friday night at Memorial Stadium, the first win over the Fighting Irish since 1980.

It’s hard to understate what a win over a state powerhouse means for the Panthers (2-1), who opened the season two weeks ago with a loss to Ballard.

“There’s been a ton of phone calls, texts this evening,” Maul said. “We’re standing on these kids’ shoulders, they built this program.”

Save for the fact that Seattle Prep was without standout quarterback Jake Sype, who missed the game with a bruised achilles suffered in Prep’s Week 2 win over Garfield.

You wouldn’t have known watching the Panthers drive 50 yards in just over a minute to win the game.

Slot receiver, defensive back, return specialist and anything else Prep asks of him, Braeden Smith stepped in at quarterback and delivered a win 41 years in the making.

After O’Dea kicked off the scoring by punching in a short yardage touchdown run to cap an 80-yard drive late in the first quarter, Prep responded. Smith hit Jared Roznos for an 11-yard touchdown pass to equalize int he second quarter.

O’Dea took a 14-7 lead early in the fourth quarter.

Prep appeared poised to even the score late in the fourth when Smith converted a crucial fourth down pass to Kendin Alexander in O’Dea territory. But Smith’s ensuing deep ball was picked off by O’Dea defensive back Logan Johnson with 3:36 remaining.

“Our D was like ‘don’t worry about it, you guys are going to get another shot at this thing,” Maul said.

Seattle Prep’s defense answered the call, forcing O’Dea to punt, which set up the winning drive with 1:08 left.