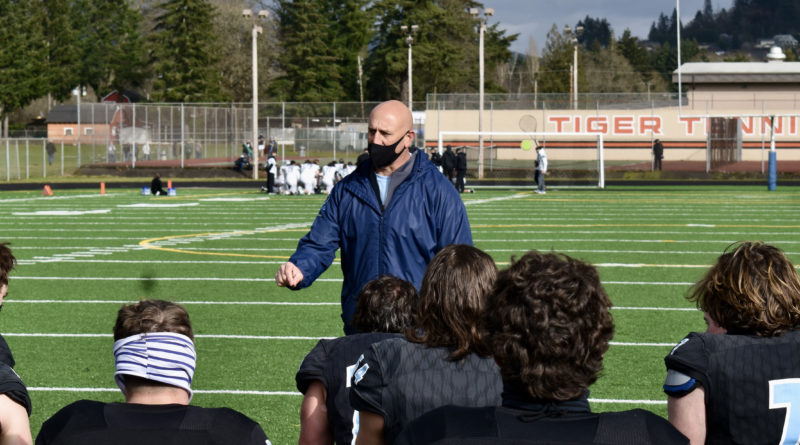 Rick Steele finished his ceremonial leap into the jumping arms of his players on Friday night at Washougal High School, a celebratory on-field ritual after every win.

Then, he delivered a message that, to his players, was unexpected. The leap was his last as Hockinson’s head football coach.

Steele, 58, submitted his letter of resignation to the Hockinson administration earlier this week, citing a readiness to retire from coaching and the job’s high demand. He leaves a program after 16 seasons that he helped build from scratch into a 2A powerhouse. Steele was hired as the school’s first head football coach when it opened its doors in 2004, and carries a great sense of pride that Hockinson can be muttered in the same breath as 2A powerhouses like Lynden and Tumwater.

“It’s just time to move onto a different phase of life,” Steele said. “Our program has gotten to be high-profile and it takes a lot of energy and time to keep it there and I just don’t feel like I have that anymore.”

The job opening will be posted Saturday morning, when Steele’s resignation goes into effect. Hockinson athletic director Josh Johnson said he hopes to fill it quickly.

Josh Racanelli, the architect of the Hawks’ offense throughout its two state title runs, says he is applying for the job and is believed to be the frontrunner for the position.

All in all, he caps a 36-year coaching career that started at his alma mater. Steele spent 12 years as an assistant coach at his native Hudson’s Bay, two years at La Center and three at Prairie before Hockinson. When the school opened, he leapt at the opportunity to build a football program.

“Just applying for that job and getting to coach in the community that I lived in was exciting for me, but I also knew it was going to be a challenge,” Steele said. “When you’re building a program from the ground up with no traditions, no real community support for a football program yet.”

Hockinson went 0-7 in Steele’s first year with a roster made up of only freshmen and sophomores.

In the early years, the Hawks steadily improved year over year, building a hard-nosed identity in a run-heavy offense. By 2007, Hockinson won a league championship and did so three times in his first nine years.

“We just kept expanding it from there,” Steele said.

Steele stepped away from the program in 2013 due to increased demand at his day job as battalion chief at the Vancouver Fire Department. Hockinson went 5-4.

The absence only lasted a year, and when he returned, he brought with him a new offensive coordinator in Racanelli and his unorthodox pass-happy offense that his sons, consecutive state Associated Press state players of the year Canon and Sawyer Racanelli, would thrive in through Hockinson’s run atop 2A.

The Hawks finished the 2021 season (5-0) with a seventh consecutive league title, which they solidified with a 24-14 win at Washougal on Friday. And they changed their identity to do it, winning games with show-stopping defense while the young offense continues to develop.

After 36 years of coaching — 16 at Hockinson — Steele feels confident the building blocks are in place for continued program stability, citing the seven consecutive 2A Greater St. Helens League titles minted on Friday night. Steele retired from the fire department in 2017, so stepping down from his coaching post marks his official foray into retired life. He plans to road trip around the country with his wife, Jill.

“He’s an institution, hands down, an institution in our community,” Johnson said. “We’re going to reap the benefits from his leadership for years to come.”