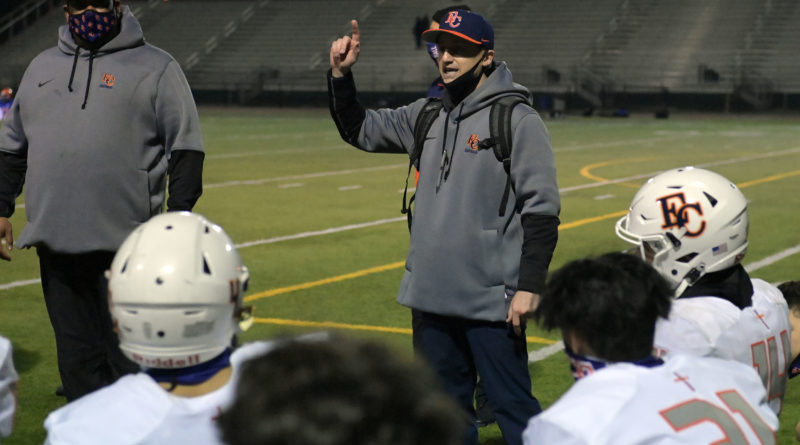 By the time Marcus Ungaro stepped onto Eastside Catholic’s campus, he’d heard plenty about JT Tuimoloau, the Goliath defensive end who is widely considered to be the top high school football prospect in the country.

But what really raised his brows was the deep pool of talent around Tuimoloau. After all, you don’t win four of the last six 3A state titles with a standout or two.

“You start going down the roster, and I don’t think there’s a weak point,” he said.

The Crusaders (2-0) quietly carried out a passing of the torch in its prolonged offseason, hiring former New Orleans Saints assistant coach Ungaro as defensive coordinator, a year after adding former prolific Lakes QB and high school All-American Drew Miller as its offensive coordinator.

The two met while they were both coaching for the now-defunct Seattle Dragons of the XFL — Ungaro as the defensive backs coach. When Christoff said he was leaving his post as Eastside Catholic’s DC, Ungaro was intrigued.

After talking to Eastside Catholic coach Dominic Daste, Ungaro’s decision to pursue the job was a “no-brainer.”

“We feel really fortunate to have (Ungaro) around,” Daste said. “Rob was special, right? His ability to teach was his biggest asset. He was a bit of a savant seeing and understanding things. Translating that to kids in a simplistic form was his biggest attribute.”

The brains of Eastside Catholic’s defense for a decade, Christoff first came over from the University of Idaho when Jeremy Thielbahr was hired as the Crusaders’ head coach in 2011. When Thielbahr stepped down in 2019, and Daste took over, Christoff stayed on board for a season.

“(Marcus) fits in well with us,” Daste said.

After graduating from Washington State in 2007 through a satellite program, Ungaro was determined to get his foot in the door in the NFL.

“I was going to figure out a way to make it happen,” he said.

He found no luck with his hometown Seahawks, so he called Mickey Loomis, the general manager of the New Orleans Saints. Loomis’ son, Alex Loomis, was a classmate of Ungaro’s at Eastlake High School, where he graduated in 2003.

New Orleans was two years removed from Hurricane Katrina and still rebuilding and Loomis offered him an internship in the PR department. From there, Ungaro climbed his way into the video department working with coaches and scouts every day and helping out with whatever projects they threw his way.

“I thought I was going to be there three or four months, and I think they forgot about me,” Ungaro said, with a chuckle. “Made it 11 years.”

After the Saints won Super Bowl XLIV (Ungaro has a ring to prove it) a spot opened in the scouting department and Ungaro was in position to fill it — until he got a call to become a defensive assistant focusing on defensive backs.

He spent the next seven years on the coaching staff, before moving back to Seattle for a change of pace with his wife and young family in 2018 and got a job in the tech world — first at Tableau, then Microsoft, where he works in customer success.

Ungaro, whose coaching mentors include Sean Payton, Rob Ryan and Dennis Allen, says he was drawn to Eastside Catholic by its winning culture.

Since joining the two-time defending 3A state champs, he’s appreciated the eagerness players show to learn and be coached, whether it’s the No. 1 recruit in the country, or someone who simply wants to wear the jersey to be a part of something.

Early returns on Ungaro’s addition have been favorable.

And structurally, the defense doesn’t look much different.

The Crusaders opened the season by shutting out rival O’Dea, the preseason No. 1 team in the state team across classifications, 20-0 in a game that was won at the line of scrimmage. Ungaro’s defense held an O’Dea team (albeit short-handed) headlined by blue chip offensive guard Owen Prentice and highly-touted 6-foot-4, 311-pound guard Mark Nabou, to 95 total yards.

The performance validated questions of how sharp the team would start under pandemic circumstance, where some of Ungaro’s early days at EC were spent ingratiating himself to players over zoom and hoping players were keeping up with their workouts in isolation.

“I was telling the defense, there’s a lot of reasons to fail this year,” Ungaro said. “There’s going to be so many built-in excuses for so many teams and that’s not going to be us. It’s one of those things where the championship-level teams take care of their business.”

Months into his first foray into the high school game, Ungaro feels right at home.

“I get asked from some of my friends I’ve coached with in the NFL or wherever, like ‘how is it coaching high school football?’ ” Ungaro said. “When you get out on the football field, it’s football. These kids want to learn, and it’s about everyone getting on the same page, knowing how to do your job and executing. From that standpoint, it’s been great.”