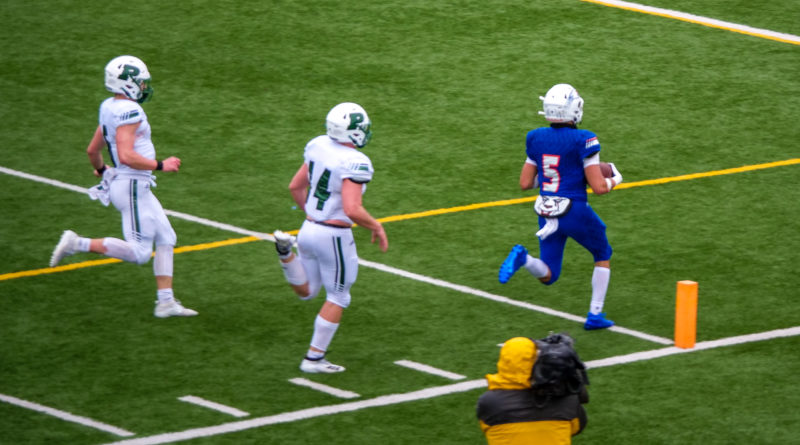 SPANAWAY — Va’a Hansen scored five touchdowns and Graham-Kapowsin defeated Peninsula 49-24 in a battle of unbeatens Thursday in a 4A SPSL game.

The Eagles showed yet again that they are likely the best 4A team in the state.

“It shows who is really working,” Hansen said. “Everyone wants to preach it, but it shows we are really working out here at Graham-Kapowsin.”

Hansen returned an interception for a touchdown, rushed for two touchdowns and caught two more in the victory at Art Crate Stadium. He finished with 205 yards rushing on 24 carries and 65 yards receiving. Jalen Davenport rushed for a touchdown and 41 yards before leaving with an injury and quarterback Joshua Wood was 10-for-16 for 162 yards and two touchdowns.

Landon Sims had five receptions for 109 yards, nine carries for 41 yards and an 11-yard touchdown run to lead the Seahawks (4-1), while quarterback Jake Bice was 13-for-25 for 230 yards and two touchdowns.

HANSEN IS A SWISS-ARMY KNIFE

The senior do-everything-player for the Eagles didn’t have a touchdown on the season, but that changed on the third play of Thursday’s game.

He intercepted a Jake Bice pass and returned it 45 yards for a score.

“Everything clicked,” Hansen said. “We came to play. They tried saying they were going to come out here and show what 4A football is, but nah, we did that.”

Hansen scored on a 41-yard pass and a 24-yard reception and added touchdown runs of 5 and 1 yards.

“He is an incredible athlete,” Graham-Kapowsin coach Eric Kurle said. “He has played so well on defense for us all year, returning kicks, getting six or seven carries at running back and a bunch of plays at receiver. He has been doing a little bit of everything.

“He is one of those special athletes with the ball in his hands.”

INJURIES PILE UP FOR EAGLES

Sophomore running back sensation Jalen Davenport looked to be on his way to another monster night Thursday.

He had 41 yards on nine carries and a touchdown when he picked up a first down on a run to the left side late in the first half.

But he came up limping with an injured ankle and was then held out the rest of the game as a precautionary measure. He twisted an ankle two weeks ago against Puyallup, but it was unclear if it was the same ankle he injured this time.

Senior Jonas Waugh, a goal-line specialist and linebacker, appeared to dislocate his shoulder late in the first half.

Graham-Kapowsin likes to run the ball and they showed why Thursday, racking up 341 yards on the ground on 51 carries.

“We wanted to come out and be dominant as an offensive line, as an offense and as a team,” junior lineman Joshua Holder said. “We walked into this season wanting to be great and to be the best offensive line Graham-Kapowsin has ever had. That has been the motivation.”

They certainly dominated Thursday and with plenty of youth on the line, the Eagles figure to dominate in the fall as well.

After struggling in the first half, Peninsula pulled out everything they had in the playbook to score 18 second-half points.

The Seahawks had a fake punt conversion in the first half, then a kickoff return for a touchdown, a double reverse pass completion and a pair of long runs off of a jet sweep toss in the second half.

“We had a saying this week that we are going to shoot every bullet in our chamber,” said Peninsula senior Landon Sims. “We definitely threw some things out there that no one had seen before. It is always fun, especially when it works out in our favor.”

The trickery helped keep the Eagles from completely running away with the game as it looked like might happen in the third quarter.

Bryce Cleave returned a kickoff 84 yards, running straight up the middle. That followed a 53-yard return by Chase Coalson, setting up a Bice to Chris Akulschin touchdown with 10 seconds left in the half.

“We just came out in the second half and changed our mentality,” Coalson said. “We focused things up and cleared some things up and we still wanted it and we weren’t going to quit.”

NO LEAGUE TITLE, BUT STILL A STRONG 4A SHOWING FOR PENINSULA

The Seahawks, who are playing up a classification this season, had hopes of grabbing a 4A league title.

While that didn’t materialize on Thursday, the Seahawks did show that they can hang with the big boys.

“I’m really proud of our kids and how resilient they have been,” Peninsula coach Ross Filkins said. “For them to come out and play this hard against probably the top team in 4A was a great showing for our kids.”

The Seahawks made a few too many mistakes in the first half to have a shot at taking down the Eagles, but overall they have been happy with how they’ve played this season.

“We are ready for everything,” Sims said. “Doesn’t matter if they are state champs or 2A. We show up every week.”