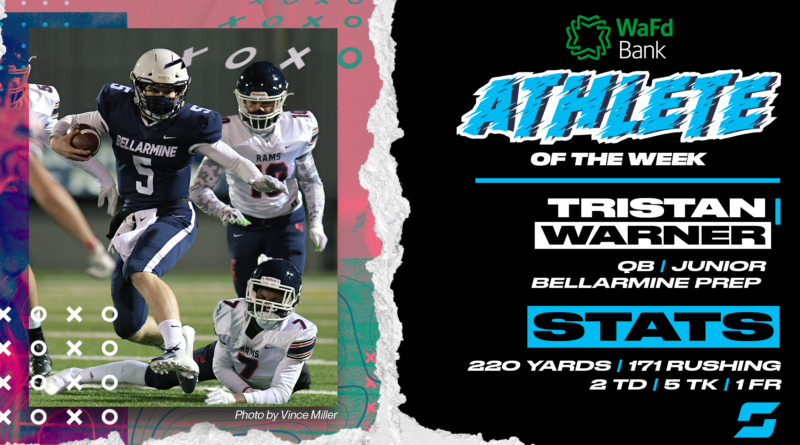 Sam Anderson, Colville: Totaled five touchdowns in a 48-0 season-opening win over Medical Lake: three through the air (184 yards passing), two through the air (144 rushing), according to The Statesman Examiner.

Jay Harper-Brooks, Fife: Turned 15 carries into 153 yards and three touchdowns in a win over Washington, per The News Tribune.

Tyson Lang, Glacier Peak: Accounted for three touchdowns — two passing and one on his feet — in a 35-7 win over Marysville Pilchuck.

Unterrio Latin-Henley, Eastside Catholic: Freshman caught touchdown passes of 67 and 12 yards, which totaled 109 yards on five catches, in his debut — the Crusaders’ 20-0 shutout of No. 1 O’Dea.

Conner Noah, Kelso: Ran for 189 yards, three touchdowns and had a pick-six in a lopsided win over Battle Ground.

Andre Northrup, Hockinson: Caught eight passes for 137 yards and a touchdown and added two interceptions on defense in a win over Columbia River, per The Columbian, a week after recording a pick-six and 99-yard kickoff return for touchdown.

Sonny Pitts, Union: Kicked a school record 47-yard field goal in a win over Mountain View after setting the record with a 45-yarder in Week 1.

Wyatt Partridge, Castle Rock: Had 177 rushing yards — 105 in the first half — on 16 carries and three touchdowns in a 48-0 win over Columbia-White Salmon.

Michael Purl, Cascade: Rushed for 180 yards and two touchdowns in a lopsided win over Cedarest, reports The Everett Herald.

Riley Rudolfo, Monroe: Logged three interceptions and a touchdown catch in a 14-0 win over Arlington, per The Everett Herald.