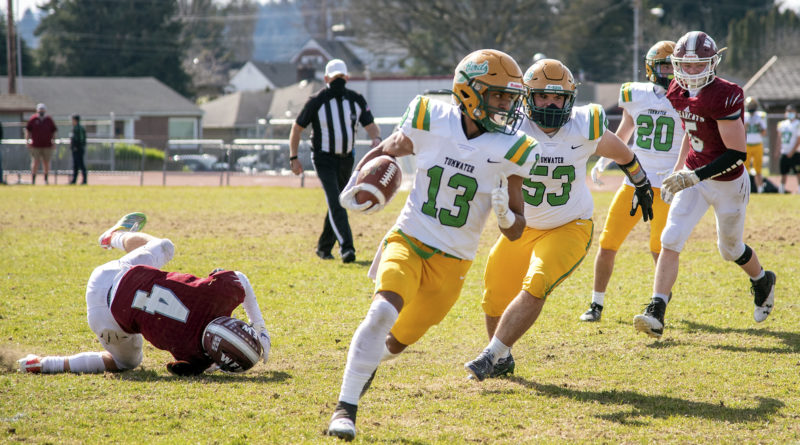 CAN’T WIN IF YOU DON’T SCORE

The offense helped put the game away for the T-Birds, but it was the defense that stifled W.F. West throughout the game. Anchored by senior Cooper Wall (a great name for a defensive lineman) and junior Ryan Otton, they were able to get to quarterback Brit Lusk and contain running back Max Taylor and not allow W.F. West’s offense to get anything going.

TUMWATER HAS AN EXPLOSIVE OFFENSE

Tumwater’s offense scored 41 points, including 34 points in the first half. Whether it was senior Jack Jones or sophomore Carlos Matheney, it didn’t matter. Matheney had two touchdowns, including a 4th and 1 play that looked to be stopped before the first down – but Matheney broke a couple tackles and scampered in for a score.

Jones caught a TD pass from quarterback Cody Whalen. Austin Terry and Noah Cunningham had touchdown catches to show the versatility of the Tumwater offense. Whalen threw four touchdown passes and the Thunderbirds started the running clock midway through the third quarter.

While the Bearcats lost the game, there were still positives W.F. West can take from it.

The defense stopped the Tumwater offense on more than one occasion. Sophomore Daniel Matagi and junior Brock Guyette each had good games on the defensive line for the Bearcats. Senior defensive backs Carter McCoy and Cade Haller each had a good game in pass coverage.

Senior Brit Lusk stepped in at quarterback for the usual starter, sophomore Gavin Fugate, and played decently in a tall order for him against the Tumwater defense.

There aren’t many teams in the state, let alone 2A, that can match up with the size of Tumwater. It was on full display on both sides of the offensive and defensive line as well as the linebackers, running backs, defensive backs and tight ends for the Thunderbirds.

WILL TUMWATER RUN THE TABLE?

The Thunderbirds have been rolling through their schedule, beating their four opponents by an average of 50 points. They clinched the Evergreen 2A Conference title once again with the win over the Bearcats, and without a state tournament this season, it would appear their game against Steilacoom will be an unofficial state title game. The Sentinels are coming off of a 37-27 win against 3A Lincoln and look like they will give Tumwater their closest game of the season.