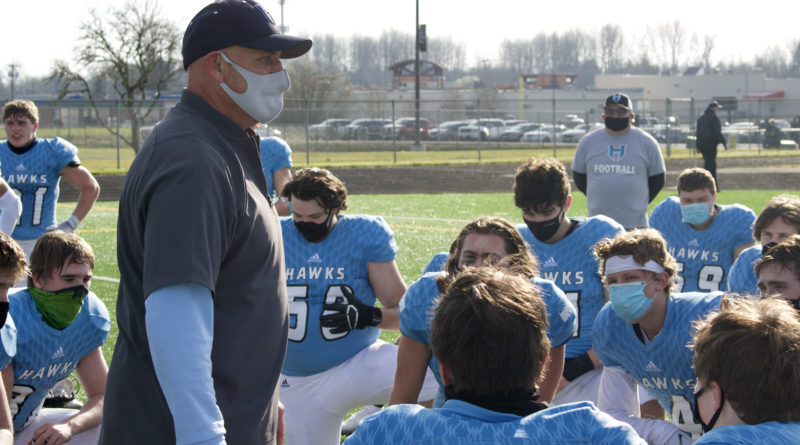 BATTLE GROUND — Hockinson established itself as a statewide name brand for its air attack and mind-bogglingly explosive offense that netted the school back-to-back state championships in 2017 and 2018.

Now, in the year 2021, the Hawks are winning games with show-stopping defense.

Hockinson beat previously undefeated Ridgefield 14-7 on Saturday afternoon at District Stadium in Battle Ground to clinch at least a share of the 2A Greater St. Helens League title in a season where such an accomplishment is the mantle possible.

A win in its season finale next week against Washougal would make it seven straight outright league titles for the Hawks.

They have their defense to thank for that.

The Spudders had averaged more than 46 points per game through three contests. Hockinson held Ridgefield to a touchdown.

“Our defense is really reliable when our offense isn’t,” sophomore Tyler Litle said. “It’s what won us this game and it’s what won us almost all of our games this year. It’s really good to see.”

On Saturday, the game came down to a goal line defense stand. When an errant snap on a Hockinson punt resulted in Ridgefield getting the ball at the Hockinson five yard line with just over two minutes left, trailing 14-7.

On first down, Litle came around the edge and stuffed quarterback Tanner Roberts in the pocket, knocking off his helmet and sending the Spudders back several yards. And he did it wearing a wrapped cast on his left arm after fracturing a knuckle in Week 1.

Ridgefield had three more shots at the end zone, the last of which Litle busted up again by sharing another sack, sealing a game-deciding red zone stand.

It was the second of two turnovers on down Hockinson forced inside its own five yard line.

Hockinson led 14-0 through three quarters, thanks to a short touchdown run by quarterback Jared Oldham and a 51-yard scamper by Daniel Thompson early in the first quarter.

“Two really good football teams that beat up on each others for four quarters,” Ridgefield coach Scott Rice said.

Ridgefield, despite the loss, was in position to compete for a league title for the second consecutive year under Rice, a second-year head coach and branch off of the Steve Kizer tree at Skyview.

Rice has assured in quite a turnaround in a rapidly growing suburban city where the team finished near the bottom of the league in 2018.

“Need a little depth, need some guys to develop in the weight room in the next six months,” Rice said. “I don’t think that game is the last you’ll hear of us in the league, and in the state. I’m happy with where we’re going, I think we’re on the right trajectory and we’re just going to keep getting better.”