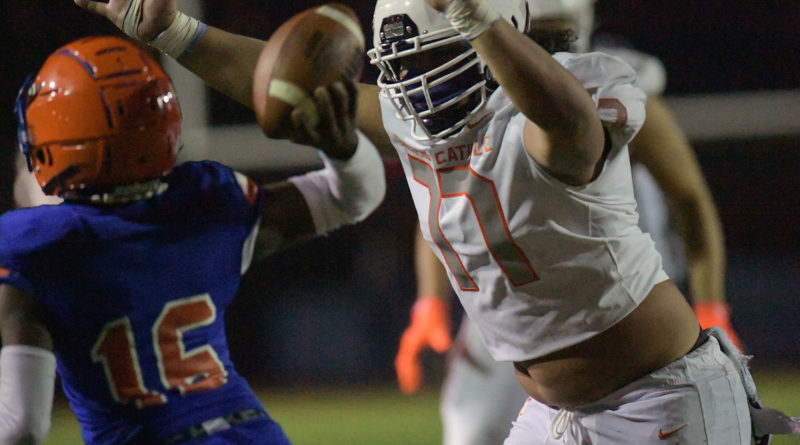 SEATTLE — Eastside Catholic’s offense didn’t get going until the second half. The timing was fitting for at least one reason.

Crusaders parents whooped and hollered from tailgate tents and a party bus on the outside of the stadium’s west end fence, the closest vantage to the end zone during four of the five touchdowns on Friday night.

Eastside Catholic beat Rainier Beach 35-0 at Rainier Beach High School. The Crusaders (2-0) have yet to give up a point through two weeks, thanks in part to what Beach coach Corey Sampson calls the best front seven he’s seen in recent memory and the addition of former New Orleans Saints coach Marcus Ungaro.

Eastside Catholic led 7-0 through the first half and scored four more touchdowns after the break without allowing a point. It’s the Crusaders’ second consecutive shutout.

“I don’t care who you play, when you shut out a team, it’s a big deal,” Eastside Catholic coach Dominic Daste said. “At least here, it’s a big deal. We feel good about that.”

When the offense needed a boost, Daley delivered.

First, he caught a touchdown pass over the middle to put the first points on the board early second quarter, after the Crusaders took penalty upon penalty in a redzone trip that seemed like it might never end.

Then, he helped kick off the second half by taking a screen pass more than 40 yards for a touchdown. Daley faked like he was blocking, turned his body to catch the pass parallel to the line of scrimmage, split the safety and dragged a couple defenders into the endzone to put EC up 14-0 with 9:30 left in the third quarter.

“Feels great, man,” Daley said. “I’ve been working a long time for it. I knew coming into the game that I’ve been preparing better than anyone else, so I’ve just got to go show it.”

Primarily a rotation linebacker as a sophomore in 2019, Daley battled minor injuries throughout the season. He packed muscle onto his body (it’s noticeable) and Daste says he was among the team’s most dedicated players throughout the shutdown transforming his body and mastering the playbook.

“He’s turning out to be one of our better players,” Daste said.

Friday night was no accident.

“I always say we have a lot of guys who can play offense and defense,” Daste said. “But to do it mentally because of what we ask of our kids scheme-wise is really hard, and he’s doing a great job.”

HOW TO CONTROL THE NATION’S NO. 1 PLAYER? ‘IT’S NOT FAIR’

In 2017, losses were few and far between for Rainier Beach. The Vikings went 10-3 and reached the 3A state title game, where it lost to O’Dea, a team responsible for two of its three losses that season.

The other L? That came at the hands of Eastside Catholic, which boasted its typical load of talent across the board. When beach played Eastside, Sampson spent enough time preparing for the players he knew about. Little did he know a lesser-known freshman would have himself a day.

As Beach prepared to face Tuimoloau one last time on Friday, Sampson’s message on how to contain him at tight end was simple. Carrying it out is not.

“Try to chip him off the line of scrimmage, and don’t let him (get free),” he said.

That comes from three years of experience trying to contain a potential future NFL player, starting with that Week 3 game in 2017, when a bright-faced Tuimoloau gave a solid Beach O-line fits.

“He got a USC offer the next day, and we were like ‘who was this guy?’ ” Sampson said. “He was just constantly in the backfield.”

Sampson may not exactly have predicted Tuimoloau would become the nation’s top prospect. But he saw something special that day, qualities atypical of a ninth grader.

One summer, Rainier Beach had four-star QB Ari Patu — now at Folsom (Calif.) signed with Stanford — under center for a 7-on-7 tournament. When Eastside Catholic came up on the schedule, Sampson had to do another double-take when he looked to see who was lined up at free safety.

“He held his own, better than other safeties there that day,” Sampson said.

After a week rolling the same film of Eastside Catholic shutting out powerhouse O’Dea 20-0 in Week 1, Rainier Beach coach Corey Sampson was convinced.

The Crusaders’ front seven is the meanest, baddest, most imposing and disciplined group he’s seen in recent memory.

“They’re the size of baby gorillas if you look at 71 over there,” Daste said, pointing to 6-5, 300-pound Peter Taoipu, “and the rest of them, they’ve played a lot of football.”

It helps when your edge rusher, Tuimoloau, is the No. 1 recruit in the country, and four-star junior LB Dishawn Misa is hovering in the middle of the defense — all under the leadership of new defensive coordinator Marcus Ungaro, who replaced longtime DC Rob Christoff and spent some 10 years with the New Orleans Saints, climbing the ranks to become a defensive assistant.

“Good defense has been played for a long time here,” Daste said. “The faces may change, coaches and players, but it’s important to play really good defense here. I think they’re just carrying on that tradition, paying attention to detail and playing really hard.”

BEACH’S RESPONSE TO A DISAPPOINTING WEEK 1 LOSS? BACK TO FUNDAMENTALS

Defensively, Rainier Beach had plenty to be proud of in its Week 1 debut against Garfield.

Eight QB sacks. Asserted itself on the D-line. Offensive line held its own.

But Beach was undone by a lights-out performance from kicker/punter Marcus Merkelbach, who kicked two field goals (including a 43-yarder) and pinned Beach inside its own three yard line twice, and a late pick-six and 70-plus yard house call on a slant route.

To even compete with Eastside Catholic, the Vikings needed to limit the big play. That means tackling well against a team that is littered with soon-to-be Division I talent.

“We worked on tackling on Monday,” Sampson said. “Making sure the first guy hits, holds up, gator rolls … it comes down to will and effort.”

It showed early on Friday.

Beach was defensively sound in the first half. For the most part, the Vikings bottled up Eastside’s run game, plugging the lanes up the middle, and held the two-time defending 3A champs to seven points in the first half.

“We just lost our composure when they scored after halftime,” Sampson said. “We’ve just got to get disciplined.

Four-star OL Josh Conerly left the game at halftime with a minor injury and did not return, allowing the Crusaders’ run game to take off in the second half.

BEACH TO MOVE DOWN TO SECOND-TIER METRO LEAGUE

Rainier Beach wants to be competitive. It also wants to protect its players’ safety.

So the Vikings are moving down to the second-tier Metro League division for the remainder of the season, citing low turnout and an ever-thinning depth chart as the roster hovers around 25 players as of Week 2 of of the shortened 2021 spring season.

The Metro League operates under a promotion/relegation system. The top team in the lower leagues have the option to opt up at the end of each season, and the bottom teams can drop down.

But after a 2-8 season in 2019, Sampson was convinced he brought back enough to compete against the O’Deas and Eastside Catholics in the Mountain division.

“We have some good players,” Sampson said. “It just comes down to depth and attrition … there’s a big void between the No. 1 player in the nation (Tuimoloau) and a guy who has barely played football at all, period.”

Instead of Ballard, O’Dea and Seattle Prep, Beach will now play Lakeside, Roosevelt and Chief Sealth to finish the season.