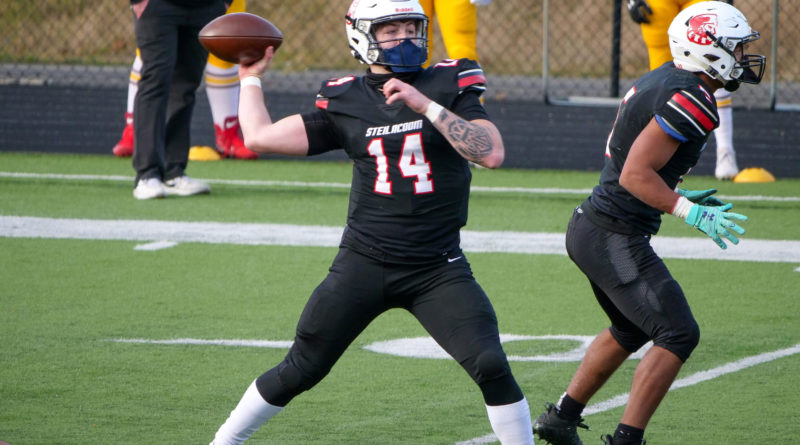 The Steilacoom Sentinels may only be a Class 2A school, but they are playing like one of the big boys this season.

On Friday, a dazzling aerial attack led the Sentinels to a 37-27 victory against Class 3A Lincoln.

“We tend to get overlooked because we are a 2A school and Lincoln has been running this area for so long,” Steilacoom wide receiver DJ Fryar said. “They come here and we play like we did and we dominated … that is the greatest feeling.”

Fryar was a big reason why as he had four receptions for 79 yards and four touchdowns. Logan Brady had 12 receptions for 135 yards and a score and quarterback Chance McDonald was 22-of-36 for 303 yards with six touchdowns and two interceptions.

DJ FRYAR IS JUST GETTING STARTED

Fryar injured his shoulder early in the season opener against Enumclaw and then missed the Sentinels second game.

“He struggled with his range of motion at practice this week and he was tender trying to catch the ball,” Steilacoom coach Colby Davies said. “He showed up today and said he was ready to go. With him on the field, we are a different team.”

One of his four touchdown receptions was a highlight reel grab on a fade into the corner of the end zone. He also hauled in a 35-yard touchdown where he tiptoed the sidelines and bowled over a pair of defenders.

“That was willpower,” he said. “I wasn’t looking for a touchdown. I was just looking for a catch and then he bounced off of me and I went from there.”

CENTRAL WASHINGTON IS GETTING A STEAL IN LOGAN BRADY

Brady, a senior wide receiver, is not the biggest kid on the field, but he is certainly one of the craftiest. The NCAA Division II Central Washington-signee put on a show Friday.

The 6-foot catching machine consistently runs the best routes and showcases the best hands on a team loaded at wide receiver.

When Steilacoom needs a first down, the coaching staff and quarterback Chance McDonald often look his way.

“He is so steady. So consistent. When we are calling a concept and need a route run or a double move, it’s Logan Brady we are looking to,” Davies said. “We know we want to go to him on third or fourth down when we really need it.”

He had 12 receptions for 135 yards and a touchdown Friday, consistently getting to his spots against a bewildered Lincoln secondary.

“That’s really been Heir Football and working with Reggie Jones,” Brady said of his route running. “Working with Emeka (Egbuka) and Chance over the summer four days a week and just working on the craft every single day.”

With no state playoffs this season, the Steilacoom coaching staff has worked hard to come up with a narrative each week to keep the team focused and prepared.

So far, it hasn’t been very hard.

In their opener, the Sentinels played Enumclaw, which had just dropped down from Class 4A. After an easy Week 2 win against White River, Steilacoom then got a shot at Class 3A Lincoln which lost in the state semis last year.

“In this area, we are just the little 2A school and we wanted to come out and represent today,” Davies said. “This is a statement game to put everyone around the area on notice that we can play. We’re not just 2A runners-up, we can play with everyone. And they proved that today.”

The Sentinels will get another shot at proving how good they can be when they travel to Tumwater next Friday in a rematch of the Class 2A state title game.

The next big-time quarterback to come out of the Tacoma area is certainly wearing No. 5 for the Abes.

The sophomore slinger for Lincoln threw for 359 yards and four touchdowns Friday, while also carrying the ball 12 times for 48 yards.

“He is really growing in the last few weeks,” Lincoln coach Masaki Matsumoto said. “He is doing the little things like carrying out his fakes and sprinting out on his sprint outs. It’s a testament to his commitment the last two weeks.”

Johnson stood strong in the pocket despite pressure and routinely hit on big plays down the field.

He did show his youth at one point when he threw an up-for-grabs ball to the end zone and was intercepted, rather than just running out of bounds.

INJURIES PILING UP FOR STEILACOOM

With the lack of a normal preseason to prepare for football this year, the injuries have been coming fast and furious for Steilacoom.

On Friday, they lost senior wideout Tre Horner to a hyperextended knee, senior lineman Sam Stowers went down with severe cramping in his lower legs and Tre Owens was banged up at the end of the game.

“This is the most injuries I’ve ever had as a coach,” Davies said. “It’s unbelievable. They are dropping like flies.”

In the Week 1 win against Enumclaw, Fryar hurt his shoulder and was knocked out of the game and lineman Lance Garcia injured his knee and has yet to see action since then.

Despite the injuries, the Sentinels are more than happy to be on the field.

“It’s been tough trying to cram all these seasons in,” Davies said. “It takes a toll on player safety in that regard, but we are just happy we are playing.”