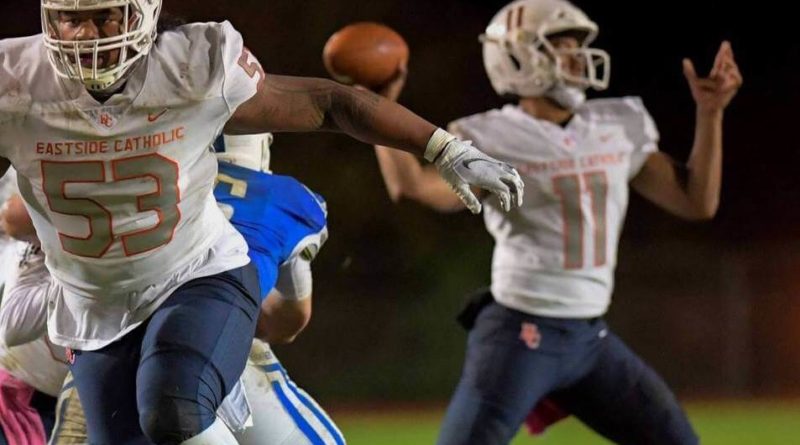 With the 4A NPSL and 4A KingCo set to kick off their seasons this weekend, every WIAA league should now be playing football (again) in 2020-21.

Here is a quick recap of last week’s highlights, and a look forward to Week 4 storylines and games to follow:

THREE THINGS WORTH REVISITING FROM WEEK 3

Yes, the talent-laden Crusaders lost a lot of college-bound talent after their run to the Class 3A title in 2019. But not so much that they’d slip drastically. Led by J.T. Tuimoloau on the outside, and John Taumoepeau, Peter Taoipu and Abel Faletogo on the interior of the line; and Dishawn Misa playing a physical linebacker – Eastside Catholic held No. 1 O’Dea to 97 rushing yards in a 20-0 victory in Sammamish.

After impressive road win, Tumwater cements itself as 2A titan

It was the state powerhouse matchup made mid-week as No. 1 Tumwater, in search of a game after Black Hills canceled, firmed up a trip east to play at No. 4 Prosser on Saturday afternoon. After a tight one-and-a-half quarters, the Thunderbirds scored twice in 10 seconds midway through the second quarter, and went on to defeat the Mustangs, 48-10. It was a rematch of the 2015 state title game, won by Prosser.

Oh yeah, 1A champion Royal can play with the big boys, too

Royal football coach Wiley Allred studied Eastmont a lot in the offseason, and knew it would be a challenge for the defending 1A state champion Knights to match up with a 4A program. But they did – convincingly. Caleb Christensen threw for 311 yards and four touchdowns, and Royal forced five Eastmont turnovers in its first win (50-10) over a 4A or 3A school since 2006 (beat 3A Peninsula, 21-7).

The 4A NPSL is one of the last leagues to play games, so No. 3 Kennedy Catholic, led by UW signee Sam Huard at quarterback, is ready to get going Friday night at Tahoma. “Sam looks great,” Lancers coach Sheldon Cross said. “He is excited. He is really looking forward to playing with his teammates again, and finishing his senior year on a great note.”

Also, the KingCo gets back into action this weekend with a slate of attractive games: Woodinville at Bothell; Mount Si at Bellevue; Eastlake at Redmond; and Inglemoor at North Creek. “It’s nice being able to call another coach and ask, ‘What did you figure out (for COVID-19 football)?’ and how to be prepared for some of this stuff,” Eastlake coach Don Bartel said.

Is Class 2B title game rematch an elimination game?

The 2B Central League is hosting a crossover championship game in this shortened season, and the winner between defending 2B champion Onalaska and No. 2 Kalama for the Central South divisional title on Friday – also rematch of the 2019 state title game – would clinch a date against Central North winner Napavine next week. The Loggers won, 48-30, in the 2B title game.

Skinny: When these two lines go at it, there will be (literally) a ton of college talent going at it in the trenches of 4A SPSL showdown.

Skinny: Collision between Kamiakin RB Tuna Altahir and Chiawana LB Cameron Breier might produce thud heard in all of Tri-Cities.

Skinny: 4A KingCo blockbuster right out of the gate is rematch of 2019 state semifinals – won 31-21 by the Cougars on this field.