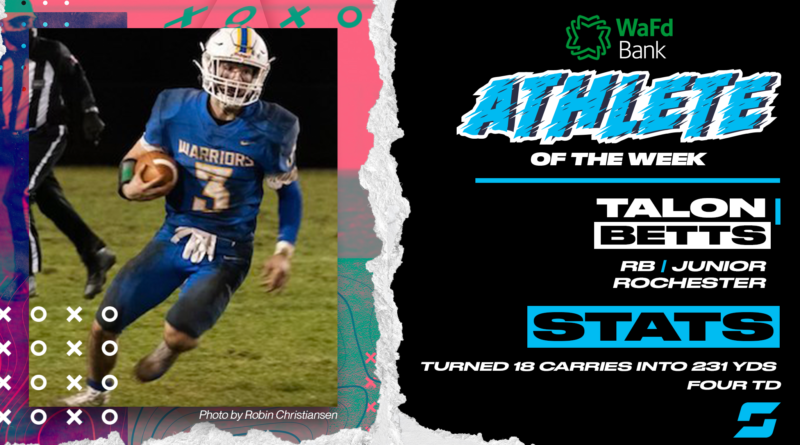 The junior turned 18 carries into 231 yards and four touchdowns in a 40-34 win over Centralia, reports The Chronicle.

Logan Brady, Steilacoom: Caught 10 passes for 171 yards and a touchdown in Steilacoom’s 14-7 season-opening win over Enumclaw.

Isaiah Carlson, Ferndale: Rushed for 127 yards and a touchdown in Ferndale’s 28-19 win over Lynden.

Diamon Carrasco, Grandview: Logged 107 yards receiving, including a 50-yard touchdown reception, in a 14-6 win over La Salle, per The Yakima Herald-Republic.

Austin Charter, Columbia (White Salmon):Rushed for 154 yards and two touchdowns in a 39-12 win over Fort Vancouver, reports The Columbian.

Luke Holcomb, Puyallup: Threw for 212 yards and four touchdowns in a 44-16 win over Lakes.

Tre Horner, Steilacoom: Caught seven passes for 120 yards and a touchdown in a 14-7 win over Enumclaw.

Ryan McKenna, Gonzaga Prep: Rushed for 112 yards on 18 carries and threw for a touchdown (with an interception) in the Bullpups’ season-opening win over Mt. Spokane.

Joshua Perez, Toppenish: Completed 13 of 19 attempts for 242 yards passing and four touchdowns in a 38-14 win over Naches Valley, reports The Yakima Herald-Republic.

Laythan Demarest, Napavine: Completed eight of 13 passes for 149 yards and two TDs and rushed for a game-high 159 yards and two scores in a win over Rainier.

Hayden Baker, Forks: The big senior fullback rushed for 136 yards and a career-best four TDs in a win over Pe Ell/Willapa Valley.