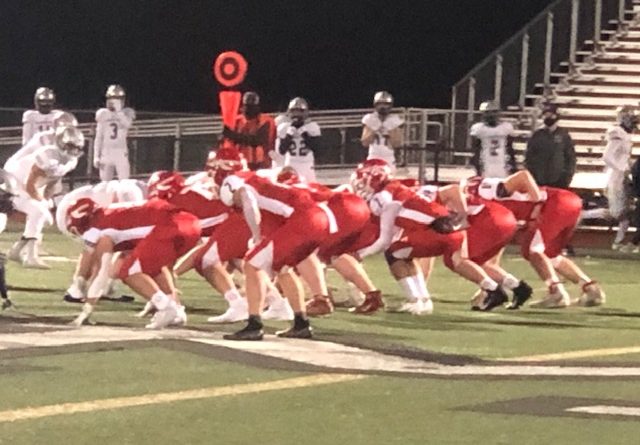 MARYSVILLE – Glacier Peak senior running back Ryan Black set the tone on Saturday, scoring the Grizzlies’ first touchdown on a 10-yard run in a 35-7 non-conference win over Marysville Pilchuck.

Black also scored the game’s final touchdown in the fourth quarter to put the game out of reach. In between Black’s two scores, the Grizzlies’ offense exhibited the kind of balance that figures to make them one of the top Wesco 4A teams in a wild season that began in February instead of August and will not have a postseason.

It’s been over a calendar year since the Grizzlies last played a game, but the long layoff didn’t seem to impact them against the Tomahawks, who figure to have their own share of success this season.

“I think they’re a really good football team,” Glacier Peak head coach Shane Keck said of Marysville Pilchuck. “I think if this was a normal year, that’s a quarterfinal football team in 3A. We just played really well and really tough inside the box and just kind of played the scheme.”

It was a great way for the Grizzlies to start the season as they now prepare to play crosstown rival Snohomish in week two on March 12.

“This is huge,” Black said. “We’ve been getting ready for this game and we’ve all been super excited. It was just a great way to kick off the season and gets us really excited for week two.”

Black’s two touchdowns led the way, but he said after the game that his older brother Iain, who also used to play running back for the Grizzlies, probably would have wanted him to find paydirt a few more times.

“I think he’d think I did alright,” Black said. “He probably wants me to get a few more touchdowns – shout out to Iain.”

Black might have been the star of the game, but he wasn’t alone. The Grizzlies’ offense was balanced throughout the game. Several other players had big runs, and senior quarterback Tyson Lang threw for two touchdowns, ran for another, and perhaps more importantly, didn’t turn the ball over.

“Tyson Lang is a great quarterback,” Keck said. “He’s a preferred walk-on to the University of Washington. He’s a 6-foot-2, 200 pound kid who throws the ball really well. Also, off the field with his maturity, he’s become a great leader. He’s one of the best quarterbacks in our league for sure. We look forward to having him chuck it around for four more games for us.

Keck also had praise for Black and the offensive line.

“We want to be a physical football team, and the way he runs the football does that,” Keck said. “He’s explosive and fast, but we ultimately want to be physical. I think he came out and proved that. He obviously had a great night, but a lot of that credit goes to the offensive line as well.”

There was plenty to rave about on the offensive side of the ball, but the defense was equally impressive for Glacier Peak. The Grizzlies gave up a few long drives to MP on the Tomahawks first two possessions of the game, but kept the Tommies off the scoreboard. GP’s only real mistake of the game came late in the first half when they gave up a long touchdown pass to junior Jordan Velasquez from fellow junior Jace Luton, brother of former MP quarterback and current Jacksonville Jaguars quarterback Jake Luton.

“We didn’t do a lot of stuff on defense,” Keck said. “We just kind of let our kids read and react to what they were doing. I think number five (Dylan Carson) is a heck of a player and number two (Velasquez). We’ve got a lot of respect for them, so we’re real proud of our kids tonight.”

The Tomahawks got the ball first to start the game and held the ball for nearly seven minutes, as they methodically marched down the field, but when the drive finally stalled, momentum changed in a hurry.

After the Tommies turned the ball over on downs, Glacier Peak needed less than two minutes to find the end zone. Black capped off the drive with a 10-yard touchdown run.

“Any time you get a stop after a long drive, it’s special on defense,” Keck said. “You flip it over and we get the ball, and we want to go fast and be physical. We want to go high tempo. Sometimes the momentum goes in our favor because we score so fast after a big defensive stop and you kind of felt the momentum go the other way.”

GP MAKES THE MOST OF ITS POSSESSIONS

It seemed as though the Tomahawks were winning the time of possession battle for most of the game, but the scoreboard told an opposite story. That’s because when the Grizzlies did have the ball, they made the most of it.

“It did feel like we didn’t have the ball that much because I think we were scoring pretty fast,” Keck said. “That’s kind of part of their M.O., they want to control the clock and control the game, but fortunately for us we were able to get some big stops.”

DON’T COUNT OUT THE TOMMIES

While the score may appear lopsided, don’t sleep on the Tomahawks. Marysville Pilchuck is one of the youngest teams in the league and that young talent showed brilliance in moments on Saturday.

Luton will only get better. Velasquez and Carson both looked good at times, and sophomore Gaylen Gray ripped off some nice chunk runs towards the end of the game. It was a rough start for MP, but they will improve as the season goes along. And if things return to normal next season, which is just five months away from starting even though this season has just begun, Marysville Pilchuck is a team to watch when postseason play returns.