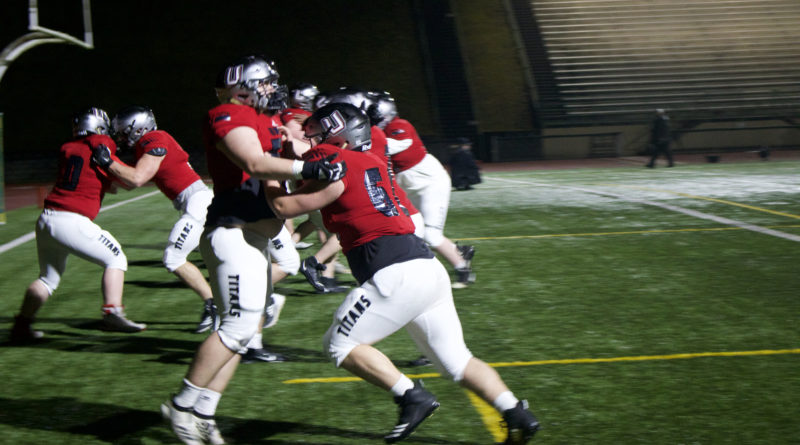 VANCOUVER — Jake Bowen has made a name for himself as a reliable impact player. Never before had his impact been felt like it was Friday.

Bowen had two interceptions and two touchdown catches — a first, he says — as Union (4A) scored 47 unanswered points to beat Mountain View (3A) 60-13 at McKenzie Stadium. The win comes a week after the Titans opened the season by beating defending 4A state champion Camas on the road.

In a season delayed and shortened by a pandemic, many teams have undergone, understandably, slow starts due to lack of conditioning and chemistry without a traditional offseason. Union, which looked like its 4A state title-winning 2018 self, has faced the same circumstances and two weeks into the season, has looked largely immune.

“I think we were already prepared because most of us have been in that position already,” Bowen said.

Mountain View tied the game at 13 apiece after a pair of hard-nosed runs by quarterback Riley McCarthey set up a three-yard score from Zack Gable with 4:44 left in the second half.

Union then proceeded to score two touchdowns, a safety and a field goal before halftime. The Thunder did not score again.

“We started a little slow today, but once we got going, man,” Bowen said, his voice trailing off.

Much has been said about the raw skill and blistering speed the 6-foot-5 Merriweather possesses.

That’s why the junior has every Pac-12 school vying for his talents, and recruiting site 247 Sports identifies him as the 10th ranked receiver in the class of 2022.

But thanks to a bevy of defensive schemes aimed to shut him down, Merriweather only logged three catches for 17 yards in Union season-opening win over Camas in Week 1. Union coach Rory Rosenbach even praised Merriweather in his postgame speech then because of his team-first response to not getting the ball much.

Friday night was a different story. He could tell immediately his matchups were more favorable. After a couple early drops, he found his groove.

Adam Matheison was nearly speechless. In 13 years, he’s hard-pressed to think of games as lopsided as Friday’s.

“These ones are easy to put past you,” Mathieson said. “We haven’t been here before. Hats off to them. Good thing they turned the scoreboard off early, so that means it’s over. We’re onto the next one.”

He lamented the four interceptions, the mountain of total turnovers, and the Thunder’s inability to stop the downhill momentum Union built up from the second quarter on. Especially after the Thunder beat Kelso on the road 37-21 in Week 1.

Part of the Thunder’s struggles were a symptom of the times. McCarthey was a run-first signal-caller in 2019 and as a senior, Mathieson has opened up the playbook a bit for him, in hopes to open up the offense and keep Union on its toes.

“You’re trying to find your team still,” Mathieson said. “Don’t go to team camp, don’t do fall stuff … all coaches are doing that. We feel like we have some weapons in that aspect of the game. We felt like it was a good plan, they do a good job.”

Even against Union’s best teams, the Thunder have always seemed to rise to the occasion. In 2018, the two faced off against one another to open the season. Union and its most talented roster in school history won 17-14, but Mountain View was in position to win in the final moments. Union would go on to run the table and cap a 14-0 season with a 4A state championship. Mountain View reached the 3A state semifinals that year.

“We’re going to watch the film, learn from it,” Mathieson said, “I know that sounds like coach talk, but it really is.”

When Mountain View tried to add another dimension to its offense by airing out the ball, Union was there to spoil the fun.

The Titans’ secondary had three total interceptions — two by Bowen and another by Liam Boyce, which set up a touchdown. Turnovers are never timely, but the first two picks were momentum-crushing.

Bowen was isolated in man coverage when McCarthey tossed a deep ball into the endzone. Bowen elevated, adjusted and made a sound, physical read on the ball to come down with the pick for a touchback.

“I just knew it was just me and him, and if he was going to take a shot, I needed to make a play on it,” Bowen said. “He ran a fade, got my eyes around, saw the ball and got it.”

He wasn’t the only one. After Union went up a touchdown with 2:30 left in the second quarter, Boyce picked McCarthey and returned it to the Thunder 11, setting up a quick strike from Gehrmann (who finished with four touchdown passes in just over a half of play) to Bowen to take a 27-13 lead.

“I’m really proud of our defense, we were lights out today,” Bowen said. “Our coverage was good, run defense was good. We prepared very, very hard throughout the week.”

Rosenbach delivered a cheerful debrief for the second week in a row, validating his group’s 2-0 start — both wins against ranked opponents. But the positive review came with a challenge.

“What you did this week,” Rosenbach said, “you need to repeat that five more times.”

When junior kicker Sonny Pitts blasted a 47-yard field goal through the uprights as time expired in the second quarter, the public address announcer echoed through the empty stadium.

Pitts had notched a program record.

For the second week in a row.

Pitts’ 45-yard field goal late in the first half of Union’s Week 1 win over Camas was in fact a program record, too.

Pitts was in the position to break the record because he proved to coaches he had the range. When Union faced fourth down on its own 30 yard line, with two seconds left in the first half on Friday, coaches called his number.

“The coaches know, they’re confident in me,” Pitts said. “(Rosenbach) knows I can put it out there, put it through. I’m grateful for the chances to be able to hit those.”

Pitts grew up a soccer player, but once he started playing football his dream was to be a tight end. In seventh grade, a coach asked Pitts if he could kick, and he agreed to try. The more he became comfortable with the position, the more he considered a future as a kicker.

“I was like, I could go somewhere with this, I’m pretty good at this,” Pitts said.

He split time as Union’s kicker in 2019, starting the second half of the season. Now, in his first season as a Week 1 starter, Pitts is already smashing his own records.