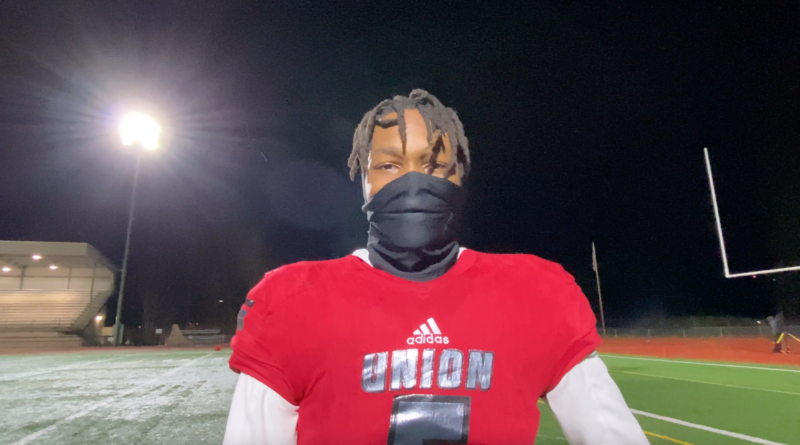 VANCOUVER — Much has been said about the raw skill and blistering speed 6-foot-5 Tobias Merriweather possesses.

That’s why the junior wide receiver has every Pac-12 school vying for his talents, and recruiting site 247 Sports identifies him as the 10th ranked WR in the nation in the class of 2022. On Friday night, Merriweather had his most productive game of the young high school football season in Washington, which is taking place in the later winter and early spring due to pandemic-related postponements. He caught seven passes for 82 yards, which included Union’s first two touchdown catches (5 and 12 yards) in the Titans’ 60-13 win over local rival Mountain View.

Thanks to a bevy of defensive schemes aimed to shut him down, Merriweather only logged three catches for 17 yards in Union’s season-opening win over defending 4A state champ Camas in Week 1. Union coach Rory Rosenbach even praised Merriweather in his Week 1 postgame speech because of his team-first response to not getting many targets.

Friday night was a different story. He could tell immediately his matchups were more favorable. After a couple of early drops, he found his groove.

The junior wideout/defensive back has offers from Notre Dame, Oregon, UCLA, and USC, among others. 247 Sports lists him as a 4-star prospect and the No. 2 overall prospect from the state of Washington in the class of 2022.

Watch Merriweather break down the winter/spring season, his focus on technique in the offseason, as well as his highlights from the Week 2 win: