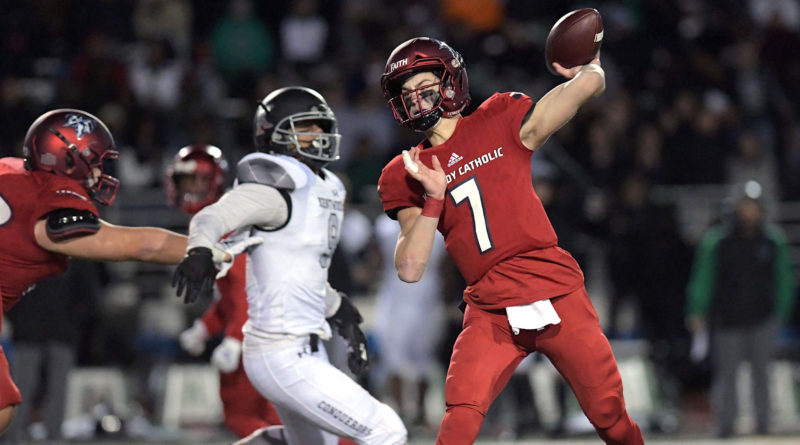 After a pandemic-induced shutdown of the high school sports world, high school football is back across the state of Washington. As leagues around the state begin condensed spring seasons, SBLive took a look at the top returning players statewide, across all classifications.

SBLive Washington is highlighting the top football teams and players in the state throughout the 2020-2021 high school football season. You can find all of our high school football coverage here. And we just launched a free iPhone and Android app for high school sports fans to follow their favorite teams and get the latest news, scores, videos, photos, rankings and more. You can download the new SBLive Sports iPhone app here, and you can download the new SBLive Sports Android app here.

Three years ago, he burst onto the scene as a freshman. Now one of the top-ranked quarterbacks in the country, the Washington signee is gunning for the all-time state passing record.

MCC defenses have one more go at trying to bring down “Big Tuna.” The conference’s offensive player of the year and Eastern Washington-bound back rushed for 1,406 yards and 20 touchdowns as a junior.

Physical, skilled back was a first-team all-state pick by the Associated Press as a sophomore.

Arizona State-bound wideout is a favorite target of Sam Huard, racking up 1,328 receiving yards and 24 touchdowns as a junior.

Two-way all-state choice has ox-like strength, and separates himself as a pass-catcher. Logged 1,357 receiving yards and 22 touchdown catches in Royal’s 1A state title run in 2019.

At 6-5, he’s a blur of speed who has the attention of lots of Power Five college programs, and with improved route-running he’s poised to take an even bigger leap as a junior.

Future Washington Husky has the size of a lineman, strength of a power back and the sure hands of an elite light end. Two-time 2A SPSL MVP and 2A all-state first team selection.

He was 6-5, nearly 300 pounds before his 15th birthday. And the top college football powerhouses vie for his talents as he continues to mature

Speed. Agility. Size. Those are just a few reasons the Rainier Beach standout has the likes of Alabama, Washington and Michigan on his tail.

After missing his sophomore season due to an injury, the highly-touted guard is back as a leader of an imposing Puyallup line.

Elite run-blocker headlines a big, talented O’Dea front and is the state’s top prospect on the line.

Do-it-all athlete is 2B’s most dynamic playmaker. He can pass, he can run and he’s seemingly in on most tackles on defense

A mark of consistency for Mt. Spokane, he’s also the top kicking prospect in the state — fifth in the country — according to kicking guru Chris Sailer.

All about energy and quick burst, this EWU signee is 4A KingCo’s lone returning first-team pass rusher.

Virginia signee tore up 2A Northwest Conference with eye-popping 30 tackles for loss, including 21 sacks.

Loves doing the dirty work, the 2A EvCo MVP racked up 26 tackles for loss for reigning state champions.

A top 2022 prospect, this all-3A Metro Leaguer comes downhill at ball carriers like a screaming locomotive.

Ask Irish coaches who the team’s most complete, consistent player is – and this is the name that comes up.

In a league (4A SPSL) of heavy hitters, he lands the loudest thud on ball carriers who dare to run at him.

A human highlight reel, all-4A Wesco athlete has ball skills to play cornerback, and range to run at free safety.

Arizona signee came into program at linebacker, but drooling athleticism has him playing safety as a senior.

If you like swagger in your cornerback, this is your guy. Only all-4A MCC first-teamer at three positions in 2019.