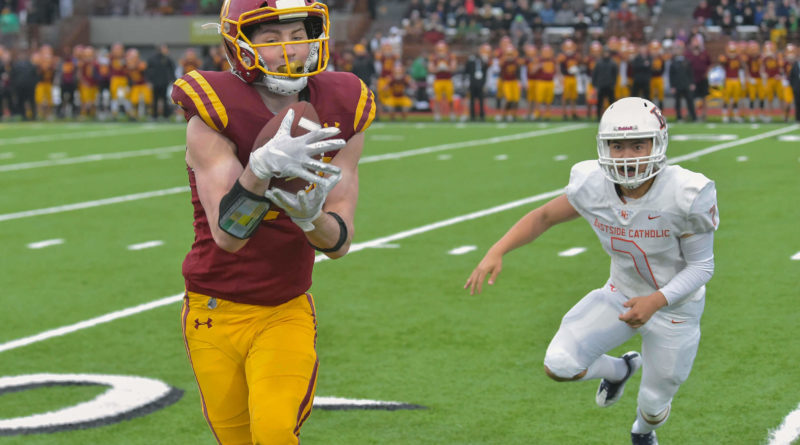 While most of the state has played at least one game, the 3A Metro League is one of several leagues starting its high school football season this week. And across the board, there are matchups galore.

Here is a quick recap of last week’s highlights, as well as week 3 storylines and games to follow:

THREE THINGS WORTH REVISITING FROM WEEK 2

Colton Bower tossed three touchdown passes to lead the Vikings past rival Sequim 28-0. Bower, a Washington State baseball commit, connected with Aiden Fitsemons for all three touchdowns as the Vikings move to 2-0 in the North Olympic League. North Kitsap was SBLive’s No. 10 preseason 2A team.

Aiden Lesser caught 18 passes for 381 yards and two touchdowns, hitting a WIAA 8-man football record for receiving yards in a game and tied the single-game reception record. He passed Pateros’ Carlos Ceniceros, who caught for 373 yards in 2014. Lesser is the younger brother of former Liberty Christian running back John Lesser, who set a national record for career rushing yards during his high school career. Read more here. (Liberty Christian was SBLive’s No. 5 preseason 1B team).

Union beat Camas on the road at Doc Harris Stadium in a Southwest Washington rivalry game that usually is saved for the end of the regular season. Due to the uncertainty of teams’ weekly game schedules during the pandemic, some teams have placed rivalries at the front of the season schedule in order to ensure the top-billed games will take place. The first of those were the 2019 and 2019 4A state champions.

4 OBSERVATIONS | PLAY OF THE GAME

3 OBSERVATIONS | HIGHLIGHTS | PLAY OF THE GAME

PLAY OF THE GAME | HIGHLIGHTS

The first week of Metro League play just so happens to include the game of the year. Eastside Catholic hosts O’Dea in a no-holds-barred rivalry, a rematch of the last two 3A state championships games and a potential game of the year across the state in the first week of games in Seattle. Both of the 2019 matchups were instant classics. First, O’Dea ended nationally-ranked Eastside Catholic’s 18-game win streak with a 28-6 thumping, a win head coach Monte Kohler called the biggest of his 34-year career. The Crusaders bit back when it counted, beating O’Dea 20-12 in the 3A state title. Eastside Catholic is the two-time defending 3A state champ and has won four of the last six titles.

“I have so much respect for Monte (Kohler) and what he does, and the level of consistency he has year in and year out is a benefit for him in this case because he has a system, a culture that breeds itself,” Eastside Catholic coach Dom Daste said.

Forks a 2B buzzsaw?

First, they took defending 2B champ Onalaska to overtime, and lost. Then, they walloped Pe Ell/Willipa Valley behind four rushing touchdowns from fullback Hayden Baker. Now? A formidable Forks team matches up against Napavine, SBLive’s preseason No. 1 2B team. There’s hardly a week off in the Central 2B.

It’s been a fascinating thought experiment that could have gone untested — how would defending 1A state champion and consensus 1A favorite Royal fare against bigger schools? After opting for a localized schedule, we’ll get an answer, as the Knights open the season against Eastmont, a 4A team that went 9-2 and reached the 4A playoffs in 2019. Royal is SBLive’s No. 30 preseason team in the state across all classifications.

When Black Hills was sidelined due to COVID-19 protocols, defending 2A state champion Tumwater went into scramble mode. Similar to how Puyallup and Lakes played one another Saturday in a COVID cancelation scheduling game of musical chairs, The T-Birds have spent the week scrambling to fill a game, hoping opportunity would meet desire.

On Thursday, Prosser agreed to host the T-Birds at Art Fiker Stadium at 1:30 p.m. Saturday, setting the table for a blockbuster matchup between 2A powers in different parts of the state. Behind quarterback Kaiden Rivera and wideout Haden Hicks, the Mustangs (2-0) are off to a terrific start.

Here is the full backstory of how the game came to be.

Skinny: Eastside Catholic is the two-time defending state champ — both wins over O’Dea. This year, the Fighting Irish are the favorites.

Skinny: Two top-tier Wesco teams square off against one another to open the season.

Skinny: Proven 4A winner squares off with the overwhelming 1A favorite.