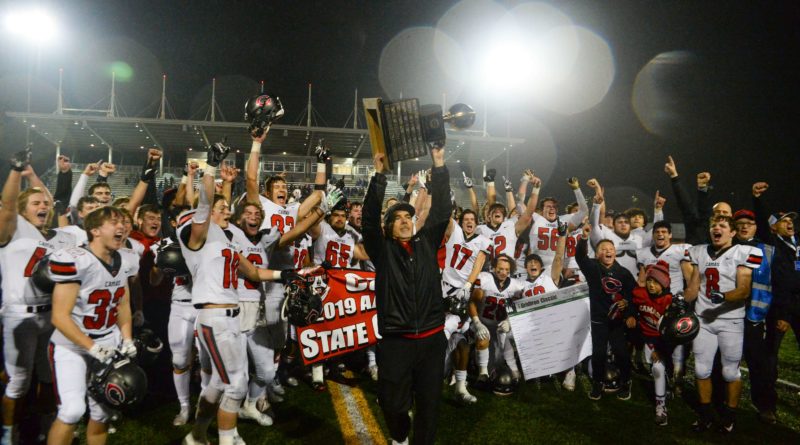 SBLive Washington is previewing the Top 50 high school football teams in the state. Here’s an inside look at the Camas Papermakers of the 4A Greater St. Helens League – No. 2 in our countdown.

Was going to be part of the running-back rotation anyway, but now with Jacques Badolato-Birdsel injury, he’s the guy.

Really the lone big-man standout returning for the 4A champions; he will man both interior positions (DT, NG).

Early in 2020, the COVID-19 pandemic arrived before the Papermakers’ state championship rings.

So, Camas coach Jon Eagle told his players they could stop by his house and pick them up on the front porch.

“Thirty players showed up,” Eagle said. “And they all got together with their rings on, took a photo – and then posted it.”

From a culture – and success – standpoint, few programs in the state rival what Eagle has built in Southwest Washington at Camas.

Those are reasons enough to never bet against Eagle’s teams – even in what is perceived as a retooling year.

“The vibe in our room has been good,” Eagle said.

But Camas graduated its entire offensive line – one of the best the state has seen in decades. Its next wave of talent up front is in the class of 2023.

It graduated all of its top wide receivers – and quarterback Blake Asciutto, who came on for the injured Jake Blair late in the regular season to lead the offense. It also bid goodbye to all-purpose standout back Tyler Forner.

Jacques Badolato-Birdsell, one of the state’s top running backs, was set to be a centerpiece of the offense this shortened senior season, but the Nevada signee suffered a season-ending knee injury during a workout in early January.

That leaves Blair as truly the only proven commodity. It will take time for this new offensive cast to grow together (the Papermakers scored just one touchdown in a season-opening loss to Union).

That is why Eagle might have to rely on his defense in the early going, particularly a strong defensive front, led by Robert Silva and Quaid Milholin, and a trio of junior linebackers – two of whom started in the 4A title game (Luke Jamison, Luke Silva).

“It is one of the better defensive fronts we’ve had,” Eagle said.

One thing that should never be underestimated is Eagle’s ability to put Camas on a championship track very decisively.

“We should be very competitive. We have a strong underclass group,” Eagle said.

“We’ve been off our normal schedule, but there is value in that – learn how to manage and adjust. We look for solutions, not excuses.” – Jon Eagle