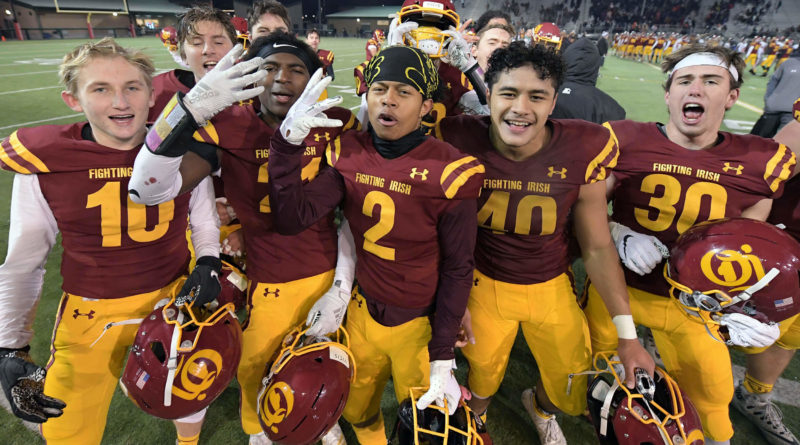 SBLive Washington is previewing the Top 50 high school football teams in the state. Here’s an inside look at the O’Dea Fighting Irish of the 3A Metro League – No. 1 in our countdown.

Hulking presence was a force at guard as a sophomore and has a Pac-12 future.

Coaches heap praise on him as an invaluable presence, leader in the center of a great defense.

The state’s top O-line prospect will take his talents to Washington after one more run with a group he’s helped lead for several years. Tabbed as an All-American by several national outlets in 2019.

A year ago, O’Dea strung together what was likely one of Monte Kohler’s best teams to not win a state title.

The Fighting Irish beat nationally-ranked Eastside Catholic in a regular season road game, in what Kohler called at the time the biggest win of his career. And they went toe-to-toe again with the talent-laden Crusaders in the 3A state title game, losing 20-12.

This year, O’Dea enters as the overwhelming favorite, regardless of classification.

“It’s a great group, they’ve got a lot of pride,” Kohler said. “They’ll only get better as we (get more time together).”

What’s scarier, is the experience the Fighting Irish retain. They dressed a relatively low number of seniors (19) in the 2019 state title game (for comparison, the 2018 team had 34 seniors).

When O’Dea was at its best, it was controlling games from the line of scrimmage, running meticulous drives. The bulk of the experience comes on the O-line, where the Fighting Irish return Washington-bound Owen Prentice, the state’s highest-rate lineman, as well as 300-pound junior O-tackle Mark Nabou and all-league center Sam Hough, to name a few.

One of the more impressive offseason developments, Kohler said, was of quarterback Milton Hopkins Jr. As the team’s quarterback, Hopkins Jr. ran the offense soundly, with some of his best moments coming against the team’s toughest opponents.

At 6-foot-5 and 220 pounds, he’s a physical specimen and will be utilized as such on defense this year. He played some D-line and linebacker as a sophomore and junior, and expects to see his role on that side of the ball increase.

He’s committed to Washington as a preferred walk-on, not at one position in particular.

But Kohler was most impressed with how much he’s grown as a person, and how that’s aided his ability to find himself as a leader off the field. In the offseason, Hopkins Jr. organized and ran 7-on-7 tournaments with dozens of schools from the west side of the state, in order to give kids an outlet during pandemic-induced shutdowns.

There isn’t much weakness on paper with O’Dea, and with the winningest active head coach in charge, the Fighting Irish have the potential to run the table.