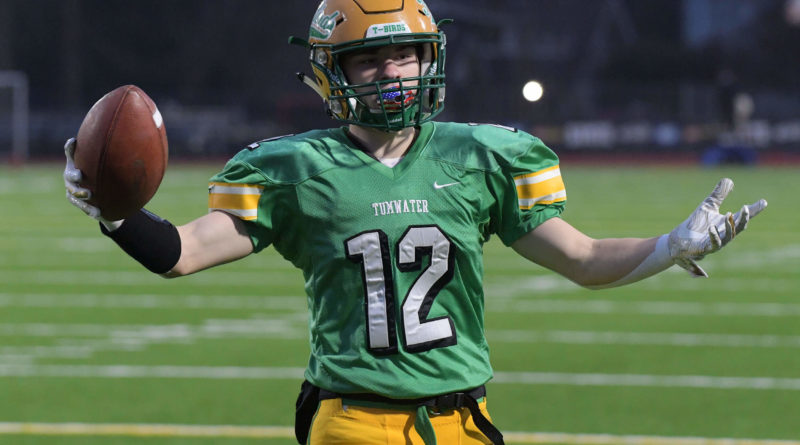 When Bill Beattie received the news, the Tumwater coach had only a few moments to breathe a big sigh of relief.

Beattie received word early Thursday afternoon that his Thunderbirds’ showdown against Prosser was officially going to happen, culminating a days-long scramble to fill a hole in their schedule after their Week 3 opponent canceled due to COVID protocols.

Now, the Tumwater and Prosser coaching staffs are in scramble mode to formulate game plans with two days notice.

Prosser (2-0) will host Tumwater (3-0) on Saturday at 1:30 p.m. at Art Fike Stadium in a blockbuster nonleague matchup between 2A powers. The game comes with a caveat for the Mustangs. In agreeing to host the defending 2A state champions, Prosser will play two games less than 24 hours apart. The Mustangs play 2A Central Washington Athletic Conference opponent Grandview on the road on Friday night.

That the cross-state game came together on short notice, in a year where COVID protocols limit teams to localized schedules with minimal travel, underscores just how fragile schedules are in the state of Washington’s COVID-condensed winter/spring football season.

In this case, the volatility worked out favorably for both sides. And Tumwater was willing to drive four hours each way to make sure of it.

“This actually is almost starting to become par for the course during this COVID season,” Beattie said. “It’s unbelievable how things change, and in this case it’s a change for the positive.”

Tumwater took to social media over the weekend to get word out that it was looking for an opponent — and willing to travel. Prosser coach Corey Ingvalson was leaving a coaches meeting on Sunday to start his prep for Grandview when one of his players alerted him to Tumwater’s situation. Ingvalson reached out to his athletic director to express interest. Then he waited, for days.

Once the schools got in touch, Tumwater still needed approval to travel. Over the course of the week, athletic director Tim Graham met with Tumwater administration, school district brass and, finally, an athletics liaison to the school board, who gave approval on Wednesday.

“It was quite extensive, it was like peeling the onion away, in order to get to the actual game in the middle there were a lot of steps that had to be gone through and involved,” Beattie said.

The last-ditch blockbuster matchup isn’t the first to come out of the shortened season. Last week, Puyallup and Lakes played one another on short notice after both schools’ Week 2 opponents canceled due to COVID protocols.

Tumwater already lost the second game on its schedule after Centralia had to forfeit because it didn’t have enough eligible players to play. That gave coaches more urgency to make sure the players wouldn’t miss another game.

“A lot of tradition between our two programs going back to the 90s,” Ingvalson said. “Super excited, they’re the cream of the crop, defending 2A state champ. We just want to see where we measure up. We’re incredibly blessed and excited to get it done.”

Tumwater will hit the road on Saturday morning on two charter buses with around 28 players on each bus — one per row. The team will stop at a rest stop near Selah, where Beattie says they will probably get dressed for the game because of no locker room access at Prosser.

Over the last year, Beattie has had to relay to his players what’s felt like a revolving door of bad news with the cancelations of spring, summer, the postponement of the fall season and a host of practice restrictions, which made Thursday’s news all the more sweet.

“It was so exciting. Since last March it’s been a roller coaster,” Beattie said. “Every time you thing you’re going to do something it gets thrown out. To lose another game … then to be able to say we’ve got a game, they were fired up.”

Ingvalson thinks it’s the first time in program history the team will have played games on consecutive days. The Prosser coach deflected any concerns about the player safety with the quick turnaround.

“It was the mindset of ‘hey, if we have the opportunity to play two games in one week, would we take it? Without a doubt in a shortened season,’ ” he said. “We didn’t really look at the negatives as such as we were trying to look at the positives and see if we could do it. We feel we have the guys in the program to be able to balance it and play a competitive game on both Friday and Saturday.”

The closest example he could recall was a Saturday tiebreaker two days after a Thursday game.

“We’re excited to make some history in our proud program and have Tumwater there with us,” Ingvalson said.