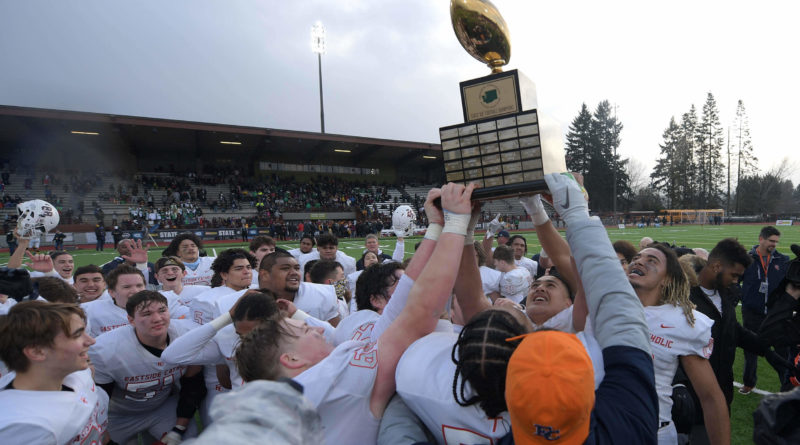 SBLive Washington is previewing the Top 50 high school football teams in the state. Here’s an inside look at the Eastside Catholic Crusaders of the 3A Metro League – No. 5 in our countdown.

Smart, agile presence in the center of Eastside Catholic’s defense as a sophomore got Pac-12 schools’ attention. Now, the 4-star returns bigger, better.

In a jump-started season, a little bit of cool under center is a bonus. That’s what the Navy signee, transfer from Hawaii — whose laid-back demeanor Daste likens to Spicoli from Fast Times at Ridgemont High — brings as a second-year starter.

He’s regarded by some as the No. 1 ranked 2021 recruit for a reason. Can do anything he’s asked — including catching the game-winning touchdown in the state title with one hand.

When Dominic Daste looks at his game plan for the 2019 3A state championship game, he can’t make sense of it. Enough time has passed to where he can’t replicate his headspace from the week of preparation, and the details are fuzzy. But when he rolls the film, and watches his Crusaders avenge O’Dea with a back-and-forth nail-biter to clinch a second-straight title, his memories are clear.

Even with a trove of star talent, the 2019 Crusaders proved they weren’t going to be knocked down a peg under a first-year head coach.

But how does a team that won four of the last six 3A state championships approach a shortened season with no postseason or state title to defend?

Trophy or not, the motivator is the same.

“Winning,” Daste said. “It’s no mystery. When we step on the field we want to win every single game. We’re going to go compete, it’s our DNA. Whether it’s a state championship, bragging rights, we want to win and play well.”

The 2019 Crusaders’ offense raised eyebrows. With future Cal and Ohio State receivers out wide and a University of Washington RB in its backfield, how could it not?

These Crusaders, however, will be tricky to score on under new defensive coordinator Marcus Ungero, who as recently as 2019 was a coach with the New Orleans Saints. He inherits six returning starters — nine who logged a significant amount of snaps.

On offense, there are big shoes to fill in place of the likes of Gee Scott Jr., DJ Rogers, Sam Adams II and Gio Ursino. Young talents like freshman running back Unterrio Henley and junior back Chase Hamden will have opportunities to prove themselves.

The Crusaders will experience a baptism-by-fire in the form of a Week 1 3A title rematch with O’Dea. The trophy will stay at Eastside Catholic no matter the outcome of the matchup. But pride goes a long way in the heated powerhouse private school rivalry.

“There’s no question we have to have some kids progress at a very fast pace, kids put into action that aren’t exactly ready,” Daste said. “Regardless of identity, in terms of what we look like, I think regardless of who we are we want to be physical, sound and play smart football.”

The toll it’s taken on people, all football aside, we’ve had family members who have contracted COVID, folks who have lost their jobs, homes. We’re not unique but it strikes close to home when it’s in your back yard. We’ve tried to support kids/families as best as they can because they’re going through tough times. It takes a toll on a kid. Being isolated for months at a time is not a great situation. For me, for this program, we’ve tried to stick together as a family and support each other.” —Dominic Daste