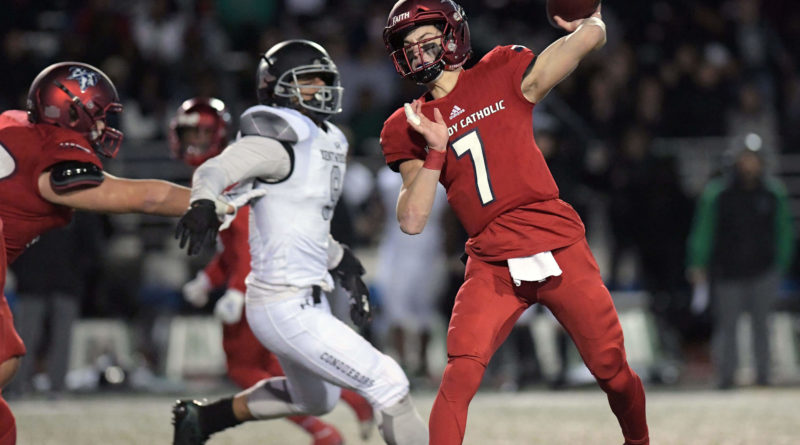 SBLive Washington is previewing the Top 50 high school football teams in the state. Here’s an inside look at the Kennedy Catholic Lancers of the 4A NPSL – No. 4 in our countdown.

11-1 (first place in 4A NPSL Mountain); lost to Woodinville in 4A quarterfinals.

On a unit with blue-chip athletes everywhere, this Eastern Washington signee is the steady, calming influence in the huddle.

They came in as a pack, but he is leaving as the most dominant outside pass-catcher this program has ever had.

Gaudy statistics aside, he will go down as one of the most advanced, quickest-processing quarterbacks in history.

Years from now, folks will look back and remember how COVID-19 wiped away the WIAA championship pursuits of select programs in 2020-21.

Including the talent-rich Lancers.

After dominating the regular season last season, this Sam Huard-led group ran into the worst possible matchup in the state playoffs – defensive-sound Woodinville, which won a 55-42 quarterfinal shootout after breaking out to a four-touchdown advantage in the first half.

Now, with no postseason on the horizon, this nucleus of 11 college-bound seniors, including five Pacific-12 Conference signees (Huard, WR Jabez Tinae and OL Jaydn McWilliams at UW; WR Junior Alexander at ASU; WR Reed Shumpert at WSU), will have six more games together before moving on.

Yet, there are still reasons to stay tuned – with playmaking buzz at the top of the list.

Huard sits at 11,741 yards (No. 4 all-time) and 132 passing touchdowns (No. 5 all-time) for his career – and has his sights on the top mark of 13,044 yds, set by Shadle Park graduate and current Denver Broncos quarterback Brett Rypien. The Lancers will give him every opportunity to break that record (and who knows, maybe Kellen Moore’s top-spot 173 passing touchdowns from 2006 can be touched, too).

In any case, records or not, Huard will go down as an all-time great in Washington.

“So many quarterbacks are good at this or that – good arm, or can run – but Sam has a vision for himself, and a stubbornness to stay locked into his mission,” Kennedy Catholic coach Sheldon Cross said. “And when you are on a mission that is so important, every day he wakes up hungry for it.”

With Steilacoom’s Emeka Egbuka gone to Ohio State, Alexander inherits the best-receiver-in-the-state label – and many would argue the all-state standout hauls in passes at their apex better than anybody around, regardless. He had 24 touchdown receptions a season ago.

Every time Huard drops back, he has the luxury of picking and choosing among the best set of receivers in the state with Alexander, Tinae and Shumpert – and look out for new starting running back Leland Ward.

“It is a high-execution offense,” Cross said. “That is the standard.”

Lesser-known names are on defense, but it was a until that took a huge step forward in 2019, especially against the run.

Middle linebacker Shane Aleaga, a three-year starter, controls everything. But Cross points out that free safety Isaiah Malloe, sone of UW co-defensive coordinator Ikaika Malloe, is the Lancers’ most cerebral player on that side of the ball, and is ready for a breakout season.

“We’re better than last year’s team because … it is a year older,” Cross said. “Sam is better. Junior is better. Reed is better. Everyone is better.”

“These young people are resilient. These players stayed in the fight. These kids are living proof that when adversity hits, you can keep on having faith despite all that negativity.” – Sheldon Cross