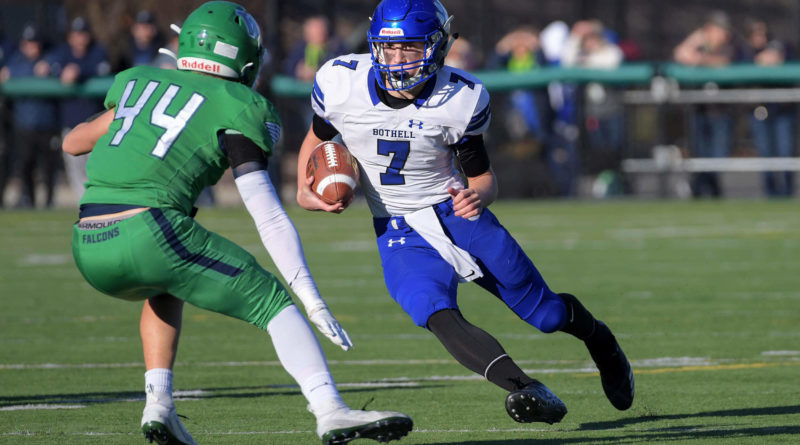 SBLive Washington is previewing the Top 50 high school football teams in the state ahead of the 2020-2021 season. Here’s an inside look at the Bothell Cougars of the 4A KingCo – No. 8 in our countdown.

Everyone knows this Eastern Washington signee is a wide-side pass-rushing terror, but he is formidable against the run, too.

Bothell’s next great lineman, this quick-rising Power 5 recruit is extremely fast getting to second blocking level.

After a 1-2 start early in 2019, “Blue Train” could have been headed for a disastrous derailment.

But that is not usually how longtime coach Tom Bainter’s travel mode usually works. So, the Cougars got rolling by winning nine consecutive games and reaching the 4A title game for the second time in six seasons (won it in 2014).

With experience at quarterback (Andrew Sirmon) and along both lines, the Cougars and their 18 seniors are poised to make more noise this season as one of the 4A KingCo’s top teams – despite not seeing each other for nearly 15 months.

“We get as much out of the spring and summer as anybody across the state,” said Bainter, who sits ninth among active coaches with 195 career wins. “Everybody plays a little bit better because they don’t want to let one another down.”

And he utilized the long offseason to build himself up physically, filling out 30 pounds and noticeably improving his arm strength. He was also a finalist at the prestigious Northwest 9 combine last fall.

“He’s been doing everything you’d want a player to do with this (down) time,” Bainter said. “He is a different kid, for sure.”

All juniors, the receiving corps will be led by different faces – but ones with enormous size and talent. They are Marcus Heffernan, Sammy Stewart and Jimmy Tucker.

Rarely do you have three starters along the defensive line who are all going to play in college – but Bothell has that, led by Gabe Johnson, who has one of the quickest steps off the snap you will find. Basketball-first Malik Said emerged on the interior, and Luka Vincic will likely land in a big college conference at offensive tackle.

“It’s a six-week season, and we need to do this for our seniors,” Bainter said.

“It has prevented our team from working out together (our district has not allowed our athletes in the building at all). Some athletes are slightly prepared through self-training and conditioning – and others are unprepared physically. Everything that we normally do has been limited to Zoom meetings.” –Tom Bainter