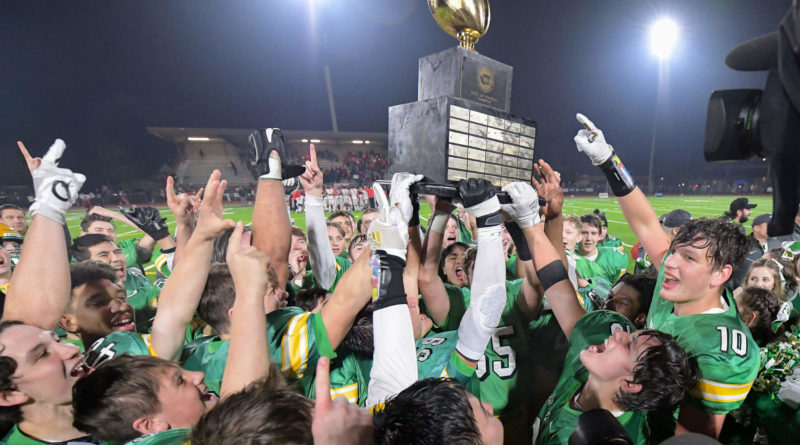 SBLive Washington is previewing the Top 50 high school football teams in the state. Here’s an inside look at the Tumwater Thunderbirds of the 2A Evergreen Conference – No. 6 in our countdown.

14-0 (first place in 2A EvCo); won 2A state championship over Steilacoom.

Having an elite defensive line helps, but this all-state performer has shutdown pass-game coverage skills, too.

He is trimmer, quicker and, without question, the state’s best interior defender behind five-star J.T. Tuimoloau.

Deserves more credit for giving Thunderbirds’ Wing-T offense a quality passing element it has lacked in the past.

Based on some of the historic numbers the Thunderbirds put up against Class 2A competition last season, it is pretty safe to assume they would have been a handful in the bigger classifications as well.

What separates them from essentially any other 2A program is the generational talent and experience they have along both lines.

“This has the potential to be as talented a team as there has been around here,” Tumwater coach Bill Beattie said. “But we will see. On paper, it is exciting to look at.”

Schuster, a University of Minnesota signee, is a two-way headliner – at right tackle on offense, and everywhere along the defensive line. He lost 10 pounds, but his strength numbers are up. And he has added noticeable burst.

Ryan Otton and Austin Terry will continue to pair up at tight end and defensive end. Both are high-ceiling college prospects as juniors (and very few 2022 prospects statewide have seen their recruiting stock increase as much as Otton).

Cooper Wall, the unsung all-state defensive lineman, will shift over to left tackle, giving the Thunderbirds four seniors along the offensive line.

“We also have six or seven young guys we’d like to mix in as well,” Beattie said.

Last season, the centerpiece of the offense was all-state running back Dylan Paine, now at Washington State. Even though the Thunderbirds have a host of good running backs, led by Turner Allen and Jack Jones, it will be senior quarterback Cody Whalen who will see an uptick in workload, especially as a rusher.

“You cannot substitute the big-time experience he has,” Beattie said.

For the most part in league games, Tumwater will feature a wave of different lineups – to honor its seniors but to also peek at what the fall lineup might look like as well. That will feature a pair of Whalen’s potential replacements at quarterback – sophomores Luke Reid and Alex Overbay, the son of former major leaguer Lyle Overbay.

“The biggest area of concern is just staying the course,” Beattie said. “There is no history for this team in 2020-21. The biggest thing is trying to get these kids to stay focused and not living in the past.”

“Like for everyone else, it has been quite a change. The strength training/conditioning aspect has been the toughest for players to be consistent with. I think everyone is tired of Zoom meetings.” – Bill Beattie