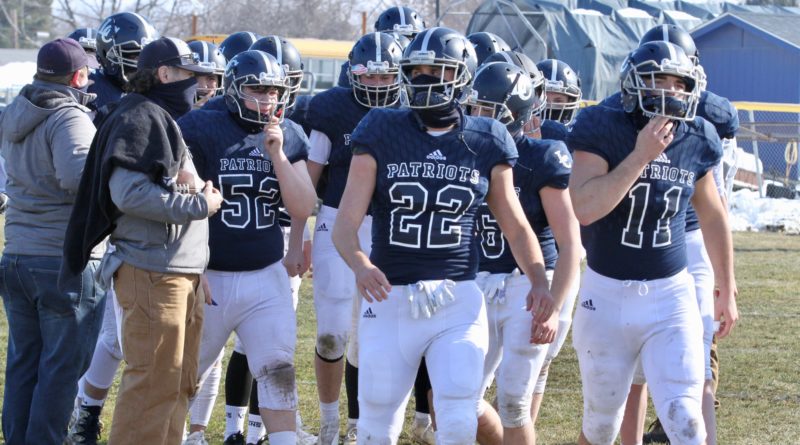 It’s not the easiest thing growing up in the same household as one of the best eight-man high school football players in history.

And chances were that Liberty Christian senior Aiden Lesser wasn’t going to eclipse the WIAA rushing records set by his older brother, John.

But he did join him atop a different record-setting list Friday night.

Against DeSales, Lesser exploded for a career night – 18 catches for 381 yards and two touchdowns in a 64-28 Liberty Christian victory.

His 381 yards is a new WIAA single-game, eight-man mark, breaking the previous record of Pateros’ standout Carlos Ceniceros, who had 373 in 2014.

And Lesser’s 18 receptions tied the single-game record set by Colton’s Brady Chadwick in 2015.

“Aiden has grown up in the shadow of his brother – one of the best ever,” Liberty Christian football coach Craig Lukins said. “John was a quarterback and running back for us, and that is why Aiden wanted to be a wide receiver.”

By the time John Lesser left Liberty Christian in 2015, his 9,019 career rushing yards were not only a runaway WIAA record, but a national mark as well. He is now in his senior season at Eastern Oregon University.

By the time Aiden Lesser arrived at the Richland-based high school in 2017, the Patriots had moved up to the 11-man Class 2B ranks.

“Honestly, I thought I’d be more of a defensive guy because I love to hit people,” Lesser said. “John was beefier of the two of us … so I was not fit for running back.”

Lesser broke his collarbone right before his sophomore season began, returned for one game but then saw his season end with a broken leg.

Last season, he rebounded for 78 catches, 1,184 yards and 10 touchdown as a junior during the school’s final season in 11-man football.

Early in the COVID-19 shutdown, Lesser and the receiving corps, and sophomore quarterback Keegan Bishop met three times a week at Badger Mountain Park in Richland for throw-and-catch sessions. And over the past six months, after Bishop starting working with former Hanford football coach Brett Jay, Lesser would join them on Sundays to run routes and catch passes.

“We trust each other,” Lesser said.

On Friday, Lesser had a 90-yard touchdown reception early in the game, and did most of his damage on seam routes in the first half.

“He is not incredibly fast,” Lukins said. “He has great route-running ability and, more importantly, he has a feel for what the defense is giving him.”

After the game, the on-field statistician told coaches that Lesser finished with 350 receiving yards. Lukins decided to verify the number himself, and saw a slight increase in the total after reviewing the game film.

“Yesterday at our team film study, (Lukins) said he re-evaluated it and had me at 372,” Lesser said.

An assistant coach did a final film review later Monday night, and came up with 381. The two coaches compared tabulations – and concluded 381 was the correct total.

Lukins revealed news about the state record on Twitter on Monday night – but Lesser was not aware of it until Tuesday morning.

“I was expecting to have a good season, but not with these types of numbers,” said Lesser, who will likely join the Whitworth College team next fall. “It’s like playing a video game.”