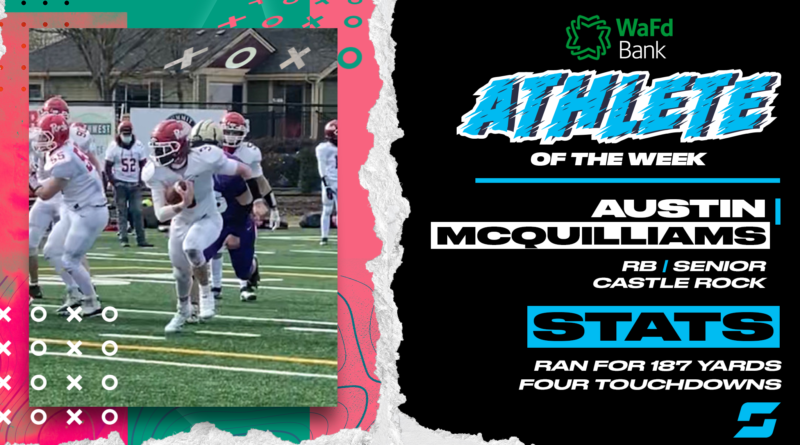 McQuilliams ran for 187 yards and four total touchdowns – three rushing and a fumble recovery for a TD — in a 52-13 win over Golden Dale, reports The Columbian.

McQuilliams received 51.26% of the vote, beating out Graham-Kapowsin’s Jalen Davenport who finished second with 28.79%. Puyallup’s Ziere Ford finished third with 10.96%.

Jalen Davenport, Graham-Kapowsin: Rushed for 111 yards and a touchdown in a 27-0 win over Bellarmine Prep.

Laythan Demarest, Napavine: Rushed for 236 yards on 27 carries and passed for 75 more with three total touchdowns in a back-and-forth win over Kalama.

Ziere Ford, Puyallup: Turned 22 carries into 195 yards and five total touchdowns (four rushing, one receiving) in a 46-18 win over Bethel.

Gavin Fugate, W.F. West: Threw for four touchdowns in 199 yards on 15 of 21 passes completed in a win over Rochester, reports The Centralia Chronicle.

Marshall Haight, Onalaska: Rushed for 147 yards on 37 carries and a touchdown in an overtime win over Forks, reports The Centralia Chronicle.

Dempsy James, Spanaway Lake: Completed 16 of his 29 passes for 213 yards and three touchdowns in a statement 34-7 win over Lincoln.

Tom Lambert, La Center: Threw for 373 yards and seven touchdowns in a 58-0 win over Fort Vancouver, per The Columbian.

Jarod Oldham, Hockinson: Sophomore tossed for 259 yards and five touchdowns in his first start as a sophomore to help Hockinson beat R.A. Long 56-0, reports The Columbian.

Sean Roewedder, Yelm: Scored touchdowns runs of 65 and 17 yards and made key plays on defense in a 31-7 win over Olympia.

Noah Weaver, Tacoma Baptist: Scored on a 55-yard interception return to put the Crusaders on the board in a 46-14 win over Muckleshoot Tribal.

Aiden Weist, Mossyrock: Scored four touchdowns, three passing and another rushing in a 38-8 win over Ocosta, per The Centralia Chronicle.