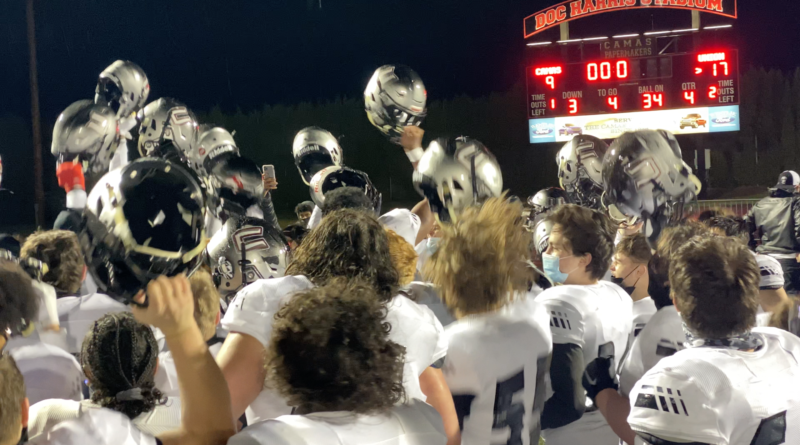 CAMAS — Down go the defending 4A state champions.

Fifteen months after the Camas Papermakers hoisted the WIAA trophy, Union put forth the suffocating defensive effort in a 17-9 win at Camas’ Doc Harris Stadium on Friday night in a rivalry matchup between the last two 4A state title winners.

“Any time you come into Doc Harris and get a dub, you feel really, really good,” Union coach Rory Rosenbach said.

Doc Harris Stadium, typically home to a raucous sold out show, was a shell of itself. A small group of parents was relegated to the parking lot, smoker grills were turned off and, save for the band and the cheer squad, the environment was dull in comparison. Play reflected that for about a quarter and a half, with both teams giving up early penalties and bobbled snaps. But the speed bumps were to be expected.

Of all the rust that is to be expected after a 15-month break, it’s the parts you can’t simulate, like form tackling at game speed, that are the most excusable.

But the Union defense was sound from the jump and forced a turnover on downs or punt on seven of Camas’ 10 drives. The Titans sacked Blair several times and got pressure to him early and often. It was a far cry from the last time Union stepped foot into Doc Harris Stadium in November 2019 and was man-handled at the line.

“Last year, that put a chip on our shoulder,” Union DL Jack Grimsted said. “We wanted to be better than them. We saw them and said ‘that’s the standard, we need to be better.’ ”

Said Rosenbach: “Our defense was lights out,” Rosenbach said.

Standout receiver Tobias Merriweather was a big part of Union’s offensive strategy. Turns out, Camas had put just as most defensive focus on the nation’s No. 10-ranked receiver in the class of 2021 (per 247 Sports).

The 6-foot-5, 190-pound lightning-fast Merriweather had just one catch at halftime and finished with two receptions for 18 yards.

Rosenbach pulled him aside at halftime to explain what coaches were seeing from the defense, and why that translated into fewer targets.

“He said ‘I’m good, I don’t care. Look at the scoreboard. We’re winning,’ ” Rosenbach told his team after the game. “That’s what I’m talking about right there. Does he want the ball? Of course he does. He’s also smart enoungh to understand what’s happening right there versus him … that’s the kind of selflessness we need to have.”

Camas defensive coordinator Dan Kielty took away Merriweather when he lined up on the outside, which didn’t come as a surprise to the Union staff. But when he was rotated into the slot on the inside, the star receiver couldn’t find space. Everywhere he turned, a defender was on him.

“Hats off to Kielty,” Rosenbach said. “We had a hard time finding spots for him to catch it because they always had bodies on him, they didn’t let him get free releases, ever.”

Merriweather’s response to Rosenbach was clear. If that’s what they’re going to do, he told his coach, other guys are going to eat, like senior receiver Jake Bowen, who finished with 78 yards receiving on four catches and had a 45-yard catch to set up Union’s first touchdown.

“That means so much to me when you have guys that get that,” Rosenbach said. “We had a huge plan for him. It shows the character he has and shows his upbringing, he’s just a great kid.”

Papermakers will go as far as Blair takes them

After 15 months of offseason, the loss of a star running back and a rather sudden restart with two weeks of practice leading up to the season, treating Camas’ lackluster opener as some sort of season obituary wouldn’t be fair.

After all, the Papermakers fielded a lot of new bodies, and adjusting to the varsity level takes time.

But what was clear on Friday night was Blair, an Oregon State signee, is the Papermakers’ bellwether on the field. It’s been known he’s the unimpeachable leader of the team off the field, as exemplified by holding positional lifts in his garage throughout the offseason. Blair’s bigger — up to around 195 pounds — and it shows. He completed 12 of his 22 passes with an all-new crop of receivers, and ran 17 times for 27 yards.

And the tough start to the Papermakers’ season featured a moment worth revisiting.

With the clock winding down in the second quarter, Camas reached the 50-yard line with hopes to put more points on the board before the break. Blair rolled out to his left and threw a dart in between four Union defenders to Zach Blair, Jake’s younger brother, for a 25-yard gain. Zach Blair, an Oregon State baseball commit, made his first start as a sophomore – underclassmen starting at Camas is somewhat of a rarity – and caught two passes for 29 yards.

Union pulled off a rarity — handing Camas a home loss

Not many times in Jon Eagle’s 13-year tenure have the Papermakers lost at Doc Harris Stadium.

In fact, Eagle’s memory of each specific loss might be sharper, considering he likely can count them on one hand.

There’s no question the rivalry was dampened by the lack of a home environment. Driving up to a Union-Camas game means seeing a full parking lot with parked cars lining several blocks of NE Ione street snaking up to the stadium.

And the game felt more like two teams re-remembering how to play tackle football at a high level again than a top-billing rivalry showdown of old.

Union QB Alex Gehrmann zoomed with Lincoln Victor, Washington State receiver and 2018 4A state player of the year, several times this week in preparation for his first season-opening start.

Gehrmann backed up Victor in 2018, and served as CJ Jordan’s backup last season, though he started half the season when Jordan was injured. Victor’s advice was simple: Take what the defense gives you.

“At the beginning he was a little excited, trying to force some things,” Rosenbach said. “In the second quarter you started seeing him checking it down to the back, and doing those things and that opened up some intermediate stuff later on.”

Merriweather caught a ball over the middle in the third quarter, and Gehrmann sealed the game with a 21-yard pass to Jake Bowen with under a minute left.

“Once he kind of got the jitters out, he was back to his old Alex, and everything was good,” Rosenbach said.