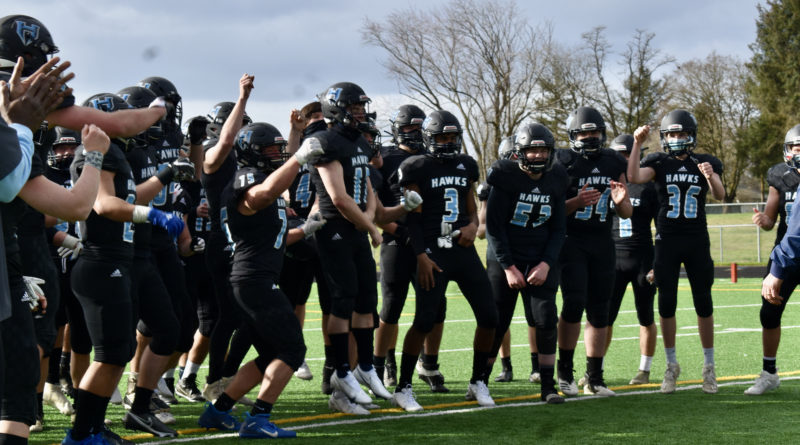 BATTLE GROUND — Lightning struck twice for Hockinson on Saturday afternoon, in the form of consecutive special teams and defensive touchdowns.

Junior receiver/defensive back Andre Northrup returned a kickoff 100 yards to the house and scored on a pick-six minutes later to help Hockinson (2-0) build its lead in a 27-3 win over Woodland (0-2) at District Stadium in 2A Greater St. Helens League play.

Neither offense recorded a touchdown in the first half. After a low-scoring first quarter, Hockinson’s typically high-scoring Josh Racanelli-orchestrated offense looked to the other units to get it going.

‘We came out a little bit flat, something had to spark, and that did it,” Northrup said. “We came out flying in the second half.”

Just when you thought it would be an impossibility replacing 2A state player of the year Canon Racanelli, there came his cousin, Levi Crum, helping the Hawks repeat as state champions as a junior in 2018, then putting forth an all-state senior season.

With Crum gone, Hockinson coaches looked down its depth chart at the next man up. (also, a well-regarded quarterback moved in from out-of-state, but didn’t end up playing football.)

Up stepped sophomore Jarod Oldham, who impressed Hockinson coaches as their ninth grade JV quarterback in 2019. He was one of many newcomers looking to continue the excellence Hockinson has established in recent years. The Hawks are 68-7 over the last six years with 2A state championships in 2017 and 2018.

(Former state player of the year Sawyer Racanelli, now a freshman receiver at Washington, was on the sidelines supporting the Hawks on Saturday.)

In his debut, Oldham threw for 259 yards and five touchdowns in a blowout win over R.A. Long. On Saturday, Woodward sent pressure Oldham’s way, limiting his ability to see routes through and make reads downfield.

“They had more of a blitz coming, so I had to get the ball out quicker, make better reads,” Oldham said. “A lot more pressure than I was used to.”

Still, the sophomore is 2-0 as a starter and Hockinson remains the favorite in a more evened-out 2A GSHL until another team knocks them down.

Mike Woodward is back running a familiar run-heavy offense

His name is JJ Fuerst. He stands at 5-foot-6. And he’s the cog that makes the Woodland Beavers offense go.

And he’s the latest run-happy athlete Mike Woodward has put in charge of his offense.

Woodward returns to the sidelines in 2021 after a yearlong hiatus. He stepped down as Woodland’s coach after the 2018 season, citing the wear-and-tear of the head coaching mantle. Garrett Lutgen took over for a year, but resigned after the Beavers went 2-7 in 2019.

Woodward, recharged from a year away from football, returned. He brought with him some 20 years of high school football coaching experience, first at Mountain View for five years, where he coached future Eastern Washington great Michael Roos, followed by Hudson’s Bay for three seasons and nine in California at Westview High School in the San Diego area.

Though Fuerst struggled on Saturday, he’s impressed coaches with his knowledge of the run-heavy option offense and ability to shoulder a high-volume of touches — and hits.

The Beavers, which made a 2A regional round run in 2018, are using the shortened season to continue to rebuild with Woodward back in the mix.

“Obviously a lot of fun, great to be back around the kids, coaches,” Woodward said. “It’s been a challenge wearing a mask and trying to scream at kids across the practice field for two hours straight. But we’re building, and that’s been enjoyable. Our kids are fighters and today we showed that. Couldn’t get over the hump offensively and yet our kids kept battling, I’m just really proud of them.”

After the game, Rick Steele exchanged pleasantries with Woodland coach Mike Woodward, and jogged back toward his team, huddled up and excitedly awaiting his congratulatory message. In a normal year, Steele greets his team on the field after games with a running leap into a crowd-surf.

On Saturday, he simulated the ritual from a few yards away. When he addressed the team, he gave the game ball to Northrup. The Hawks needed a player to give them a spark, he said, and Northrup came through — he was the team’s spark.

After a slow start offensively, two plays helped Hockinson build a 17-3 lead — a lead it did not look back from, thanks to Hockinson’s steady defense and a Woodland offense sputtering at times.

“It was honestly an amazing feeling,” Northrup said. “My boys blocked, we did we practiced all week for and we executed.

“I give it to that kicker, he had a boot. 99 yards, caught it on the one and (I) came down the left side, seen a hole, took it, one man to beat, shifted him a little bit down the sidelines and just turned it and burned it.”