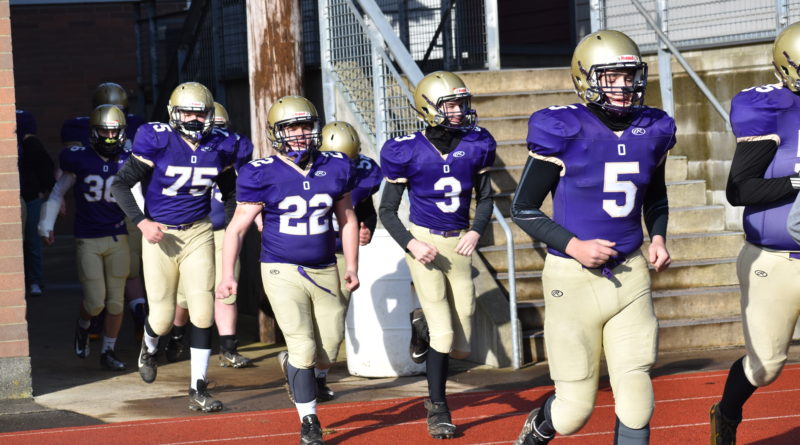 Maybe to the other Class 2B contenders, reigning state champion Onalaska has a target on its back.

But do the Loggers see themselves as marked men?

“For years, we were the underdogs,” Saade said. “We still play with that mentality.”

Led by Marshall Haight’s season-high 216 rushing yards, the Loggers pulled away from Toledo for a 34-12 victory Saturday in the first game of a 2B Central League quad-header at Montesano High School.

Gunnar Talley added three rushing scores for Onalaska, which is now on a 16-game winning streak.

Here are four observations from Onalaska-Toledo:

In 2019, no running back in the state could make 40 carries look easy better than Onalaska’s all-state fullback Ashton Haight.

He set a 2B title game record with 42 carries for 207 yards in the Loggers’ victory over Kalama for the school’s first stat title since 1986.

Well, even though Marshall Haight isn’t there yet, he is getting closer to a massive week-by-week workload.

Although he did not break off a long run Saturday, the younger Haight absorbed 32 heavy-contact carries for most of the offensive’s yardage (216 of the team’s 283 yards).

Fullback Ashton Haight and quarterback Lucas Kreger, both seniors, were two players defenses had to try and stop – unsuccessfully – all of the 2019 season.

They graduated, leaving Marshall Haight, Gunnar Talley to become the primary ball-carries, and Danny Dalsted to make the offense go under center.

All three newcomers scored touchdowns on the ground Saturday. Dalsted’s 54-yard sprint down the right sideline was a big score early in the third quarter, giving the Loggers a 20-12 lead.

“We followed a lot of great guys last year, and they taught us a lot,” Dalsted said. “Plus, our (offensive) line is fantastic. They make it a lot easier for us.”

In the months after Onalaska captured the 2B crown, Saade said little to the key returners about what to expect and how to approach the following season.

He didn’t have to. Senior Spencer Hamilton, the team’s two-way starter at left guard and middle linebacker, made all the accommodations.

“He is our through-and-through leader,” Saade said. “He is the one that gets us squared away.

“He was like, ‘Hey, let’s go play Logger football … turn the page and write our own history.'”

In a private poll with selected 2B Central coaches, the team that picked to take the biggest step back this season was Toledo – a school that has won at least one state playoff game in each of the past four seasons.

And the Indians got down 14-0 quickly against Onalaska, only to make a game of it with a last-second touchdown to close the first half – and quarterback Ryan Bloomstrom’s 1-yard sneak after a halfback pass early in the third quarter to cut it to 14-12.

But Toledo was doomed by three second-half fumbles, including two in the fourth quarter that the Loggers turned into short touchdown runs by Talley to put the game away.

One underclassmen particularly impressive for the Indians was sophomore Austin Allen, who was set to set the program’s bench press and squat records as a ninth grader last year before COVID-19 shut down the school’s weight room. He plays defensive tackle and left guard, and held up well against Onalaska’s enormous line.

“He played tough,” Toledo coach Mike Christensen said. “I am proud of the way my guys responded (after trailing 14-0). Without those three fumbles, who knows what would have happened at the end?”