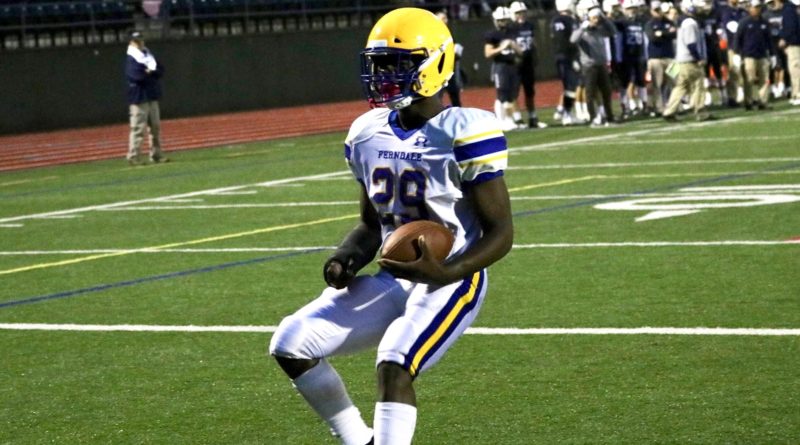 Well, the Golden Eagles were pretty close to spotless.

Led by sophomore Isaiah Carlson’s 127 rushing yards and a touchdown, Ferndale upended third-ranked 2A Lynden, 28-19, to snap a two-game losing streak in the series.

Lynden quarterback Baylor Ayres, who separated his non-throwing shoulder on the second play of the game on defense, led the Lions with 100 rushing yards on 25 carries – and completed 14 of 27 passes for 175 yards and a touchdown.

Here are five observations from the Ferndale-Lynden game:

LET THIS SINK IN – FERNDALE IS STARTING JUST FIVE SENIORS

The Lions were favored in this game because of their vast experience at the state level – and the massive size of their offensive line to protect/open holes for Ayres.

But in 48 minutes, it was Ferndale that played relatively error-free on a chilly, blustery night – no turnovers and very few penalties.

“And very few assignment mistakes,” Plenkovich said. “It was a good win for our very young team.”

VERY SOON, CARLSON IS GOING TO BE AN ALL-STATE RUNNING BACK

It is hard to remember that Carlson’s career at Ferndale got off to an inauspicious start in 2019: He broke his wrist during the team’s jamboree, and missed a large chunk of the regular season.

Carlson 2.0 is going to give this offense a headliner very soon.

The impressive thing about his game-high 127 rushing yards was how the 6-foot-2, 215-pounder made something out of nothing on a few key runs against a good Lynden front.

“He’s got a chance to be very special, for sure,” Plenkovich said. “And that was one thing we were waiting for – a physical finish to his runs, which we saw tonight.”

The Golden Eagles’ Wing-T rushing attack has never been a bell cow-runner type offense. If all goes well, Carlson should lead the team in rushing – but he has two teammates that could be right on his heels.

Junior Ryan Pelton is the bullish fullback who churns out the hard yards inside. He finished with 76 yards on 14 carries and a touchdown Friday night.

“He has great vision,” Plenkovich said.

And fellow junior Thomas Broselle ripped off big-chunk runs getting to the perimeter. He had 96 yards on 13 carries with a pair of rushing scores.

“He’s got great speed, and has a funny way of running. He is hard to tackle,” Plenkovich said. “His legs and hips are going everywhere, and he makes a lot of guys miss.”

Arguably the play of the game – at least the biggest one in the first half – was Lynden’s final call inside the Golden Eagles’ 10-yard line before halftime.

With one second to go, the Lions set up a rollout pass for Ayres. Hatchett (6-2, 285) crashed through the middle of the line from his defensive tackle spot and headed directly toward the Lynden’s senior quarterback, disrupting the timing of the play – and forcing an errant throw that fell incomplete. Ferndale led 14-6 at intermission.

Plenkovich said one of the surprises of the game was how well the middle of his defensive line held up, led by Hatchett and ninth grader Camden Raymond.

Hatchett is the same type of athletic big man as his brother, Geirean, who is now with the Washington Huskies.

“We had eight practices in November, and since we knew there were no games, we had the linemen play 7-on-7 against the other guys,” Plenkovich said. “Landen was out there making great catches and doing athletic stuff.”

JUST AS MUCH, LYNDEN WAS DONE IN BY CRAZY MISFORTUNE

Lynden coach Blake VanDalen thought he had a good plan in defending Ferndale’s Wing-T attack – and it revolved around safety Kaleo Jandoc.

But Jandoc came off after the first play of the game with a serious shoulder injury.

And on the next play, Ayres got hurt, too.

“We lost 1A and 1B of our scheme, and they drove down and scored,” VanDalen said.

Even with the injuries, Lynden hung around, trailing 14-13 in the third quarter.

But after Ferndale quarterback Haiden Rasmussen’s fourth-and-9 pass from the Lions’ 15 was a bit high over intended Jazen Guillory, a pass interference penalty was called, giving the Golden Eagles a first and goal at the Lynden 4-yard line.

“It was just a bummer,” VanDalen said.